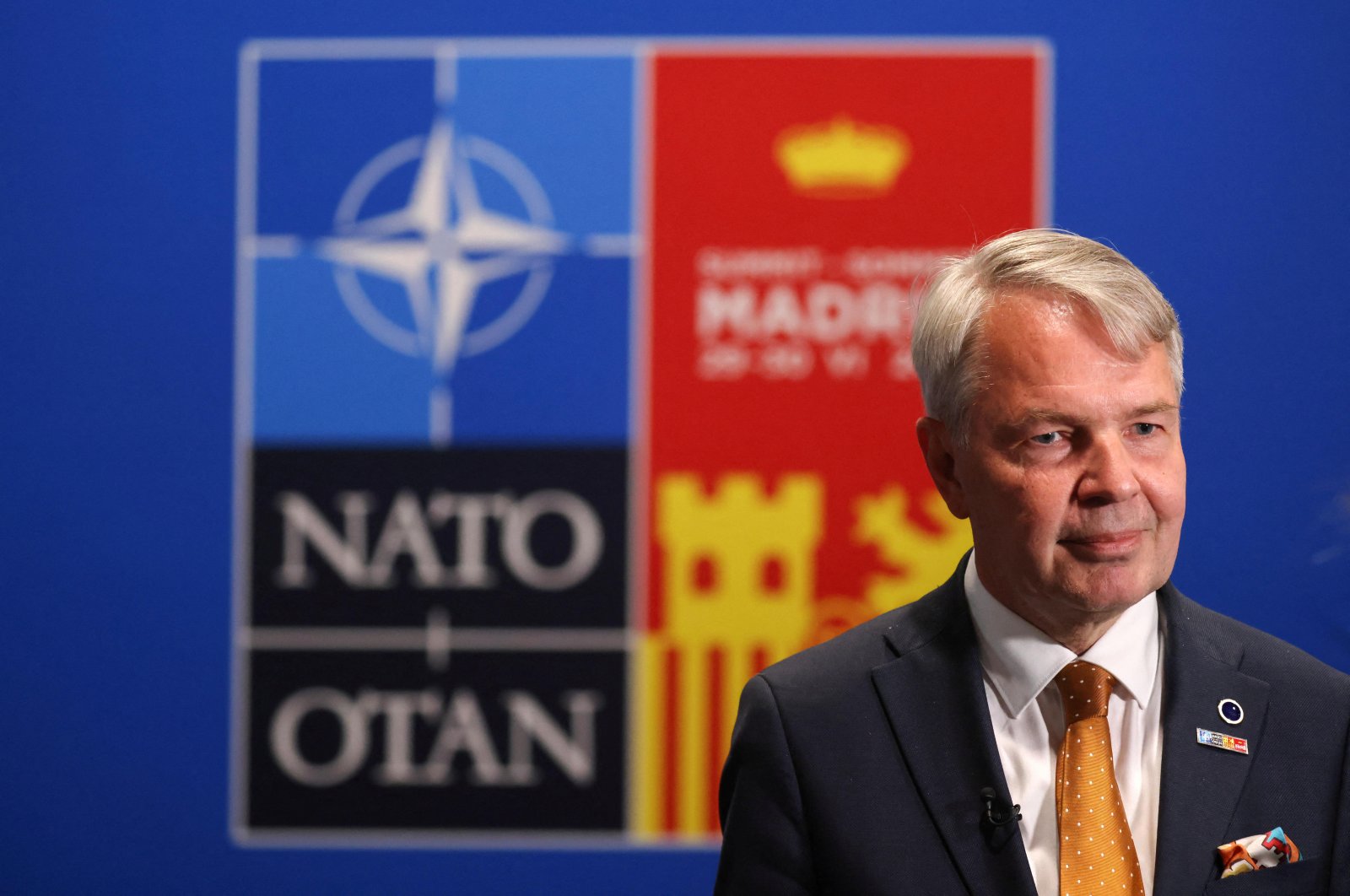 Haavisto said that Helsinki already informed Ankara that it is not "giving support" to the PKK, its Syrian branch YPG or Gülenist Terror Group (FETÖ) organizations, adding that cooperation with their authorities regarding "any additional information on individuals and groups noted by Turkey "will certainly be established "soon."

The only thing Finland was part of was a COVID-19 vaccination program in Syria, which the Turkish delegation considered humanitarian aid that causes no problem, he continued.

Noting that the PKK terrorist group was the first issue with Turkey over their NATO bid, Haavisto said: "So we have been discussing that quite a lot with Turkey. We have a common understanding of the PKK, it is a terrorist organization and both in Finland and Sweden; it's a forbidden organization and of course, we are ready to take additional steps against the PKK and also open to receiving any information from Turkey on this issue."

He noted that Finland and Sweden also gave commitments regarding the YPG and FETÖ under the deal.

The minister was referring to Article 4 of the memorandum, which says: "Finland and Sweden will not provide support to YPG, and the organization described as FETÖ in Turkey."

"Finland and Sweden reject and condemn terrorism in all its forms and manifestations, in the strongest terms. Finland and Sweden unambiguously condemn all terrorist organizations perpetrating attacks against Turkey, and express their deepest solidarity with Turkey and the families of the victims," the article conditions.

He underlined that everything will be done according to their national legislation and added: "We cannot change laws just in a memorandum but the cooperation is there."

Haavisto said the arms export has been also an issue with Turkey since the beginning of Ankara's operations in Syria where the country fights against terrorist groups to safeguard its border.

"There have been some restrictions on the arms export and of course, when we will become a member of the same military alliance that will, of course, have an impact also on our decisions, and when we have to take care of it so that the alliance can have a common defense and so forth we support each other," he said.

Turkey, Finland and Sweden confirmed that now there are no national arms embargoes in place between them under the signed memorandum.

Finland was not expecting to have such "good progress" with Turkey in Madrid regarding the signed memorandum that allows the Nordic nation's NATO bid, Haavisto said.

"I have to say that we didn't expect so many troubles with Turkey ... but when these problems occurred, we, of course, wanted to solve the issues as rapidly as possible," he said.

Helsinki "didn't expect so good progress here in Madrid because we were either afraid that still the remaining issues are so difficult that this will create additional delays, and we have heard of course, from Turkey that this might take the time up to the next elections or so it will be next year and of course, we have been concerned about that news because it's also about our security," he said.

The minister said that now they have temporary security assurances from many NATO countries, but of course, to be a member under Article 5 is another thing.

Turkey, Finland and Sweden signed a memorandum Tuesday on the Nordic countries' bids for NATO membership following four-way talks in Madrid. The signed memorandum addresses Turkey's concerns about arms exports and the fight against terrorism.

Sweden and Finland formally applied to join the alliance last month, a decision spurred by Russia's war on Ukraine. But Turkey, a longstanding member of the alliance, voiced objections to the membership bids, criticizing the countries for tolerating and even supporting terrorist groups.

On the ratification process for the NATO membership, Haavisto said that there are "some governments who are very eager to ratify very rapidly there is almost a competition who will be the first one."

However, he underlined that parliaments of the 30 member countries will enter summer break until autumn, so the process may begin before the break but some countries will process it afterward.

Noting that Russian President Vladimir Putin was thinking Finland's application to NATO is "an unnecessary step because nobody is threatening Finland," Haavisto said that it is "important" to keep communication with the neighboring country Russia "in all circumstances" to keep the border peaceful in the future.

"But of course, at the same time, we have seen Russian behavior against Ukraine, a very surprising attack to try to change the government through military force," he said. "So the security situation is very vulnerable in Europe."

He added that Finland is using more than 2% of its budget for military expenses, keeping its military with a reservist of almost 300,000 men and women in "good shape."

Asked how the ties between Helsinki and Ankara were affected during the NATO application process, the minister said: "I think actually we are one of those countries that have had excellent relations with Turkey."

"We were in 1999 one of those strong supporters of Turkey to access to European Union," he added.

He noted that he has been maintaining "good contacts" with his Turkish counterpart Mevlüt Çavuşoğlu.

On Russia's war in Ukraine, he said that Finland has been "very pleased" that Turkey has taken the role of mediator in the conflict.

"Of course, this was a little bit nervous time when Turkey was the one who was blocking us but I think on Tuesday when we shake hands after the deal, I think everybody was happy," he said. "So I think we are back to normal."