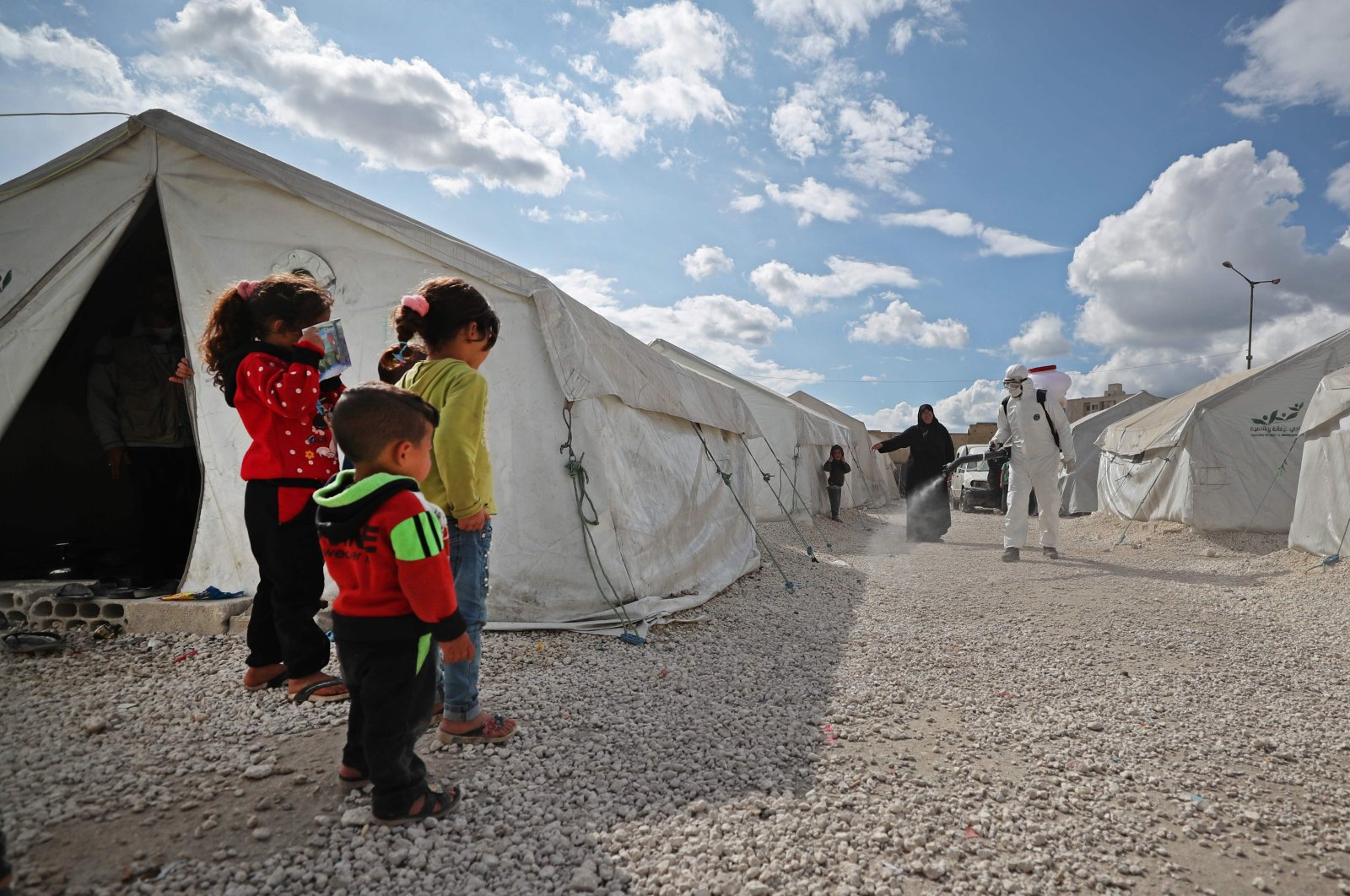 Displaced Syrian children watch as a sanitation worker disinfects their camp during a campaign to limit the spread of the coronavirus, Idlib, northwestern Syria, April 9, 2020. (AFP Photo))
by DAILY SABAH Apr 15, 2020 11:30 am
Edited By Dilara Aslan

Turkey's foreign minister says the world should provide aid to Syria because the war-torn country is incapable of responding to the coronavirus outbreak due to damaged health infrastructure, and the U.N. Security Council was late in its response to the coronavirus crisis as it has been with other global challenges

Foreign Minister Mevlüt Çavuşoğlu urged the international community Tuesday to immediately act on aiding Syria amid diminishing relief efforts to combat the coronavirus pandemic while he criticized the U.N. Security Council for its late response to the outbreak.

Speaking at a virtual conference by the Atlantic Council in Turkey and the Turkish Heritage Organization, Çavuşoğlu underlined that Turkey is the main source of aid and the pandemic is making efforts "more difficult" in Syria.

Çavuşoğlu especially highlighted Syria’s northwestern Idlib province, which has been the target of the Bashar Assad regime’s latest campaign. Since last December, the last opposition bastion has been under heavy attack by the regime and Russian warplanes, which has caused almost 1 million people to flee the province, an incident described by the U.N. as the greatest one-time displacement since the civil war erupted in 2011.

Saying that Idlib desperately needs foreign assistance and a solid global plan, which currently does not exist, Çavuşoğlu added, "We need actually concrete and timely and unconditional support from our allies.”

The minister criticized the U.N. Security Council for being late in responding to the pandemic that has infected at least 2 million people worldwide and has claimed the lives of thousands.

"Everybody agrees that the Security Council has been late to respond to COVID-19. They met to discuss the pandemic almost four months after the outbreak," the top diplomat said. "This is unbelievable, outrageous.”

The virus known as COVID-19 originated in China’s Wuhan in December; however, the U.N. held its first meeting last week, during which Secretary-General Antonio Guterres said engagement of the Security Council will be "critical" to mitigate peace and security implications of the pandemic.

Çavuşoğlu broadened his criticism and said the Security Council failed to "properly" address other international conflicts as well and cited "Syria is only one of them."

"Look at Yemen, Libya, others. Its structure needs to be adapted to global challenges as well. Turkey is a strong advocate of Security Council reform as President (Recep Tayyip) Erdoğan repeatedly underlined the world is bigger than five," he added.

"We must obviously admit that the U.N. Security Council is neither inclusive nor representative," he said, "We don't have a better tool at hand at the moment.”

"We should do our best to support it, but we should actually intensify our efforts to reform the U.N. Security Council," he concluded.

According to running data by U.S-based Johns Hopkins University, Syria has at least 29 coronavirus cases and two deaths currently, but human rights activists warn the virus could sweep conflict-hit areas.

In late March, U.N. aid chief Mark Lowcock said the first confirmed cases of COVID-19 infection in Syria are just the “tip of the iceberg” of an outbreak that could have a “devastating impact” on the war-ravaged country.

Fighting has calmed since March when Ankara agreed on a cease-fire with Moscow, which has supported Damascus with heavy airpower. The cease-fire in Idlib was reached in Moscow last month after talks to contain the escalating conflict. The meeting came after regime forces attacked Turkish soldiers and civilians on the ground, causing Turkey to launch a renewed operation in Syria. The cease-fire deal came amid recent clashes between the Turkish military and Syrian regime forces that left many dead on both sides.

Yearslong sieges caused the deterioration of the physical health of many people, who have suffered malnutrition and widespread poverty. Another risk is that people often live in overcrowded places and camps – ideal for the spread of the virus. The camps are generally in poor condition with a lack of access to water, hygiene, medical aid and food.