Foreign Ministry: Turkey won't allow Greece to carry out provocations across from its shores 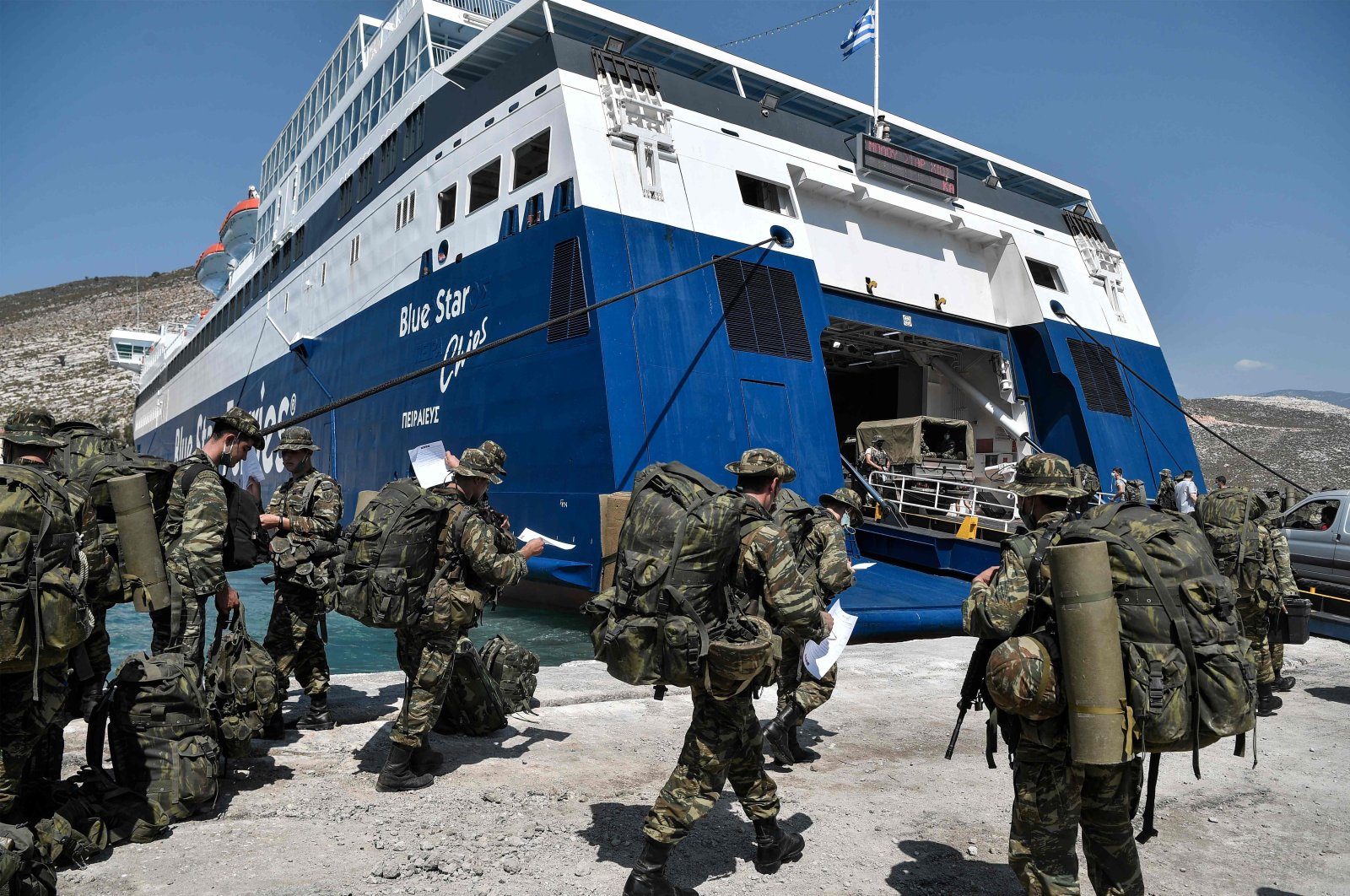 Greek soldiers prepare to board a ferry at the port of the tiny Greek island of Kastellorizo, officially Megisti, the most southeastern inhabited Greek island in the Dodecanese, situated 2 kilometers off the southern coast of Turkey. (AFP Photo)
by daily sabah
Aug 30, 2020 10:17 pm

Turkey has criticized Greece for military deployment to the demilitarized island of Kastellorizo, calling it a provocation and a display of its true intentions in the Eastern Mediterranean

Turkey will not allow Greece to carry out provocations by building up arms on a legally demilitarized island in the Eastern Mediterranean, the Foreign Ministry said Sunday, as pictures of Greek military officers arriving on the island emerged on the media.

In response to a question about reports on Greece sending military supplies to the island of Kastellorizo (Megisti-Meis), Foreign Ministry spokesman Hami Aksoy said the island has had a demilitarized status since the 1947 Paris Peace Treaties. He said Turkey will not allow such provocations to be carried out across from its shores and rejects attempts to change the island’s status.

The island of Kastellorizo is only 2 kilometers (1.2 miles) from the Turkish shore.

“If the press reports are true, this is a new indicator of Greece’s lawlessness and its true intentions in the Eastern Mediterranean,” Aksoy said, adding that such provocative acts will not benefit Athens.

“Greece will be the one to lose if it continues to take steps that will heighten tensions in the region,” the spokesman said, as he noted that Turkey is determined to protect all of its rights and interests in line with international law.

"Greece’s attempt to arm the island of Kastellorizo is a new example of piracy. It is foolish of Greece to point guns at Turkey’s shores and Greece has become the representative of pirate policies in the Aegean and Mediterranean seas," Çelik said Monday.

Çelik also criticized Greece for refraining from solving problems through diplomacy and warned that Athens will be unsuccessful.

"Turkey is the most reliable contact if Greece wants to resolve problems through the law," Çelik said, adding that Athens will realize its decision to carry out military drills with France was a wrong choice.

"Greece will learn that we have strong responses to all of the steps it has taken," Çelik added.

Meanwhile, Aksoy also responded to recent remarks by French President Emanuel Macron, who claimed that he set red lines with Turkey because the country respects “acts” rather than “words.”

“When it comes to Mediterranean sovereignty, I have to be consistent in deeds and words. I can tell you that the Turks only consider and respect that. If you say words that are not followed by acts ... What France did this summer was important: It’s a red line policy. I did it in Syria,” Macron said Friday.

Aksoy said Macron, who “thinks” he set red lines with Ankara, will be met with Turkey’s resolute stance regarding the Eastern Mediterranean.

“It is about time that those who get above themselves face the truth. The period when they dictated their imperialist goals by drawing lines on maps is over,” Aksoy said.

The foreign ministry spokesman argued that the only way to resolve the ongoing crisis in the region is by establishing dialogue and cooperation among neighboring countries, rather than provocations by extraterritorial actors.

Since the discovery of significant gas reserves in the region a decade ago, countries have been engaged in renewed disputes over maritime borders, while international law presents few remedies. The deepening rift between Athens and Ankara widened with Turkey’s decision to enhance energy exploration activities in the Eastern Mediterranean and the deal Turkey made with Libya’s official government.

The Turkish government disputes Greece’s claim to exclusive rights, arguing that islands should not be included in calculating sea boundaries between countries.

Ankara criticizes Greece for its “maximalist” position, as it claims that the tiny island of Kastellorizo, which is about 580 kilometers away from the Greek mainland, should have a 40,000-square-kilometer (15,444-square-mile) continental shelf area, which is almost half of Turkey's Gulf of Antalya.

France has been supporting Greece in the crisis and joined Italy, Greece and the Greek Cypriot administration in three-day air and sea military exercises in the region last week.

The European Union's executive on Monday called for dialogue with Turkey.

Should dialogue not bear fruit, a spokesman for the European Commission told a briefing Monday, the EU has already moved toward sanctions.

That came after the 27 EU foreign ministers last week discussed tensions between bloc members Greece and the Greek Cypriot administration and NATO ally Turkey. A senior EU diplomat said separately Friday of the situation: "As well as sticks (sanctions), there will be carrots too to get Ankara to engage seriously in dialogue. These carrots could be progress on a new customs union and more money for the refugee program," the person said under condition of anonymity.

Greece is planning to spend 10 billion euros (TL 87 billion) to boost the military by buying arms from France in the next five years, as the country is trying to shore up its presence in the Eastern Mediterranean amid tensions with Turkey.

The report said that the government has decided to end the budget cuts in defense spending, which had been imposed as a result of the economic crisis in the country.

The government plans to initially spend 1.5 billion euros to place orders for necessary spare parts for the 44 French Mirage fighter jets, most of which are currently grounded, as well as malfunctioning helicopters used by the navy and army.

The negotiations to purchase 12 to 18 Rafale-type jets are still ongoing, the report said, adding that Greece also plans to modernize four frigates and buy new ones worth up to 2.5 billion euros.

Greece will also make some purchases from its supporters Israel and the United Arab Emirates (UAE), the report said.

Athens is also expected to sign a new defense cooperation agreement with France possibly in a ceremony attended by French President Macron and Greek Prime Minister Kyriakos Mitsotakis on Sept. 10.