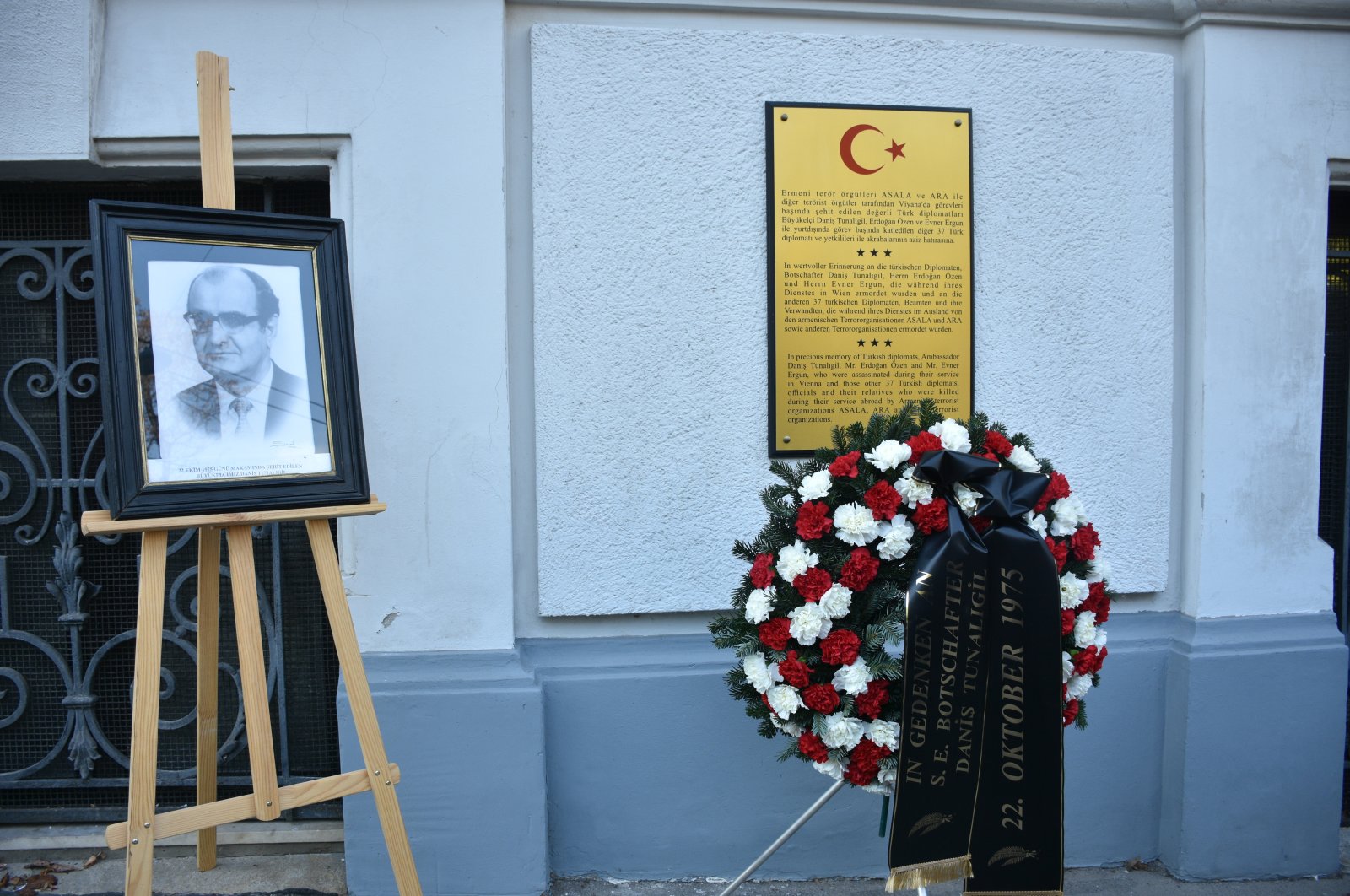 Former Turkish Ambassador to Vienna Danış Tunalıgil, who was killed by Armenian terrorist groups, is remembered at the Turkish Embassy in Vienna, Oct. 22, 2020. (AA)
by DAILY SABAH WITH AA
Oct 23, 2020 10:58 am

Turkey on Thursday commemorated its diplomat who was killed in an Oct. 22, 1975 terrorist attack in Vienna, Austria.

"We remember with respect our martyr, Ambassador Daniş Tunalıgil, assassinated in a heinous attack by the terrorist organizations ASALA and JCAG in Vienna on 22 October 1975," the Foreign Ministry said on Twitter.

A total of 31 Turkish diplomats and their family members have been killed around the world by Armenian terrorist groups.

The vast majority of the attacks were conducted by the Armenian Secret Army for the Liberation of Armenia (ASALA) and the Justice Commandos of the Armenian Genocide (JCAG) terrorist groups.

The bloody attacks started back in 1973 with the assassination of Consul General Mehmet Baydar and Consul Bahadır Demir in Los Angeles by Gourgen Yanikian, an Armenian.

Founded in 1975 in Beirut, Lebanon, during the Lebanese Civil War, the ASALA is responsible for hundreds of bloody terror acts. According to "Armenian Terror," a 2006 study by Ömer Engin Lütem, a former Turkish diplomat, the killings spanned continents, taking place in the U.S., Austria, France, Italy, Spain, Lebanon, Greece, Switzerland, the Netherlands, Canada, Portugal, Iran and the U.K.

During a ceremony in memory of Tunalıgil, the Turkish Embassy in Vienna condemned the terrorist attack on its 45th anniversary on Thursday.

Speaking at the event, Ankara's envoy to Vienna, Ozan Ceyhun, noted that Tunalıgil was the first Turkish ambassador killed by ASALA and JCAG.

"Although this sordid attack committed by Armenian terrorists took place 45 years ago, as the members of Turkey's Vienna Embassy, we live through this event every day, whenever we go through the rooms, offices of this building; we condemn the perpetrators of it," Ceyhun said.

Pointing to the fact that the terrorists have never been captured or punished for their crimes, Ceyhun said the incident is still quite painful for the families of the victims.