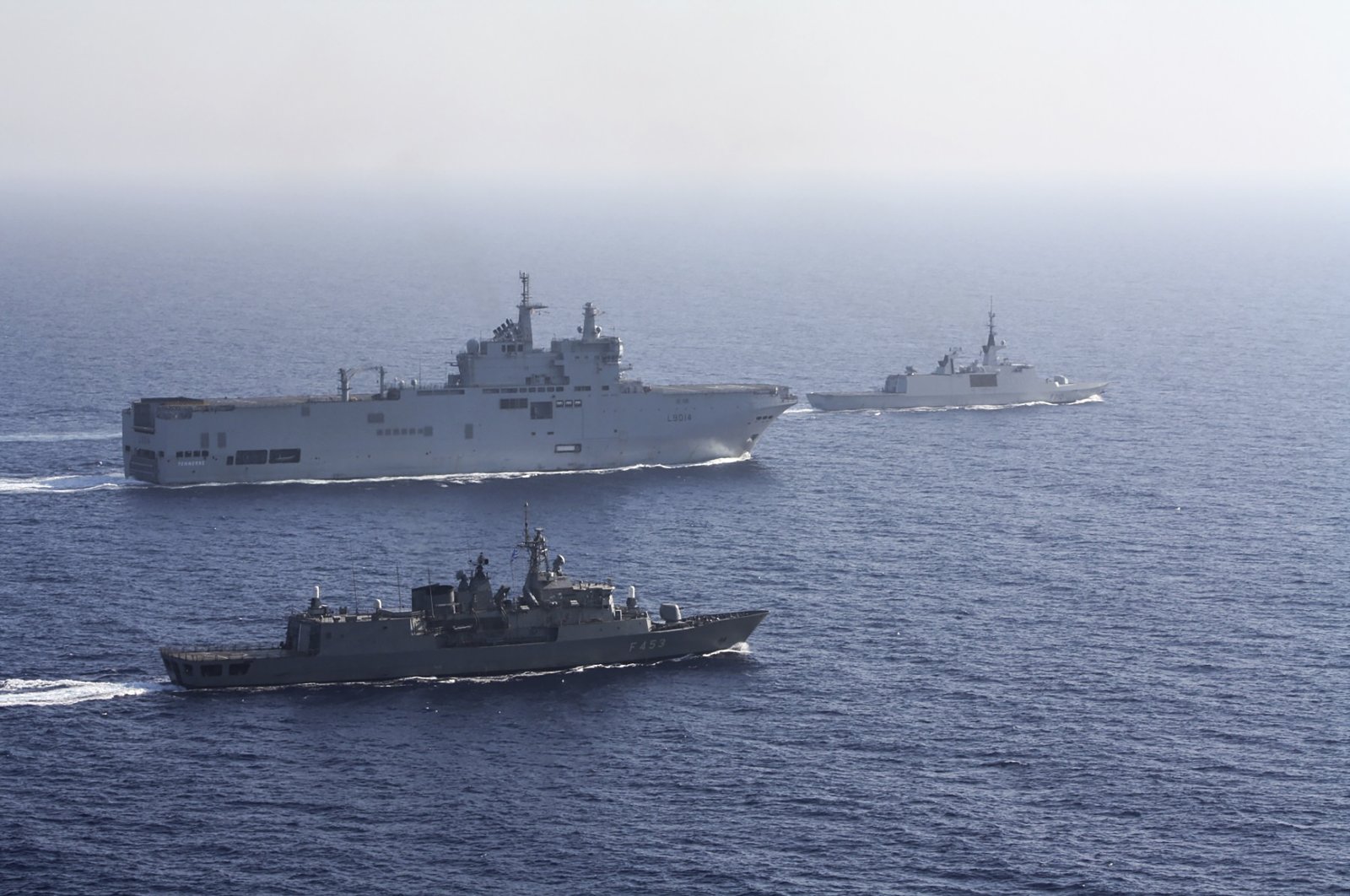 A French Tonnerre helicopter carrier, the rear left is escorted by Greek and French military vessels during a maritime exercise in the Eastern Mediterranean, Aug. 13, 2020. (AP Photo)
by Daily Sabah with AFP Aug 23, 2020 1:08 pm
RECOMMENDED

France’s recent sending of warships to support Greece against Turkey in the Eastern Mediterranean continues to draw criticism as an attempt to fuel the tensions in the region.

Retired Adm. Cem Gürdeniz, the father of Turkey's maritime "Blue Homeland" doctrine, said Saturday that France's decision to send warships to help Greece in its Mediterranean standoff with Ankara was adding "fuel to the fire."

"If France continues such provocative actions ... that would not serve regional peace and stability – that would add fuel to the fire and France should avoid that," Gürdeniz told Agence France-Presse (AFP).

"I'm fed up with (French President Emmanuel) Macron's everyday verbal threats ... For many Turks now, France is acting like an 'enfant terrible.' Can you imagine, they are threatening Turkey?" he added.

The discovery of major natural gas deposits in waters surrounding the island of Cyprus and the Greek island of Crete has triggered a scramble for energy riches and revived old regional rivalries. The biggest tensions are between historically uneasy NATO allies Turkey and Greece. EU foreign ministers convened an emergency video conference last week after Greek and Turkish warships collided in hotly disputed circumstances.

"If Greece pulls the trigger, it will be the end of NATO," Gürdeniz said, implying that Turkey would then withdraw from the Cold War-era military alliance.

He added that European countries should put pressure on Greece so that it abandons some of its maritime claims.

Turkey last year informed the United Nations of the boundaries of its continental shelf following a maritime delimitation deal inked with Libya’s U.N.-backed Government of National Accord (GNA) on Nov. 27, 2019.

The U.N. Convention on the Law of the Sea (UNCLOS) describes the continental shelf within the scope of its legal definition as a stretch of the seabed adjacent to the shores of the particular country to which it belongs.

As part of hydrocarbon exploration activities, the Turkish Naval Forces on June 21 issued a NAVTEX for seismic surveys by the Oruç Reis and two supporting vessels in waters south of the Greek islands of Rhodes, Karpathos and Kastellorizo through Aug. 2.

Greece said this was an attempt by Ankara to encroach on its continental shelf, an allegation rejected by the Turkish government.

France, already at odds with Turkey over Libya and various developments in the Middle East, sent its own ships into the region to help Greece, prompting Ankara to warn it would retaliate against any attack.

"Blue Homeland is a symbol of the 'maritimisation' of Turkey," Gürdeniz said, a concept which "is aimed at defining the maritime jurisdiction of areas surrounding Turkey."

Gürdeniz first used the term "Blue Homeland" in 2006 when he was head of the Turkish navy's plan and policy division. His vision covers more than 460,000 square kilometers (175,000 square miles) of Turkey's maritime borders, including the waters surrounding certain Greek islands.

He said Turkey needed to secure these areas for its welfare, defense, security and "even for its happiness."

"Even if Turkey is alone in this fight" and even if sanctions are imposed, Gürdeniz said, "Turkey will not give up."

Gürdeniz added that "Turkey should think cooly, soberly and prudently," and said he saw no need for outside mediation, suggesting that hostilities will only end when Greeks and Turks can sit down and talk their problems out.

Also speaking to Turkey's public broadcaster TRT Haber, Gürdeniz said that the gas exploration activities are a strategic present from the Blue Homeland to the Turkish nation.

He also added: “The interests in both seas (the Mediterranean and Black Sea) are not only focused on energy. They are also focused on geopolitics.”