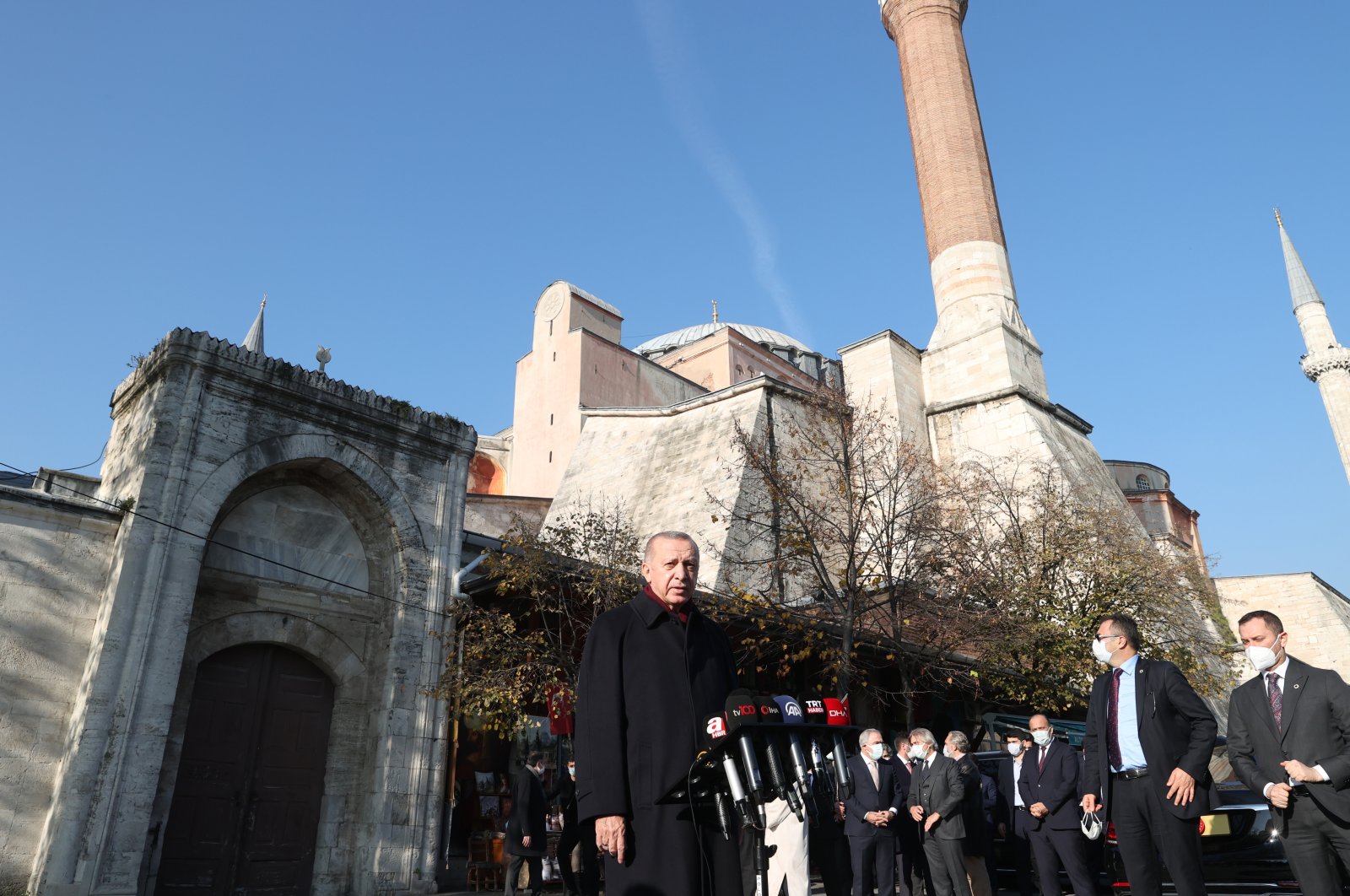 President Recep Tayyip Erdoğan on Friday stated that France’s mediating position in Nagorno-Karabakh is no longer valid due to its recent controversial decisions.

Speaking to reporters in front of the Hagia Sophia Grand Mosque in Istanbul following Friday prayers, Erdoğan said that he agrees with the suggestion of his Azerbaijani counterpart, President Ilham Aliyev, who called on France to give Marseille to the Armenians if they are so eager for the latter to have sovereignty.

The president also criticized French President Emmanuel Macron for his misguided policies, saying that France is going through an extremely dangerous period as a result of its president.

“Macron is trouble for France. My wish for France is to get rid of Macron as soon as possible. Otherwise, they will have to deal with the yellow vest protesters for longer, or ‘red vests’ may appear as well,” Erdoğan said.

France’s National Assembly approved a resolution Thursday calling on the government to recognize Nagorno-Karabakh as a “republic.” After passing last month in the Senate, the resolution, which has symbolic value, was adopted in the assembly with 188 “yes” votes against three “no” votes, while 16 deputies abstained from voting.

With the decision, the French government was called on to recognize the “Nagorno-Karabakh Republic” and to reevaluate Turkey’s membership process for the EU with its European partners due to Turkey’s role in the Nagorno-Karabakh conflict.

French Foreign Minister Jean-Yves Le Drian rejected the recognition call, saying Armenia did not require it. He also stressed that if such a decision is made, France will remove itself from the Minsk Group and give up its mediator role.

France has been criticized for abandoning its neutrality and supporting Armenia in the Nagorno-Karabakh conflict as one of the co-chair countries of the Minsk Group, which was set up by the Organization for Security and Co-operation in Europe (OSCE).

Previously, Azerbaijan’s parliament called for France to be stripped of its mediation role in the Nagorno-Karabakh conflict to punish the French Senate for adopting the resolution.

Relations between Turkey and France have deteriorated over the Eastern Mediterranean, but the two allies disagree on other major issues including the conflicts in Syria and Libya and Nagorno-Karabakh.

Erdoğan strongly criticized Macron and said he needs mental treatment after he launched an extensive witch hunt against the Muslim community. Macron called Islam a problematic religion that needs to be contained. Many nongovernmental organizations (NGOs) and mosques in France have been shut down, while assaults against Muslims have peaked.

The two countries are also on opposing sides in Libya, where Ankara has backed the United Nations-recognized Government of National Accord (GNA) in Tripoli against a 2019 offensive by putschist Gen. Khalifa Haftar. France is suspected of supporting Haftar, but officially insists it is neutral in the conflict.

Turkish officials have decried France’s interference in the Eastern Mediterranean dispute, given it has no territory in the region. Commentators have argued that President Emmanuel Macron is trying to distract from his political failures at home.