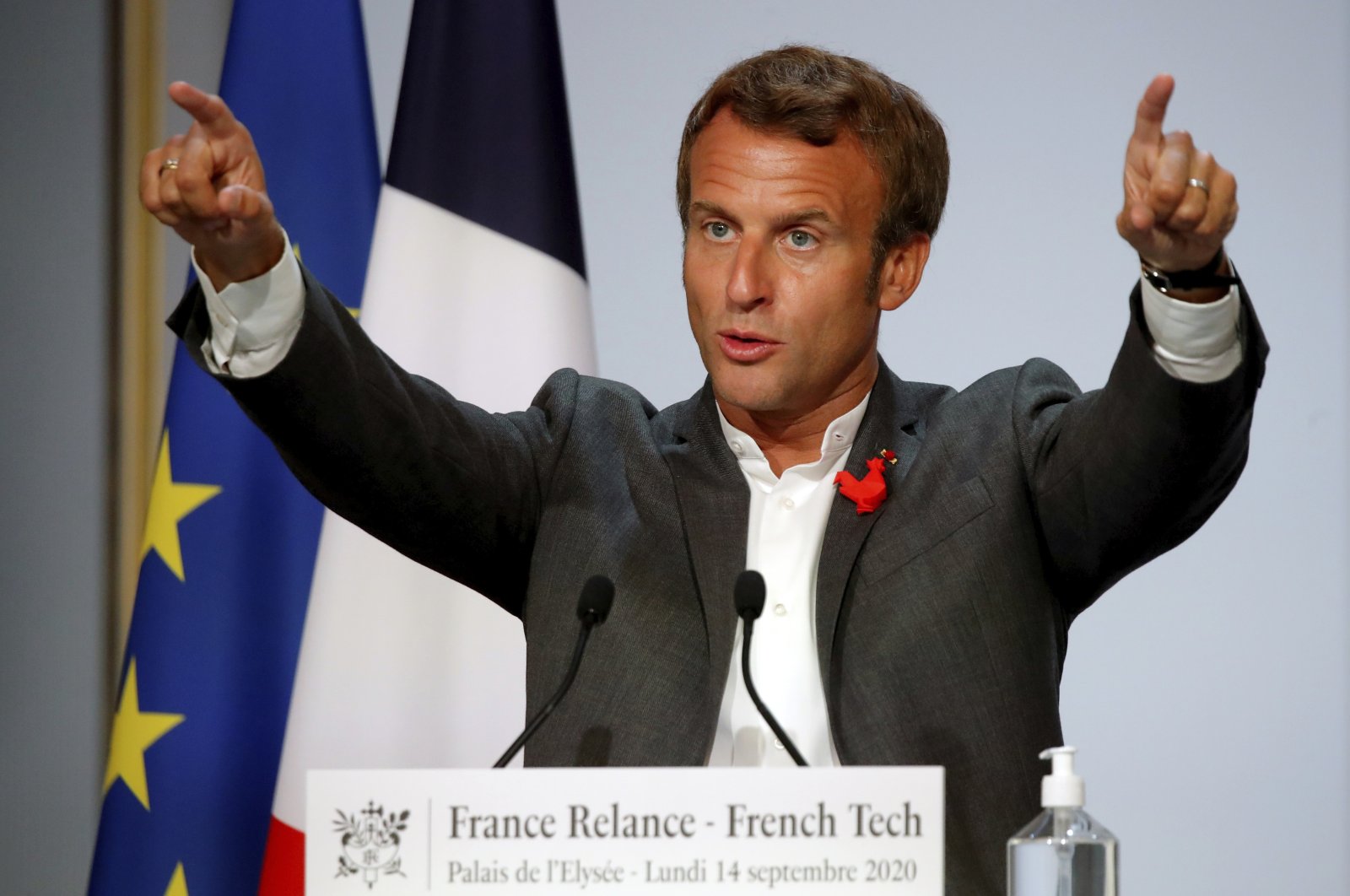 French President Emmanuel Macron gestures as he delivers a speech to French tech startups at the closing ceremony of the National Council of French Tech Capitals and Communities (CNCC), at the Elysee Palace in Paris, Sept. 14, 2020. (AP Photo)
by daily sabah Sep 16, 2020 12:15 pm

French experts have criticized President Emmanuel Macron for stoking tensions between Turkey and Greece in the Eastern Mediterranean, arguing France needs to take an impartial stance and encourage dialogue rather than hostility in the region

French President Emmanuel Macron needs to adopt a more neutral stance in the Eastern Mediterranean crisis between Turkey and Greece, rather than heighten tensions, French experts say, noting that Macron’s controversial stance is a mistake that needs to be fixed.

Jean Dominique Merchet, a military and international strategy expert who writes for French newspaper L’Opinion, said Macron needs to reduce tensions and ensure that the two sides sit at the negotiating table.

“However, France, unfortunately, did not choose this path and decided to side with Greece,” Merchet said, adding that Macron had chosen to support Greece rather than act as a mediator between the two countries.

Noting that the conflict between the two countries was not new, the writer alluded to Christopher Clark’s book “The Sleepwalkers,” saying that European powers allowed themselves to be drawn into a war in the name of solidarity between allies.

He argued that decreasing tensions in the Turkey-Greece conflict over rights to access natural resources in the Eastern Mediterranean was the desire of many European Union member states, as well as NATO.

“France should therefore not put itself on the wheel of the Greek conservative government,” Merchet said, warning against French cooperation with the United Arab Emirates (UAE), which he referred to as “sworn enemies” of Turkey.

Relations between Turkey and the UAE have hit an all-time low, as Turkish President Recep Tayyip Erdoğan recently announced that Ankara may suspend its diplomatic relations with the Abu Dhabi administration following the UAE-Israel deal.

Turkish officials note that the UAE supported terrorist organizations hostile to Turkey and had become a useful political and military tool for other countries.

The UAE is a part of a Saudi-led coalition in Yemen that has launched a devastating air campaign to roll back Houthi territorial gains made in 2015, further escalating the crisis in the war-shattered country. In Libya, Abu Dhabi supports putschist Gen. Khalifa Haftar and wants to oust the legitimate U.N.-recognized Government of National Accord (GNA).

Abu Dhabi also supports the Bashar Assad regime in Syria in its offensive against democracy and civil rights, and Turkish officials have accused the UAE of offering financial and logistical support to the PKK terrorist group to carry out attacks in Turkey.

Meanwhile, Charles Saint-Prot, a French political scientist and director of the Observatory of Geopolitical Studies in Paris, also argued that Macron was making a mistake by supporting Greece in the Eastern Mediterranean.

Criticizing Macron for being far from a leader suitable to represent France, Saint-Prot said his stance was rather dangerous and encouraged Greece and the Greek Cypriot administration to heighten tensions. He noted that Macron’s anti-Turkey policies also contradicted France’s political customs.

“Macron belongs to the generation that has no knowledge of post-1968 history, no sense of historical conscience and who prioritizes emotions over (universal) wisdom,” Saint-Prot said, adding that emotions were not the best guide when it came to politics.

He continued by questioning how Greece would be able to pay the price for 18 Rafale-type fighter jets that Athens bought from France.

The geopolitical expert continued by saying that Washington, London and Berlin were all laughing at Macron’s position as incomprehensible.

Mocking Macron’s recent remarks about President Recep Tayyip Erdoğan, Saint-Prot said it was a positive thing for the French president to “not be angry” at the Turkish people.

“Macron uses Turkey to show that he’s strong, but he’s not aware that he’s making a large part of the world laugh,” Saint-Prot said.

Criticizing Macron for sounding like far-right politicians on the Eastern Mediterranean issue, Saint-Prot warned him that he is on the wrong path as foreign policy is not the way to win elections in France.

“The reason why Macron has been implementing anti-Turkey policies could be because of elections,” he said.

Noting that Macron consulted with no one in terms of foreign policy, Saint-Prot said the French president knew nothing about the Mediterranean and that it was wrong for France to support countries like Russia, the UAE and the U.S., which do not have a shore in the region, and make an enemy out of Turkey, which has the longest share of Eastern Mediterranean coastline.

“France needs to try to come to an understanding with Turkey. There could be disagreements, but Macron and the French government now hold a grudge against the Turks. This is inconceivable and does not suit France’s role in the Mediterranean,” Saint-Prot added.

Greek Prime Minister Kyriakos Mitsotakis announced Tuesday that his country was finally ready to sit on the negotiating table with Turkey.