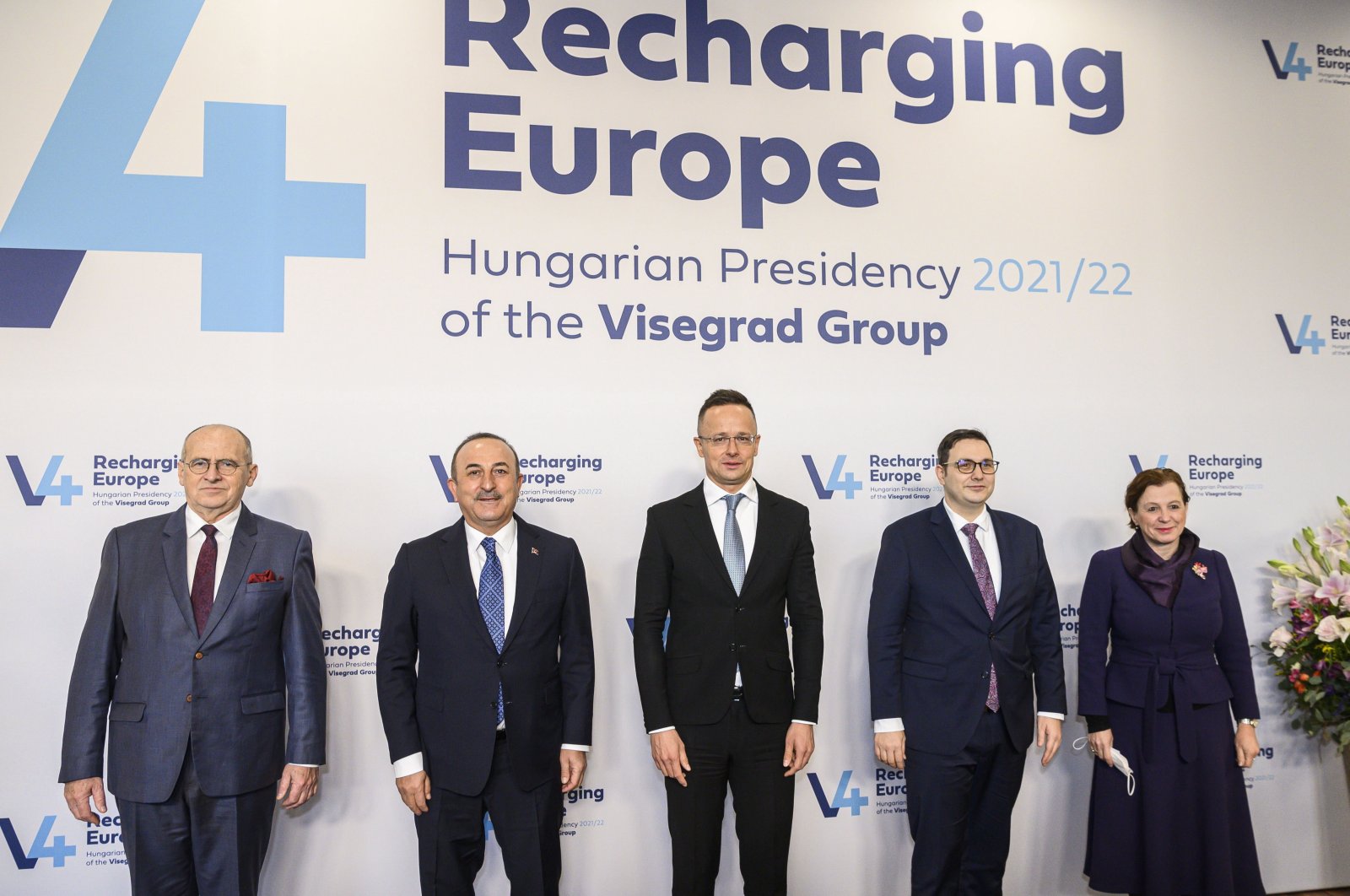 In the sixth meeting between Turkey and the Visegrad Group, the issue of irregular migration and the situation in Afghanistan were in the spotlight, with countries vowing to enhance cooperation in these areas for further regional stability

“I told my friends of the importance of gradual engagement with the current Taliban administration, without recognition, and the effect Turkey's engagement has had until today," Çavuşoğlu said at the sixth meeting of the Visegrad Group of four Central European nations.

Turkey’s top diplomat said the latest developments in Afghanistan and the Balkans, the fight against irregular migration, how to improve economic relations after COVID-19, Turkey-EU relations and Turkey-Visegrad ties were discussed at the gathering.

“The situation of millions of people displaced in Afghanistan, and Syria is a source of concern for all of us,” he underlined, pointing to the need for cooperation regarding migration.

“In terms of migration, cooperation, fair burden-sharing as well as voluntary and safe returns are especially important.”

“The new situation in Afghanistan is showing us that we face a new humanitarian crisis and the risk of mass migration,” he said, adding that Afghanistan, its neighbors and Afghan people living in these countries must be supported by the international community within the scope of the United Nations' emergency call.

The emergency in Afghanistan, with millions facing hunger as winter sets in, has caused mounting alarm, but the international community has struggled to come up with a coordinated response given Western reluctance to help the Taliban government, which seized power in August.

Taliban officials have asked for help to rebuild Afghanistan's shattered economy and to feed more than 20 million people threatened with hunger.

No nation has yet formally recognized the Taliban government, and diplomats face the delicate task of channeling aid to the stricken Afghan economy without propping up the Taliban.

The Turkish government has adopted a pragmatic approach toward the recent events. Underlining that new realities have emerged in Afghanistan, Ankara said it would move forward accordingly while keeping communication with all relevant actors open. The Taliban say they want international recognition but warn that weakening their government will affect security and spark an even bigger exodus of migrants from the country. Taliban officials previously expressed that they want Turkey to provide aid and support to the Afghan people. Turkey, a NATO member, maintained its embassy in Afghanistan after Western countries withdrew following the Taliban takeover and has urged those countries to step up engagement. At the same time, it said it will only fully work with the Taliban if they form a more inclusive administration.

“Again a migration crisis has unfolded recently in this region,” Çavuşoğlu continued, referring to the Belarus crisis.

At the peak of the crisis last month, thousands of migrants were stranded on the EU's eastern frontiers. The bloc claims Minsk engineered the crisis by granting Belarusian visas in the Middle East, flying migrants in and pushing them across the borders.

“In the crisis with Belarus, we, as Turkey, have supported our allies, primarily Poland,” Çavuşoğlu stressed.

“As a country hosting more than 5 million refugees and a country that is hosting the largest number of refugees in the world since 2014, Turkey is the best country to understand the difficulties that our ally Poland and other countries are witnessing.”

The foreign minister described the situation in the Balkans as “concerning” and stressed that the Balkans’ security is vital for both Turkey and the EU.

Turkey’s top diplomat said that although it remains important to help those hosting migrants, countries must focus on how to solve the issue of migration at its core.