Haftar not after political solution in Libya: Turkish FM 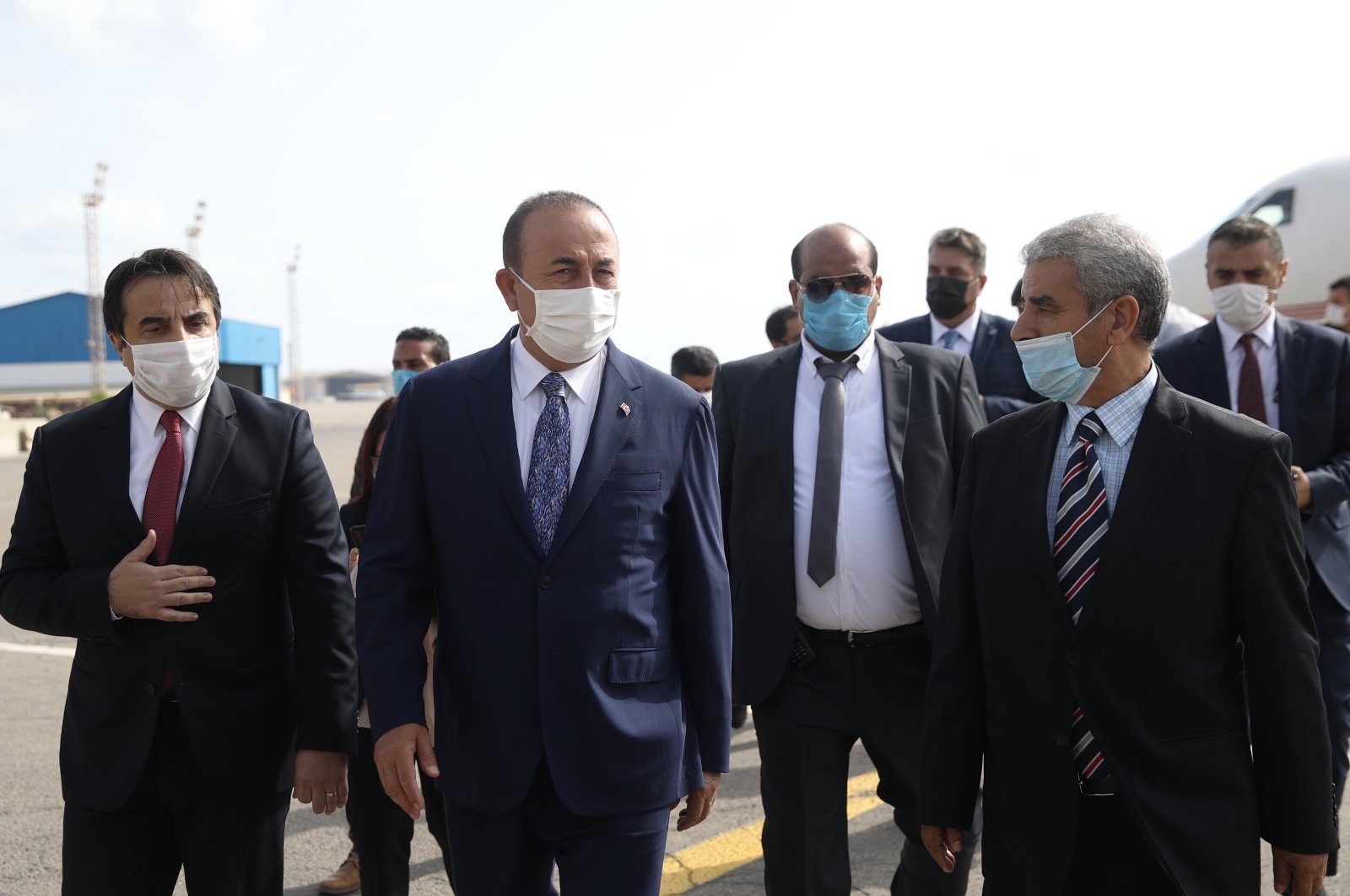 Putschist Gen. Khalifa Haftar is not after a peaceful resolution in Libya, Turkey's Foreign Minister Mevlüt Çavuşoğlu said on Thursday during a visit to Libya along with his Maltese counterpart.

"Haftar does not believe in a political solution in Libya, as proven by his avoidance of diplomatic talks," the foreign minister expressed, referring to the putschist general's past history of leaving peace talks, which took place in Berlin.

This past January, the Berlin conference on Libya, which was supported and facilitated by the United Nations, began a political process for a permanent cease-fire, but the meetings ended without reaching a conclusion in February as Haftar left the table.

“When Haftar was leaving the diplomatic talks, did anyone of his supporters manage to convince him otherwise?” the foreign minister asked. “I believe they did not want to,” he continued.

Since the ouster of late dictator Moammar Gadhafi in 2011, two seats of power have emerged in Libya: one led by Haftar in eastern Libya, supported mainly by Egypt, Russia, France and the United Arab Emirates (UAE), and the other in Tripoli, which enjoys U.N. and international recognition.

Haftar's forces aim to capture the capital, Tripoli, through the backing of Egypt, the UAE, Russian mercenaries and some African troops.

Turkey and Malta, meanwhile, back Prime Minister Fayez Sarraj's internationally recognized Government of National Accord (GNA), forming a cooperative to tackle the problems the country faces, as well as regional issues.

Immediately after landing in the war-torn country, the Turkish and Maltese diplomats held a trilateral meeting with Sarraj. During the meeting, both Malta and Turkey stressed their support to the internationally recognized GNA of Libya. According to a joint statement, both countries underlined that there is no military solution to the Libyan crisis, and the stability and security of Libya are of great significance. The three Delegations also expressed their reservation vis-a-vis Irini Operation and highlighted its shortcomings.

After the meeting, Çavuşoğlu made a series of statements on Libya, underlining Turkey's support for the GNA.

"Diplomatic visits between Turkey, Libya and Malta will continue in upcoming days as a solution to Libyan conflict remains unlikely for now," he said, indicating that the European Union needs to provide more support to the Libyan government.

Referring to Operation IRINI, however, Çavuşoğlu said that Germany sent ships to the Eastern Mediterranean under pressure from France, which make it a partisan mission for Libya and its ally Turkey.

“Germany was the host of the Berlin conference. It needs to be objective,” he said, adding that in his belief, Germany is not very willing to participate in the operation itself if it wasn’t for France’s sake.

On March 31, EU foreign ministers approved the launch of the operation. Through the air and sea and with satellites, IRINI aims to ensure all countries respect the ban on providing arms to parties involved in the Libyan conflict. EU forces are also supposed to watch for illegal oil exports, prevent human trafficking and contribute to the training of the local coast guard and navy as a complementary task.

Germany has been part of the operation since its beginning and has already supplied a surveillance plane that has operated about 20 missions so far.

Tripoli opposes the operation because it believes it falls short of preventing military aid from reaching Haftar's self-proclaimed Libyan National Army (LNA) as it only monitors the sea and that more comprehensive monitoring should be carried out.

Back in June, Çavuşoğlu said that the operation had failed to meet the demands and concerns of the internationally recognized government.

“Does it say anything about the warplanes coming to Libya from Syria? Does it look into arms sent from Abu Dhabi? Does it have a report about France supplying arms to Haftar?” he said. “It’s not objective. Operation IRINI does not contribute to a solution to the Libya problem, nor the embargo,” Çavuşoğlu continued.

Meanwhile, Libya’s High Council of State President Khaled al-Mishri after a meeting with Çavuşoğlu told reporters that at least 110 flights carrying foreign mercenaries and ammunition were made to Libya in support of warlord Haftar. Mishri further indicated that the GNA is closely following the movements of foreign mercenaries in the region. He added that irregular migration, a political solution to the Libyan crisis and trade relations with Turkey were discussed. “The stance of Libya and Turkey in this regard is clear. We support a peaceful political solution. Yet, we are also capable of realizing a military option,” he said.

The visit to Libya came following Çavuşoğlu's visit to Malta on Wednesday.

In the Maltese capital Valletta, Çavuşoğlu addressed bilateral relations and as well as regional and international issues.

Libya in North Africa and the Mediterranean island of Malta are separated by only about 357 kilometers (222 miles).

Later in the day, Çavuşoğlu released a series of Twitter messages about his meeting with Borrell and said: "Our relations should not be taken hostage by some member states. EU should keep its promises on migration. Turkey will continue to defend forever its rights in the Eastern Mediterranean."

He also expressed his pleasure with Malta’s decision to withdraw from EU’s one-sided Operation Irini on Libya, adding that Malta’s cooperation with the legitimate government of Libya should set an example for other EU member states.

The meeting in Libya is not their first trilateral union, as last month representatives from the three countries came together in Ankara and underlined that one of their main priorities is to form stability in Libya and end military support to Haftar.

“It is essential that all types of help and support are given to the putschist Haftar, which prohibits ensuring Libya’s peace, tranquillity, security and territorial integrity, end immediately,” Turkish Defense Minister Hulusi Akar said in the meeting.

Last month, government sources told the Times of Malta that the island’s policy on Libya was now in line with that of Ankara after months of lengthy discussions and diplomatic efforts.

It has been reported that Camilleri confirmed Malta and Turkey are in advanced talks "to develop a collaboration agreement to fight transnational crime."

The agreement is reported to see law enforcement authorities in the two countries collaborate on the prevention and investigation of serious criminal offenses such as terrorism, money laundering and the trafficking of drugs, weapons and migrants. Camilleri said that Turkey now “considers Malta a strategic country in the Mediterranean” in the fight against human smugglers.

The Ankara visit was part of a series of meetings that also focused on a political solution for Libya, based on a cease-fire and national unity.

Migration is one of the major problems that Malta has with Libya as it seeks Tripoli's help to stem illegal migration by having boats suspected of human trafficking be intercepted by the Libyan coast guard before they reach Malta’s search and rescue area.

In 2020 alone, the Libyan coast guard rescued and returned to its shores 6,265 people, the Maltese foreign ministry said last month.