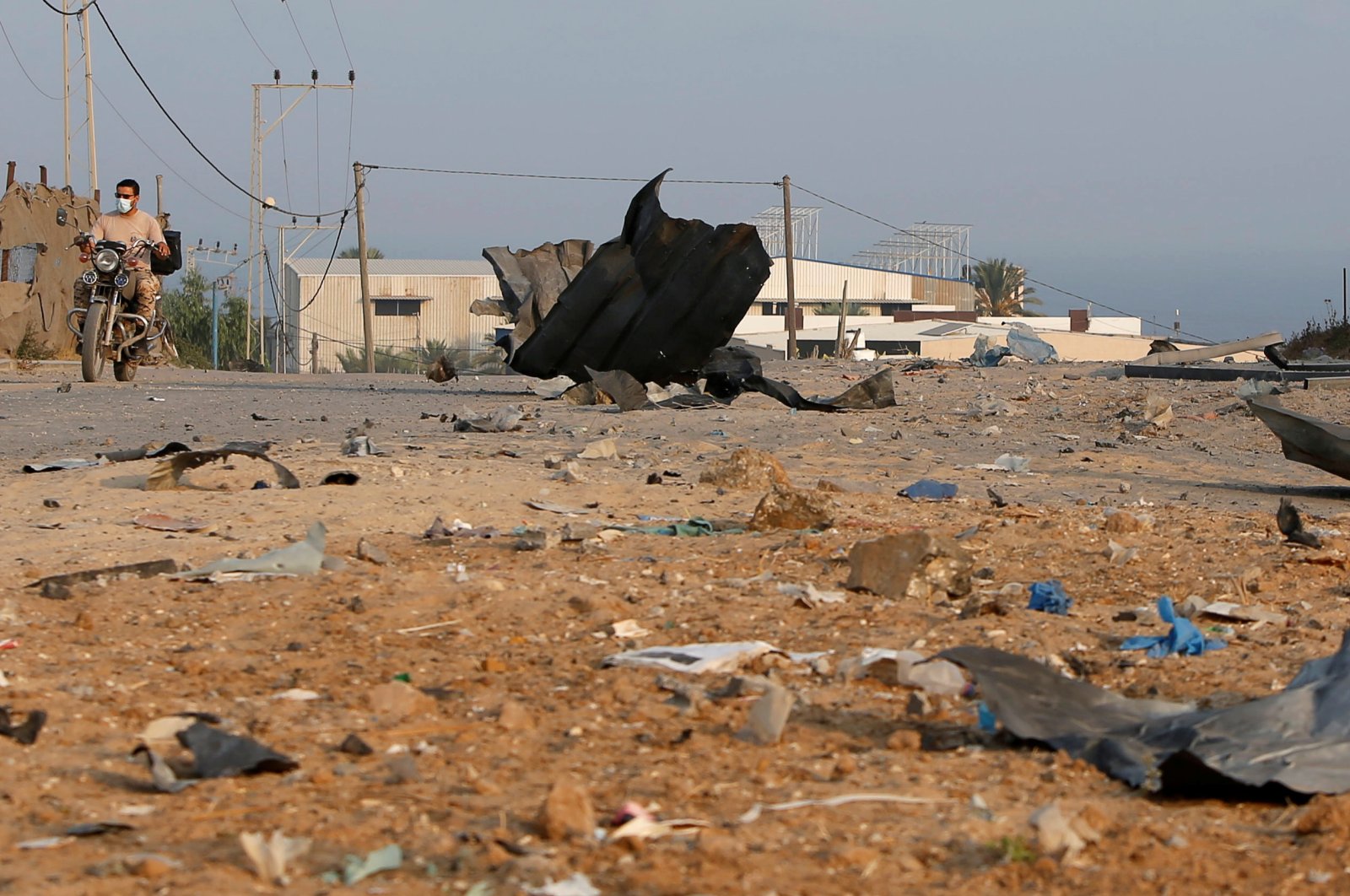 A Palestinian man rides a motorcycle as he passes the scene of an Israeli airstrike on a Hamas target in the northern Gaza Strip, Palestine, Sept. 16, 2020. (Reuters Photo)
by DAILY SABAH WITH AGENCIES Sep 22, 2020 2:31 pm
RECOMMENDED

Representatives from rival Palestinian groups Hamas and Fatah are set to meet in Turkey Tuesday for talks based on accelerating inter-Palestinian reconciliation.

Senior Hamas official Khalil Al-Hayya said Tuesday's talks aimed at implementing the outcomes of an earlier meeting between the general secretaries of the two rival factions that took place in Ramallah and Beirut earlier this month.

"Hamas is keen on achieving national unity in the hope of reaching a comprehensive national strategy to face the challenges and plots that target the Palestinian cause," he said in a statement.

During a meeting on Sept. 3, Hamas and the Palestinian Authority (PA) – in which Fatah holds sway – agreed on a host of issues, including healing their rift and upholding the principle of a peaceful transfer of power through elections based on proportional representation.

The spokesperson for Fatah, Mounir Al-Jaghoub, earlier tweeted that his group's delegation will meet with Hamas representatives to discuss ending the Palestinian division and the application of outcomes of the Sept. 3 meeting.

On Monday, Palestinian President Mahmoud Abbas held a phone call with President Recep Tayyip Erdoğan in which he asked for the latter's help in ongoing talks to heal the inter-Palestinian rift, according to the official Wafa news agency.

The PA and Hamas agreed to form a joint leadership group called the "Unified National Leadership for Popular Resistance," comprised of all factions, to ensure a "comprehensive popular resistance" against the Israeli occupation.

The Palestinian state maintains the validity of the so-called "Arab consensus" and rejects the notion that it has been isolated due to recent developments. The consensus has long held that Arab states will only normalize ties if Israel meets a number of conditions to ensure Palestinian rights.

One demand is for Israel to withdraw from the territories it occupied in the Six-Day War of 1967. Another is to agree to a Palestinian state with east Jerusalem as its capital, while the third is to find a just solution for the millions of Palestinian refugees and their descendants.

Hamas and the PA have been undergoing a process of reconciliation over the last four years.

According to the unification deal, Hamas is to hand over control of Gaza to the authority, accepting the establishment of a unified government under the leadership of Fatah.

In return, the PA agreed to lift the sanctions and, by doing so, ease the living conditions in the densely populated city.

In 2018, Hamas accepted the formation of a national unity government under the supervision of Egypt. According to the deal, state officials in Gaza would be paid by the PA. It was known that Hamas had failed to make such payments due to the lack of financial resources.

In the last days of 2016, the two parties held meetings in Moscow, at first failing to reach a consensus. Increasing international and internal pressure on Hamas has forced the party to take the initiative, however, resulting in the change of its manifesto and main cadre.

Hamas declared a new program in May 2017 in the Qatari capital of Doha, separating itself from the Muslim Brotherhood, distancing itself from previous vows to destroy Israel and accepting the 1967 borders of the Palestinian state without referring to Israel's legitimate statehood.