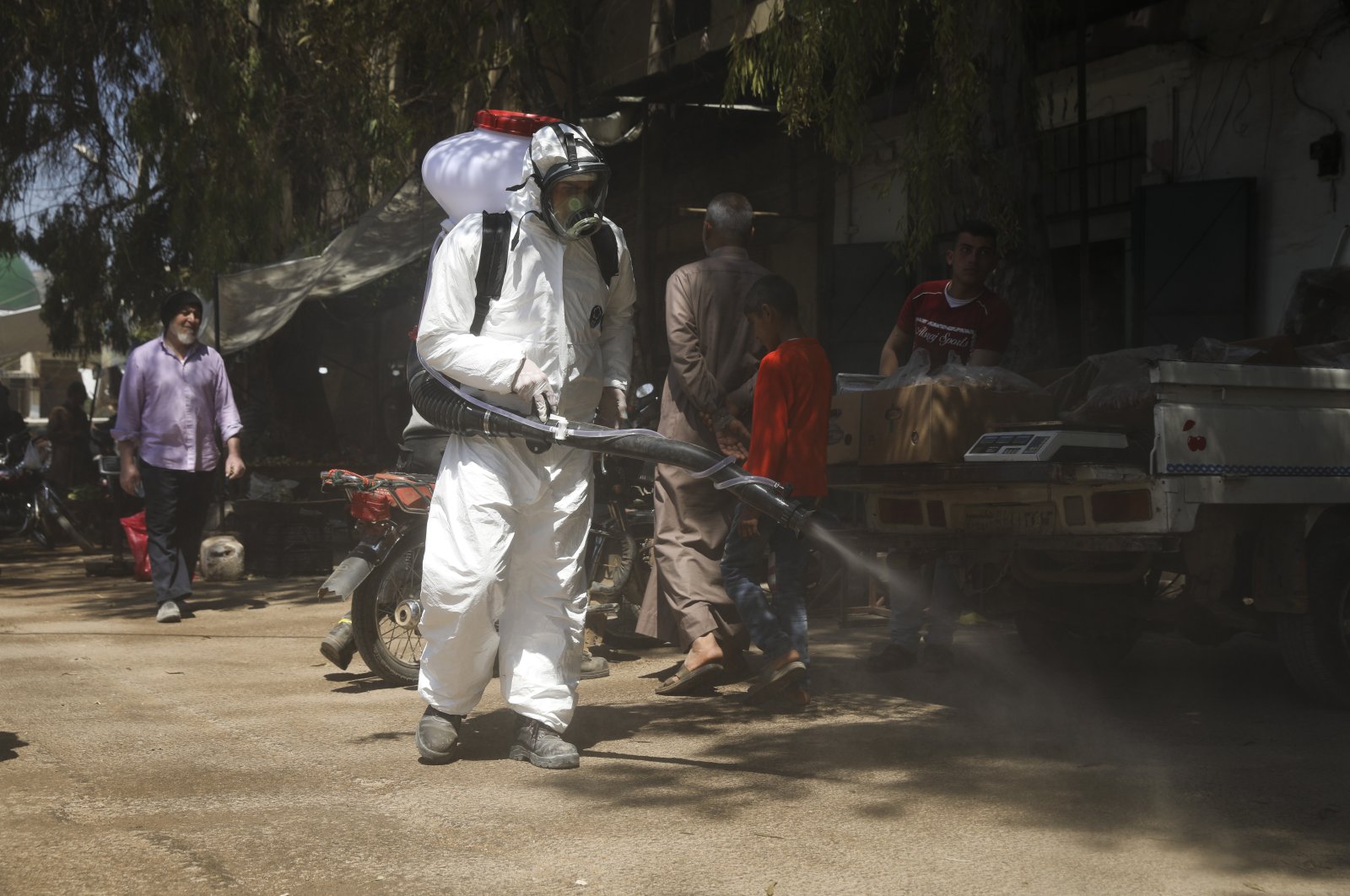 A member of a nongovernmental aid organization sprays disinfectant as a preventative measure against the coronavirus in the town of Armanaz, Idlib province, Syria, April 14, 2020. (AP Photo)
by Nur Özkan Erbay Apr 17, 2020 2:45 pm
Edited By Nur Özkan Erbay
RECOMMENDED

Besides being the epicenter of the humanitarian crisis in Syria, Idlib is now facing another phase of the crisis as the dysfunctional international system has been unable to meet the needs of millions of displaced people in the city amid the coronavirus pandemic.

Speaking to Daily Sabah, Hadi Albahra, the co-chair of the Syrian Constitutional Committee and former president of the Syrian National Coalition, said that even though Idlib has been hosting the highest number of Internally Displaced Person (IDP) in Syria, the United Nations and World Health Organization (WHO) have failed to provide sufficient amounts of aid to the city.

“There are no justifications for the WHO to do that whatsoever. The U.N. reports state that densely populated sites and areas experiencing hostilities such as Idlib remain primary areas of concern for COVID-19 infection,” Albahra said. He also posted his message on Twitter on Thursday mentioning U.N. Secretary-General Antonio Guterres, the U.N. Special Envoy for Syria Staffan De Mistura and the U.S. Embassy in Syria.

Emphasizing the fact that Idlib has been hosting the highest number of IDPs, resulting in a 3-to-1 ratio of IDPs to host community members across the region, Albahra stated that WHO only delivered 5,300 COVID-19 test kits to the whole northwestern Syrian region.

Albahra also noted that international organizations and countries deliver all of the medical supplies – such as incubators, ventilators and other urgently needed supplies – either to the Assad regime or to the northeastern part of the country.

Meanwhile, WHO has received reports of dozens of confirmed cases and two deaths in Syria due to COVID-19 as of April 10. The organization noted that a further spread of the virus could create a disaster for a country already devastated by 10 years of war, particularly for IDPs. Yet, dangerously cramped conditions in multiple IDP camps, settlements and places of detention increase the risk of infection.

Rami Abdulrahman, the founder and director of the Britain-based Syrian Observatory for Human Rights, also told Daily Sabah on April 9 that the current situation in northwestern Syria is dire on all fronts.

Underlining that the areas under the control of opposition factions are suffering from severe shortages in medical equipment, services and medical crews, he said these problems have hindered any efforts to stop the spread of the coronavirus.

While the violence and clashes in the Idlib region have been de-escalating since a cease-fire brokered by Turkey and Russia took effect last month, civilians in the region now face the fresh risk of a new humanitarian crisis due to the coronavirus pandemic.

As the pandemic spreads to nearly all parts of the world, the danger is extremely high in conflict-ravaged countries like Syria where living conditions and health care systems seriously suffer. Following the cease-fire, Syria witnessed the lowest monthly civilian death toll in March during its nine-year-long civil war. However, hope has given way to despair in a short period of time as the pandemic continues to threaten the country, dragging it into a further humanitarian catastrophe.

Najat Rochdi, a senior humanitarian adviser to the U.N.'s top Syria envoy, said April 1 that the current situation in the war-wrecked country is new and unlike any the team has dealt with over the last nine years due to the encroaching coronavirus outbreak.

"Humanitarian assistance has never been more critical for the entire country. All Syrians, and all those who provide assistance, are at risk," he said during the meeting of the International Syria Support Group Humanitarian Task Force.

According to the latest reports, some of the displaced civilians have been able to return to their homes depending on where their villages are located. But the majority of people, who were displaced from the residential areas along the M5 highway and in rural western Aleppo, are not able to return because these areas are under the control of the Bashar Assad regime. There are still tens of thousands of people who are not able to return to their homes and live in all kinds of inhumane conditions.

Meanwhile, as many authorities and local people have mentioned, most of the COVID-19 medical aids are being sent to the northeastern region of Syria.

For example, the U.S.-led coalition against the Daesh terror group provided $1.2 million in supplies for COVID-19 prevention efforts to the YPG/PKK terrorist organization-dominated region earlier this month. The equipment was sent to the al-Hasakah and al-Shaddadi areas in northern Syria controlled by the YPG/PKK terrorist group, according to the Combined Joint Task Force-Operation Inherent Resolve. Personal protective equipment such as latex gloves and masks, as well as surgical kits, defibrillators and oximeters were provided to the region. Additionally, protective equipment for guard forces, including masks, shields and batons, was sent to detention facilities.

As nearly 2 million people have had to flee their homes to relatively safer northern areas near the Turkish border due to attacks by the Russia-backed Assad regime in Idlib, those who are living in tent camps are probably in the worst condition among the displaced population. Turkey's military backs some Syrian opposition groups in the northwestern Idlib region where it ramped up its deployments earlier this year. Fighting has subsided over the past month since Ankara agreed on a cease-fire with Moscow.

Since April 2018, attacks on the last opposition stronghold intensified, causing more than a million people to move toward the Turkish border, putting Turkey, which already hosts 3.7 million Syrian refugees, in a difficult position.

According to the U.N., 6 million internally displaced Syrians, including 1 million displaced in northwest Syria since Dec. 1, and 1.8 million in Damascus and rural Damascus, live in conditions that make them particularly vulnerable to respiratory infections.

Speaking at a virtual conference by the Atlantic Council in Turkey and the Turkish Heritage Organization on Tuesday, Foreign Minister Mevlüt Çavuşoğlu underlined that Turkey is the main source of aid and the pandemic is making efforts "more difficult" in Syria.

Çavuşoğlu especially highlighted Idlib province. Saying that Idlib desperately needs foreign assistance and a solid global plan, which currently does not exist, Çavuşoğlu added, "We need actually concrete and timely and unconditional support from our allies.”

The minister criticized the U.N. Security Council for being late in responding to the pandemic that has infected at least 2 million people worldwide and has claimed the lives of thousands.

"Everybody agrees that the Security Council has been late to respond to COVID-19. They met to discuss the pandemic almost four months after the outbreak," the top diplomat said. "This is unbelievable, outrageous.”

Meanwhile, Turkey has rolled-up its sleeves to inform Syrians living in Turkish-backed Syrian opposition-controlled areas about the new coronavirus outbreak and raise awareness among locals on ways to protect themselves from spreading the virus in the war-torn country. Units working under the Turkish Health Ministry have started distributing informational brochures door-to-door in areas previously cleared of terrorists by the Turkish Armed Forces (TSK).

The brochures, prepared by the Turkish Presidency’s Communications Directorate, are written in Arabic and explain the ways to protect oneself from the coronavirus. The brochures are distributed in the Operation Olive Branch, Operation Euphrates Shield and Operation Peace Spring areas.