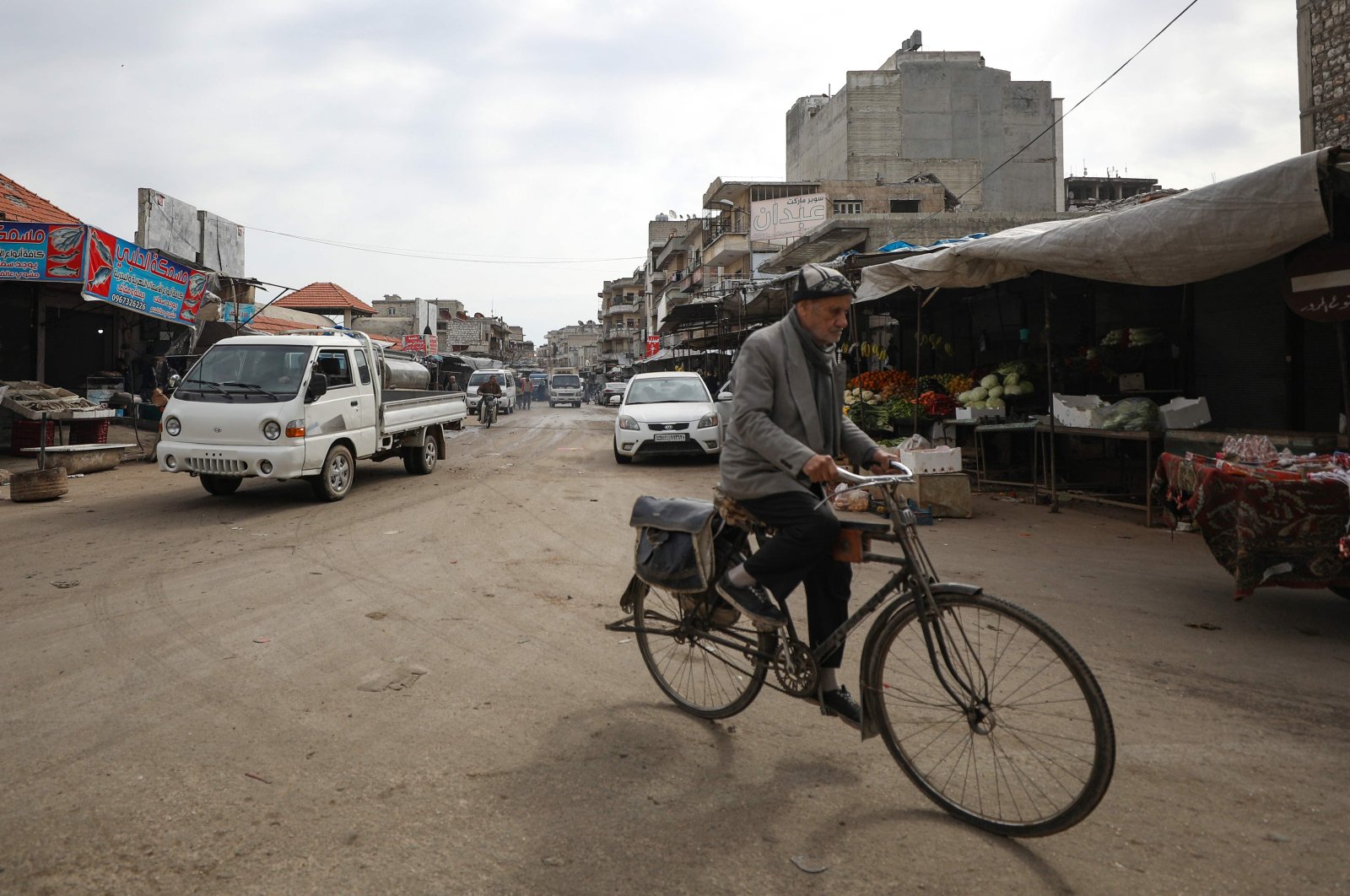 A man rides his bicycle in a street of the northwestern Syrian city of Idlib on March 6, 2020. - Syria's war-ravaged northwest woke up to relative calm today, its skies free of warplanes for the first day in months, following a Russian-Turkish ceasefire deal. (AFP Photo)
by Daily Sabah with Agencies Mar 06, 2020 12:45 pm
RECOMMENDED

International actors welcomed the cease-fire deal between Turkey and Russia to end hostilities and prevent a further humanitarian crisis in northern Syria’s Idlib, praising efforts to bring peace and stability to the region.

"The Secretary-General hopes that this agreement will lead to an immediate and lasting cessation of hostilities that ensures the protection of civilians in northwest Syria, who have already endured enormous suffering," said Stephane Dujarric in a statement.

Referring to an endorsed roadmap for a peace process in Syria, the U.N. chief also called for a return to the U.N.-facilitated political process mandated by Security Council Resolution 2254 (2015).

The statement came hours after Ankara and Moscow agreed to a cease-fire effective as of midnight Thursday amid recent clashes between the Turkish military and Syrian regime forces that left many dead on both sides.

As part of the agreement, all military activities will end in Idlib and a security corridor will be established 6 kilometers (3.7 miles) deep to the north and to the south of the M4 highway.

The EU on Friday also welcomed the deal in Syria as a sign of goodwill but urged the warring parties to allow in more humanitarian aid.

Foreign ministers from the 27 EU states are meeting for talks in Zagreb on the crisis in Syria's northwestern Idlib province, where Ankara was battling Moscow-backed regime forces.

"For sure I am pleased about the cease-fire, the cease-fire is good news. At least it's goodwill – let's see how it works," the bloc’s diplomatic chief Josep Borrell said as he arrived for talks.

Nearly a million civilians have fled their homes due to the fighting in Idlib, with the U.N. describing it as the worst humanitarian emergency since the start of the Syrian civil war in 2011.

"It is important now to concentrate on humanitarian aid and I would welcome if Russia would respect the concept of humanitarian aid corridors to be widened," Estonian Foreign Minister Urmas Reinsalu said.

Ireland's Simon Coveney said there was "relief" among EU countries at the news of the cease-fire.

"But there's still an extraordinary humanitarian challenge that I think we all face in terms of the sheer numbers of refugees that had been displaced because of the conflict there," Coveney added.

Some EU countries, notably the Netherlands, have called for a no-fly zone over Idlib to stop the regime bombing civilian targets.

"EU countries are willing to provide humanitarian aid to Idlib. The challenge is to get aid into the area and that's where the cease-fire might help. A no-fly zone might help even more," Dutch Foreign Minister Stef Blok said.

But the EU has no power to implement or enforce such a measure and officials are privately skeptical.

"We all know this would need U.N. mandate, would you get that?" a senior EU official said, alluding to Russia's right of veto at the U.N. Security Council.

"A no-fly zone always sounds nice but needs to be militarily enforced. Who would do that?"

Intense fighting has killed dozens of Turkish soldiers in Idlib in recent weeks, as Ankara launched a direct offensive against Bashar Assad's forces for the first time.

As well as the Idlib crisis, the foreign ministers are expected to discuss how best to handle the increasingly tense exchanges and dramatic scenes on the Turkish-Greek border.

In another statement, the U.S. State Department said that the agreement between Turkey and Russia Thursday for a cease-fire in Idlib will prevent a humanitarian crisis and reduce the danger in the region.

"We support the Turkey-Russia agreement for a cease-fire in Idlib, which we hope will eliminate a very dangerous situation and alleviate the terrible humanitarian crisis that was caused by the attacks of Assad’s regime, Russia, Iran and Hezbollah forces,” it said.

The U.S. stated that all sides in the conflict must adhere to this agreement. It emphasized the importance of the Bashar Assad regime and his allies to abide by the treaties they signed.