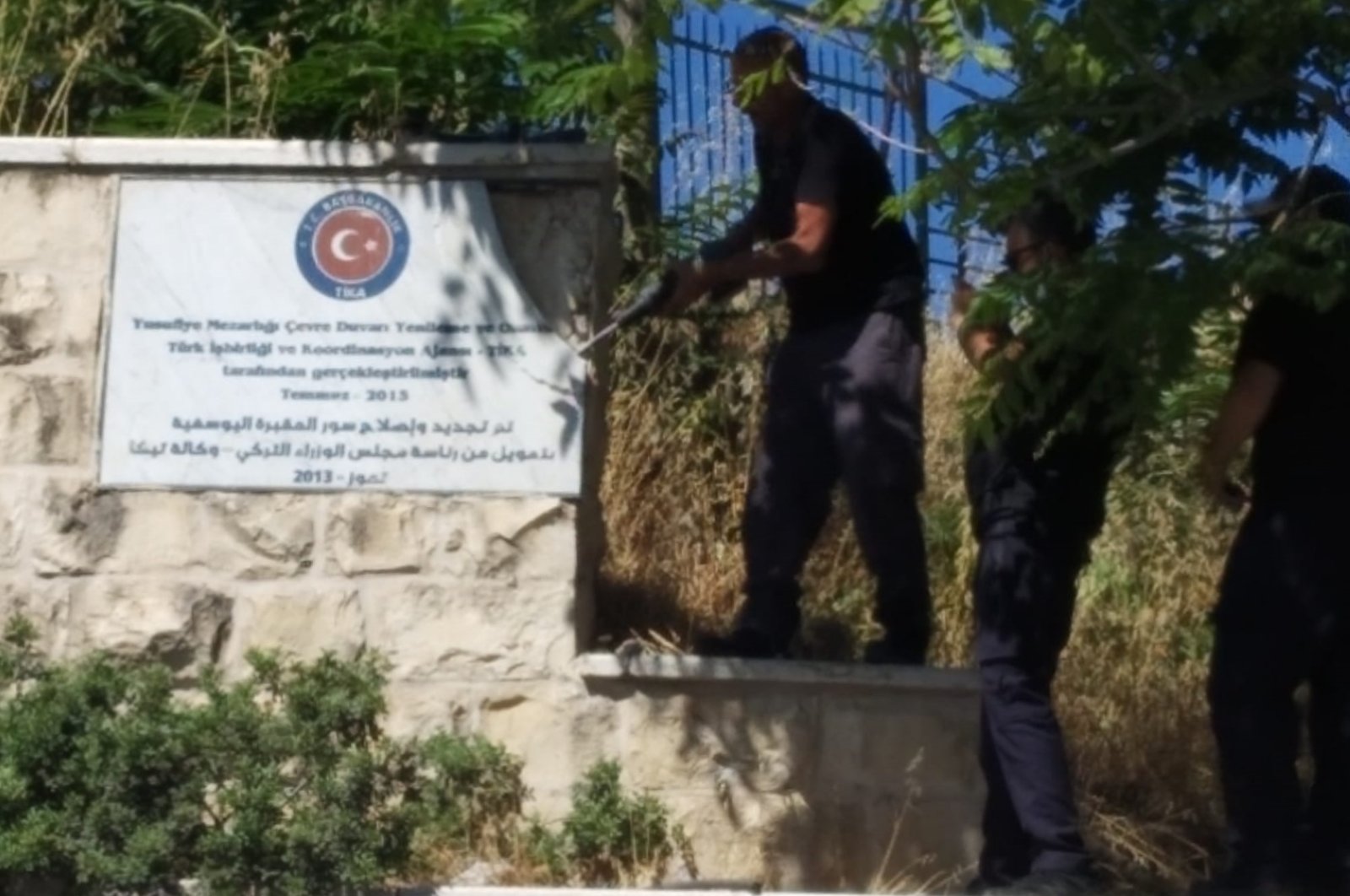 Israeli authorities on Wednesday destroyed a plaque with a Turkish flag on it in Jerusalem.

The plaque was placed on Yusufiye Cemetery, which belongs to the Muslims, by Turkey's Turkish Cooperation and Coordination Agency (TIKA) after a restoration project at a cemetery in east Jerusalem to mark Turkey's contribution to the site.

Following the incident, Deputy Foreign Minister Yavuz Selim Kıran released a statement, saying that it is a disrespect to historical and cultural heritage.

"International Community should react to this insolence for historical & cultural heritage," Kıran said, sharing the footage of the move on his Twitter account.

"You can remove plaques, but you’ll never be able to remove love for #Turkey from the hearts of the Ummah," he added.

The plaque had been on the cemetery's wall since 2010, though the construction of the cemetery was completed in 2008.

Speaking to Anadolu Agency (AA), the spokesperson for the Israeli police force, Micky Rosenfeld, said the decision to remove the plaque was made Tuesday by the Jerusalem Municipality.

The municipality, on the other hand, claimed in a written statement to AA that the plaque was hung without permission, and that's why it was removed.

The responsibility of all Islamic buildings and construction in east Jerusalem, including cemeteries, belongs to the Jerusalem Islamic Waqf. The coordination with the Israeli authorities over any work in such places is being formed through this waqf.

The Palestine coordinator of the TIKA, Ahmet Refik Çetinkaya, stated upon the removal of the plaque that the move was a result of an attempt to defame Turkey and Turkish institutions in Israel.

Underlining that all the work of the TIKA in the region is being held within the knowledge of Palestinian and Israeli authorities, Çetinkaya expressed that Turkey would not accept the unlawful intervention of its peaceful attempts in the region.

Çetinkaya also highlighted that the restoration of the cemetery was crucial to protect the cultural heritage of Jerusalem, and they have taken all the necessary measures to prevent the occurrence of such incidents in the future.

Mustafa Abu Zahra, head of the Committee for the Preservation of Islamic Cemeteries in Jerusalem, also emphasized that the removed plaques actually represented the gratitude of Jerusalem's people to Turkey for its work in the city.

"We reject what has happened. Israel cannot remove the traces of what Turkey has accomplished in Jerusalem so far," Abu Zahra said, adding that all the work of the TIKA was allowed by the authorities.

Relations between Turkey and Israel drastically declined in 2010 after 10 activists were killed following an Israeli naval raid on a Turkish aid ship, the Mavi Marmara, en route to deliver humanitarian aid to the blockaded Gaza Strip.

The event caused an unprecedented crisis after decades of peaceful Turkish-Israeli relations. Both countries even recalled their diplomatic envoys following the massacre.

Consequently, the number of Israelis spending their vacations in Turkey followed the spiraling political trend. In 2010, 109,000 Israelis visited Turkey. In 2012 and 2013, the Israeli arrivals further dropped and amounted to less than 100,000 per year.

In 2013, with Israeli Prime Minister Benyamin Netanyahu's apology to Turkey and the payment of $20 million in compensation to the Mavi Marmara victims, Turkish-Israeli relations entered a period of normalization.

In December 2016, both countries reappointed ambassadors as part of the reconciliation deal and reiterated several times the necessity of further improving bilateral relations.

Despite the improvement of the ties, Turkish officials continue to criticize Israel’s policies targeting Palestinians, including illegal settlements in the West Bank and Jerusalem and the humanitarian situation in Gaza.

Turkish citizens have also complained about Israel’s arbitrary restrictions on visits. Israel's informal policy of deportation, visa rejection and arbitrary detention of Turkish nationals, as well as the practice of keeping them waiting for no reason at airports, have failed to discourage hundreds of Turks from visiting each year.

In January, Turkey expressed outrage over a unilateral so-called peace plan by the U.S. for the Israeli-Palestinian conflict as authorities pointed to Jerusalem as a "red line" for the country. The Turkish public, meanwhile, flocked to the streets to protest in both Washington and Tel Aviv over their "betrayal" of the Palestinians.

Being one of the main countries that have maintained a clear position on the Palestinian cause, Turkey responded to the so-called "Deal of the Century" by U.S. President Donald Trump by stating that the people and land of Palestine were not for sale.

The deal followed Trump's decision in December 2017 to recognize Jerusalem as the capital of Israel, an issue which was carried to the U.N. General Assembly after a draft resolution on the matter was vetoed 14-1 by the U.S. in the U.N. Security Council.