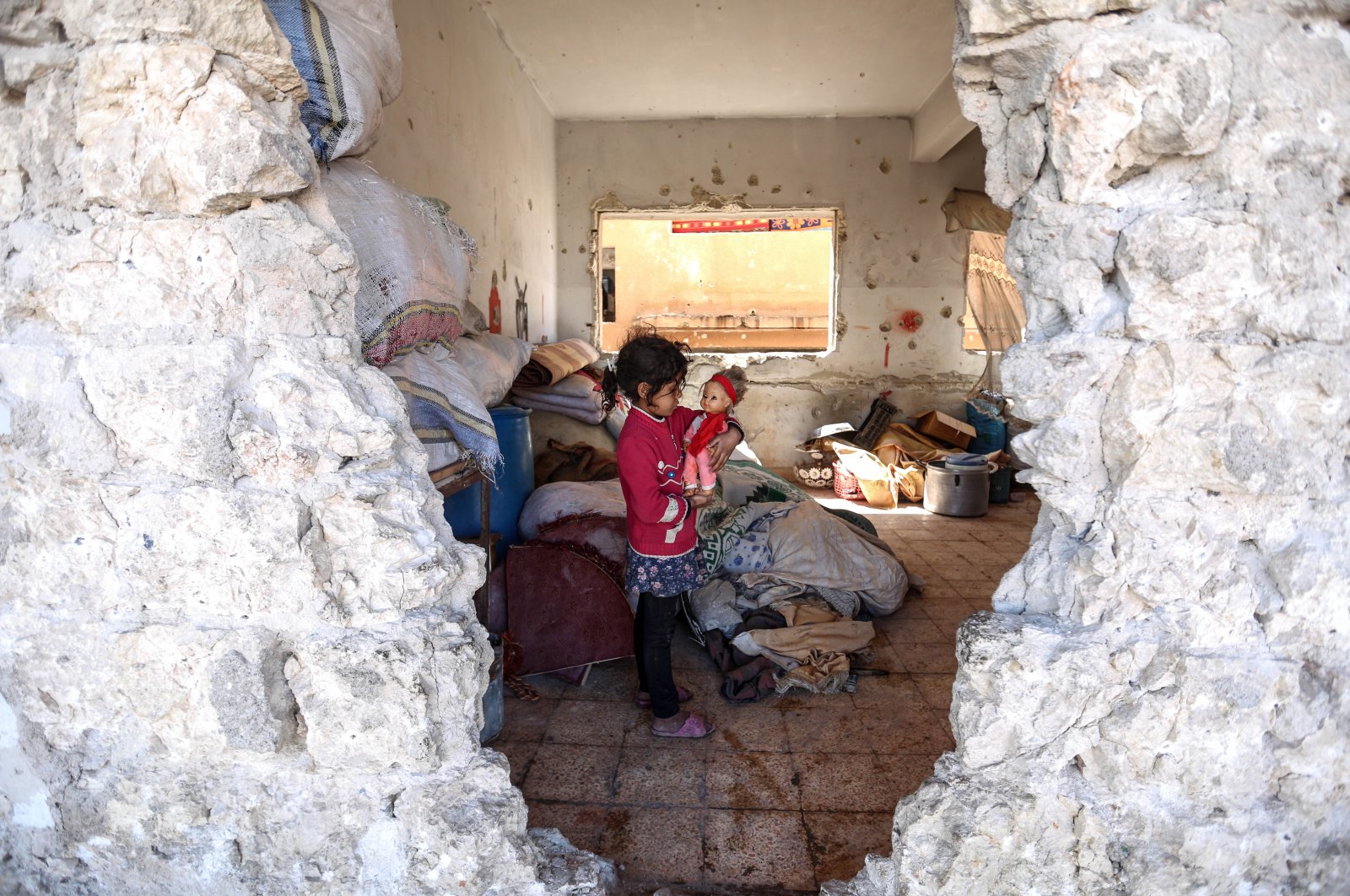 A Syrian girl sits in a school building damaged by the airstrikes of the Assad regime and Russia in Idlib province, April 17, 2020 (AA Photo)
by Dilara Aslan Apr 20, 2020 11:31 am
Edited By Nur Özkan Erbay

As doubts regarding the longevity of the fragile truce in Syria's northwest persist, it became once again obvious that it was mainly the Assad regime causing the deaths of hundreds of innocent people, destroying everything in its way

The lowest monthly civilian death toll was registered during the cease-fire period in March since the civil war in the country erupted in 2011, strongly signaling that the main cause of civilian deaths was the Bashar Assad regime and its backers, which are now required to conform to the truce.

Two war monitors, the Britain-based Syrian Observatory and the Syrian Network for Human Rights (SNHR), recorded just around 100 civilian deaths in March. The civilian death toll was more than double that of March in February when a regime offensive on Syria's last major opposition bastion was still in full swing.

“Certainly, the fact that there are no recorded high casualties following the cease-fire is the biggest evidence that the regime is the primary one responsible for killing civilians and targeting hospitals, schools and medical facilities in the Syrian north,” Raed Al Saleh, director of Syrian civil defense group White Helmets told Daily Sabah in an exclusive interview.

“Over the past nine years, the Syrian regime and its allies have killed and forcibly displaced Syrians, and they used all types of weapons against them, including chemical, cluster and traditional weapons,” Saleh added.

The fragile cease-fire in place in the northwestern Idlib province was put into effect after the Assad regime launched a violent offensive against the region, which is the last opposition stronghold not under regime control and constitutes economic significance due to the key highways that cross it. The attacks that started in December and resulted in nearly the daily reporting of civilian casualties while also displacing the highest number of people at one time since 2011, continued for months with the aid of Russian warplanes, making the life of the residents of Idlib a nightmare and destroying all kinds of civilian infrastructure, including schools, hospitals and other facilities. According to U.N. figures, the latest offensive of the Assad regime and its backers has caused at least 1 million people to flee, most of whom sought refuge in safer areas near the Turkish border.

After heightened tensions, Russia and Turkey last month reached an agreement to halt violence and the flow of displacement. In Syria's northwest, some 3 million people are trapped in a shrinking opposition stronghold battered by months of bombardment, especially in Idlib. Hundreds of thousands of people in overcrowded settlements are teeming with fresh arrivals, and many of the displaced are forced to sleep in freezing temperatures in open spaces.

The camps in northwest Syria are densely populated, and there is insufficient relief reaching them, while the health and education sectors struggle to provide the required services. Even though nongovernmental organizations, the United Nations and Turkish institutions and relief organizations are doing their best to meet the needs of the many civilians in the war-torn country, in the face of the new coronavirus threat, aid is insufficient.

The White Helmets have been rolling up their sleeves to aid the Syrian people that are vulnerable to the coronavirus pandemic that has been spreading around the world. In a place where almost 50% of health infrastructure was destroyed by fighting and attacks of the regime, the task of combating the virus seems nearly impossible. The civil defense group has been disinfecting hundreds of overcrowded tent camps where displaced Syrians live while also raising awareness on how to take measures against the new enemy that is adding up to the suffering of the people.

“The situation of civilians should be improved and their return to their homes should be facilitated, especially that most of the camps where they live lack minimum services,” Saleh highlighted.

“Turkish organizations have a significant role in supporting and helping civilians which cannot be ignored. Their role is obvious and a pioneering one at the level or humanitarian organizations working in the Syrian north,” Saleh pointed out, adding that there is large-scale cooperation with the Turkish Red Crescent (Kızılay), the Humanitarian Relief Foundation (IHH), Turkey's Disaster and Emergency Management Authority (AFAD) and the Turkish Ministry of Health regarding the disinfection campaign that the White Helmets launched in northern Syrian as a preventive measure against the coronavirus.

According to the latest numbers retrieved from the U.N., the number of internally displaced people (IDPs) from northwestern Syria is 2,866,471 out of the total regional population of 4,291,884.