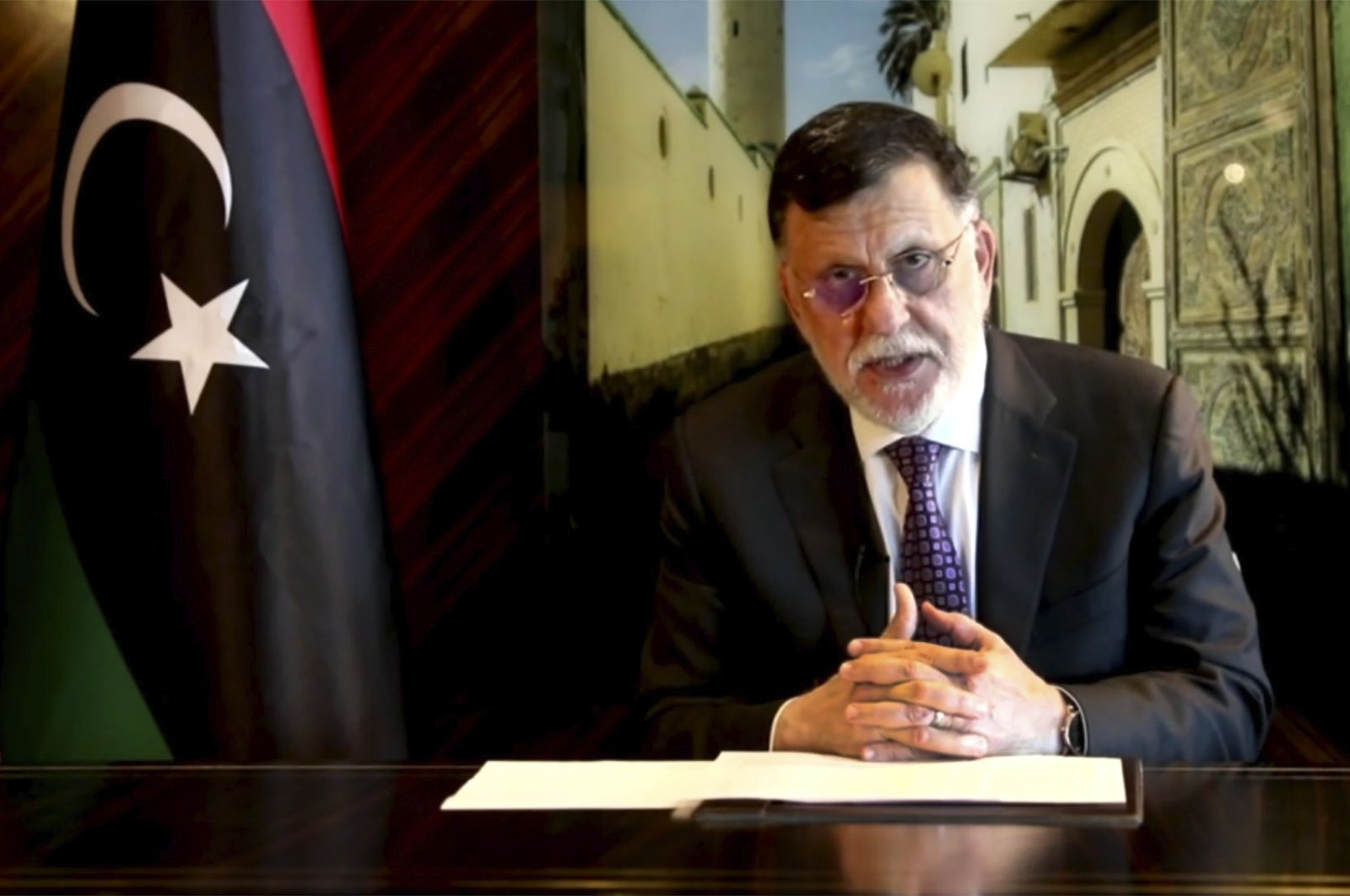 Libya's Prime Minister Fayez Serraj speaks in a pre-recorded message which was played during the 75th session of the United Nations General Assembly, Sept. 24, 2020. (AP Photo)
by DAILY SABAH WITH AGENCIES Sep 25, 2020 10:31 am
RECOMMENDED

Libya's prime minister on Thursday called on putschist Gen. Khalifa Haftar's supporters in the United Nations Security Council to reconsider their positions on the conflict in the North African country.

Speaking at the 75th session of the U.N. General Assembly via video link, Fayez Sarraj urged those countries to work with the legitimate, internationally recognized Government of National Accord (GNA). Sarraj also called on the U.N. to investigate violations by Haftar militias in Libya's Sirte province.

For the cease-fire declared in August to be effective and permanent, the Sirte and Jufra regions under Haftar's control must be demilitarized and foreign mercenaries must leave the country, Sarraj underlined.

The Tripoli-based government and a self-declared parliament in the eastern city of Tobruk linked to Haftar agreed last month on a cease-fire and elections by March. However, the Libyan Army has since reported several breaches of the cease-fire by Haftar's militias.

After recent talks between the two sides in Morocco, Sarraj said he was willing to step down by the end of October as a new government comes together.

Sarraj also called for U.N. support in holding presidential and parliamentary elections as the war-torn country remains split between the rival administrations in the east and west, each backed by armed groups and foreign governments. The U.N. has recognized Sarraj's government as the country's legitimate authority since 2015, but efforts for a long-term political settlement have failed due to the military offensive by forces loyal to Haftar.

Sarraj slammed Haftar’s attempted offensive on the capital, Tripoli, last year, calling it a “tyrannical attack” that attempted to return the country to a dictatorship.

Sarraj said elections next year could lead to democracy and end Libya’s "legitimacy crisis." While he called for political dialogue with all factions and regions of Libya, he said the exception would be those who have "spilled Libyan blood."

"Libyans have waited too long for these elections, which will end the legitimacy crisis," he said.

Sarraj also said that his government has always called for peace and added that the GNA "cooperated a lot with the United Nations and had always proven that it was an advocate of peace and responded to the outcomes and decisions of the Berlin conference."

At the Berlin conference in January, world powers agreed to a peace process for the war-torn country that has largely fallen flat.

While Sarraj urged armed militias to lay down their weapons, warning that they were risking a fragile cease-fire in the war-battered nation, he also welcomed commitments by political leaders in eastern Libya to stop violence and resume oil production.

"However, we have not yet seen cooperation from armed groups and the aggressive militias. In fact, we have only seen hostile remarks from their spokesmen and violations by their forces," he said.

"Therefore, we would hold them responsible for any military confrontations and any resulting casualties and destruction,” he added.

The GNA, which enjoys the backing of Turkey and Qatar, earlier this year repelled the deadly offensive on Tripoli by Haftar. Haftar has enjoyed support from France, Egypt, Saudi Arabia, the United Arab Emirates (UAE) and Russia, which according to U.S. officials has sent in mercenaries and a flood of weapons.