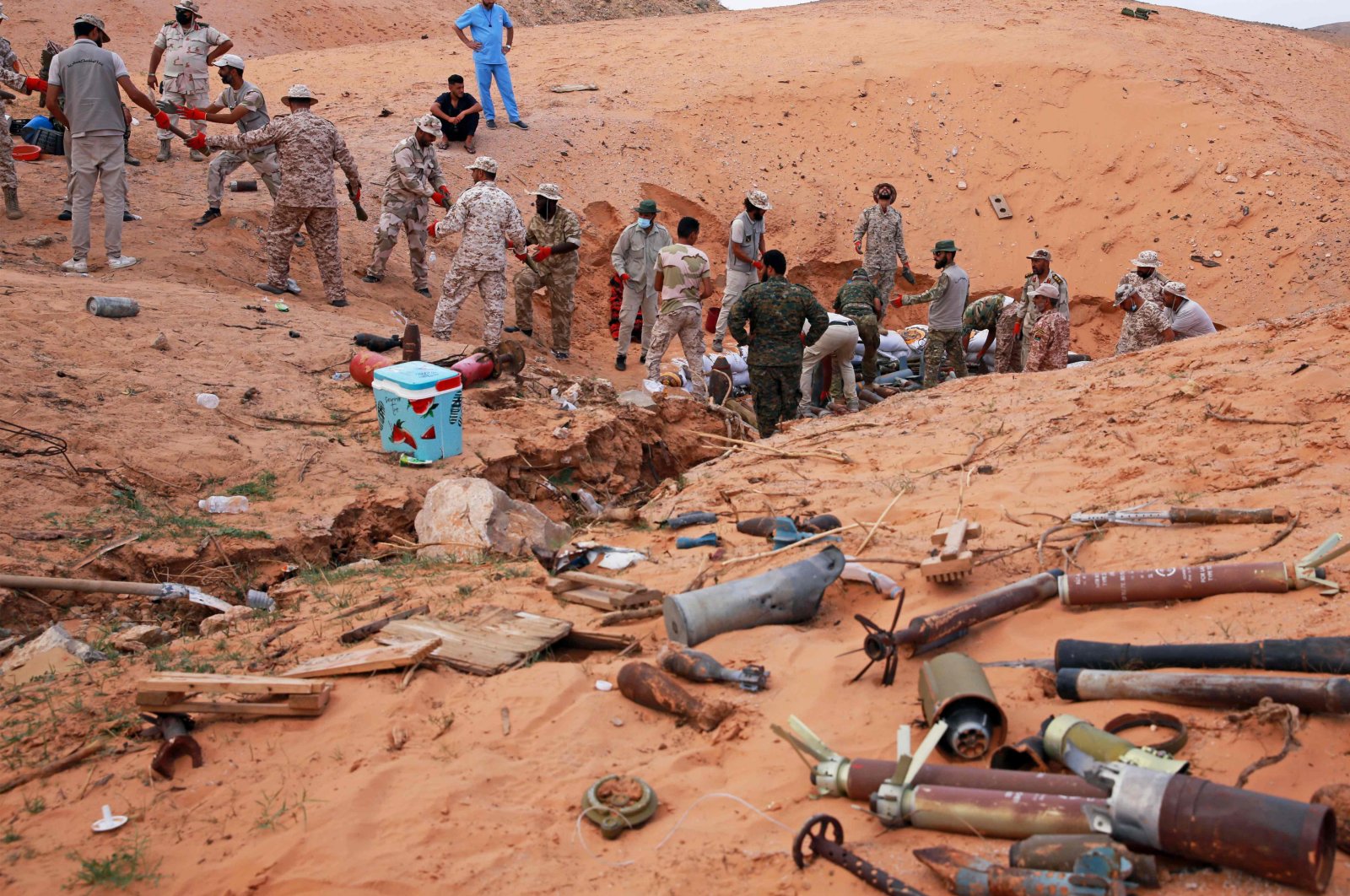 Military engineers of the U.N.-recognized Libyan Government of National Accord (GNA) prepare to dispose of ammunition and explosives in the Libyan capital Tripoli, Oct. 12, 2020. (AFP Photo)
by DAILY SABAH WITH AA Oct 16, 2020 10:27 am
RECOMMENDED

Delegations from the Libyan High Council of State and the Tobruk-based House of Representatives agreed to end a "transitional period" and initiate a "permanent phase," United Nations Support Mission in Libya (UNSMIL) announced Thursday.

The two sides, which met Oct. 11-13 in Cairo to discuss constitutional arrangements, also agreed to maintain talks to reach a permanent solution to the ongoing crisis, UNSMIL said on Twitter.

The mission said it hopes the decision will "facilitate the discussions on constitutional arrangements during the Libyan Political Dialogue Forum and contribute to paving the way toward a political settlement."

UNSMIL announced Oct. 10 that Tunisia will host the Libyan Political Dialogue Forum, which will bring together political parties to the Libyan crisis at the beginning of November.

Libya’s internationally recognized Government of National Accord (GNA) announced a truce on Aug. 21 and ordered the military to stop operations against putschist Gen. Khalifa Haftar's militias.

The army has since reported several breaches of the cease-fire by the militias.

Most recently, Haftar forces on Thursday launched four Grad missiles on Libyan Army units based west of Sirte province in a renewed violation of the cease-fire.

Abdulhadi Dirah, the spokesperson for the army's Sirte-Jufra Joint Operations Unit, said in a statement to the press that Haftar forces launched attacks on the Libyan Army but no one was injured or killed.

Diplomatic efforts have been underway in recent weeks to resolve the conflict following victories by the army against the militias.

The GNA was founded in 2015 under a U.N.-led agreement but efforts for a long-term political settlement have failed due to a military offensive by forces loyal to Haftar.

The U.N. recognizes Fayez Sarraj's government as the country's legitimate authority as Tripoli has battled Haftar's militias since April 2019 in a conflict that has claimed thousands of lives.

On Wednesday, Russian Foreign Minister Sergey Lavrov said the conflict in Libya can only be resolved through diplomacy and all efforts to find a solution should go in the same direction.

Pointing out that all work in this direction should be carried out under the auspices of the U.N., Lavrov said that following the meeting held between Libyan parties in Cairo, preparations were underway for a meeting in Geneva.

He stressed that the urgent appointment of a new U.N. special envoy for Libya, a position which has been vacant since March, is important, adding, "It is no secret that the main obstacle preventing it is the U.S. position."

The GNA in June turned back a 14-month assault on the capital Tripoli by the eastern-based Haftar forces, and the two are now dug in along a front line near Sirte.

Sirte briefly served as a stronghold for the Daesh terror group before being liberated by the GNA in 2016 until it fell into the hands of Haftar's camp last January. Taking Sirte would open the gate for the Tripoli-allied forces to advance farther eastward and potentially seize control of vital oil installations, terminals and oil fields that forces loyal to Haftar shut down earlier this year, cutting off Libya’s major source of income.