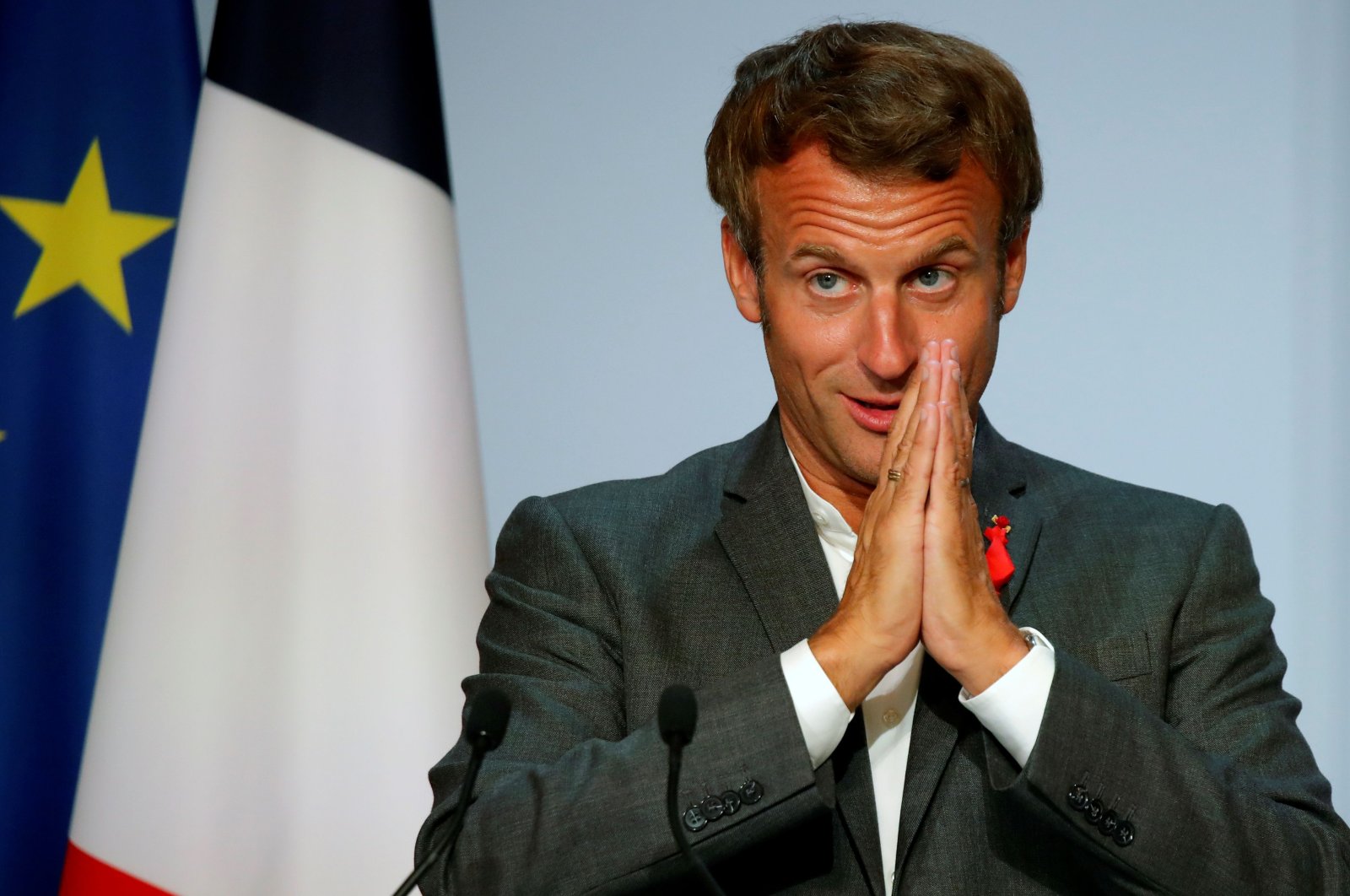 French President Emmanuel Macron gestures as he delivers an address to French tech startups at the closing ceremony of the National Council of French Tech Capitals and Communities (CNCC) at Elysee Palace in Paris on Sept. 14, 2020. (AFP Photo)
by DAILY SABAH WITH AGENCIES Sep 19, 2020 11:31 am
RECOMMENDED

French President Emmanuel Macron on Saturday called on Turkey to reopen a "responsible dialogue" on the Eastern Mediterranean.

"In Ajaccio, we sent a clear message to Turkey: Let's reopen a responsible dialogue, in good faith, without naivety. This call is now also that of the European Parliament. It seems to have been heard. Let's move on," Macron said in a tweet in Turkish.

Turkey intends to give diplomacy the best chance possible, resolving issues through dialogue in a way that benefits all parties, President Recep Tayyip Erdoğan also said Saturday following the calls for talks from French counterpart Macron.

In a series of tweets, Erdoğan said that Turkey would pay no regard to persistent provocations, stating that Ankara had carried out these processes in a determined and mature manner.

"With this goal, we will continue to defend every drop of water and every inch of land in our country right to the end," he said.

Turkey on Friday accused Macron of adding fuel to the fire in the Eastern Mediterranean and making it harder to solve problems.

In an exclusive interview with Britain's Channel 4 News, Turkish Defense Minister Hulusi Akar said the French president is trying to take on the role of Napoleon who died two centuries ago but Macron is not strong enough for this.

Akar said Macron is trying to play a role in the Eastern Mediterranean to conceal his problems in France.

He stressed that Turkey defends its rights and interests, reminding that it has approximately 2,000 kilometers (around 1,242 miles) of coastline in the Eastern Mediterranean.

With regard to the EU's attitude on the issue, Akar said the European Union does not contribute to the solution and has become a part of the deadlock.

He said the EU does not have any authority to set or change rules or draw borders in the Eastern Mediterranean.

Greece has disputed Turkey's energy exploration in the region, trying to box in Turkish maritime territory based on small islands near the Turkish coast.

Turkey – the country with the longest coastline on the Eastern Mediterranean – has sent out drillships, with a military escort, to explore for energy on its continental shelf, saying that both Turkey and the Turkish Republic of Northern Cyprus (TRNC) have rights in the region.

Turkish and Greek military delegations have also held technical meetings at NATO headquarters in Brussels to discuss ways to reduce the risk of an incident amid rising tension in the Eastern Mediterranean.

Turkey and Greece could soon resume talks over their contested Mediterranean claims, but the EU leaders' meeting this week will not help if they threaten sanctions, Turkey's presidential spokesperson also said Sunday.

"Threats of blackmail and sanctions against Turkey do not lead to results," Kalın said. "European politicians should know this by now."

Despite the ongoing efforts to reduce the tensions, the Greek media continued its provocative actions targeting Turkey and its president.

The Turkish government Saturday condemned a headline in a Greek newspaper that insults Erdoğan, urging Athens to take action.

Turkey's Foreign Ministry had already summoned Greece's ambassador over the headline in Dimokratia newspaper, also available on its website.

"I condemn in the strongest terms the publication of insults directed at our president ... on the front page of an extreme right newspaper," Fahrettin Altun, communications director at the Turkish Presidency, wrote in a letter to Greek government spokesperson Stelios Petsas. The letter was made public on Saturday.

He urged Greece to bring to account those responsible for the "shameless" action.

"Insulting a foreign leader is nothing but a sign of helplessness and lack of reason and does not fall within the scope of press freedom or freedom of expression," he said.

Also, Akar on Sunday slammed the despicable headline in the Greek newspaper about President Erdoğan.

"The shameful record will remain a black mark in Greek press history," Akar was quoted in a statement by National Defense Ministry on Twitter.

He condemned the "extremely worthless statement" that appeared in Demokratia's Friday edition, saying it was "not even related to journalism."

The Greek foreign ministry had said on Friday that freedom of expression was fully protected in the EU member country but added: "The use of offensive language is contrary to our country's political culture and can only be condemned."