Migrants accuse Greece of pushing back, abandoning them at sea 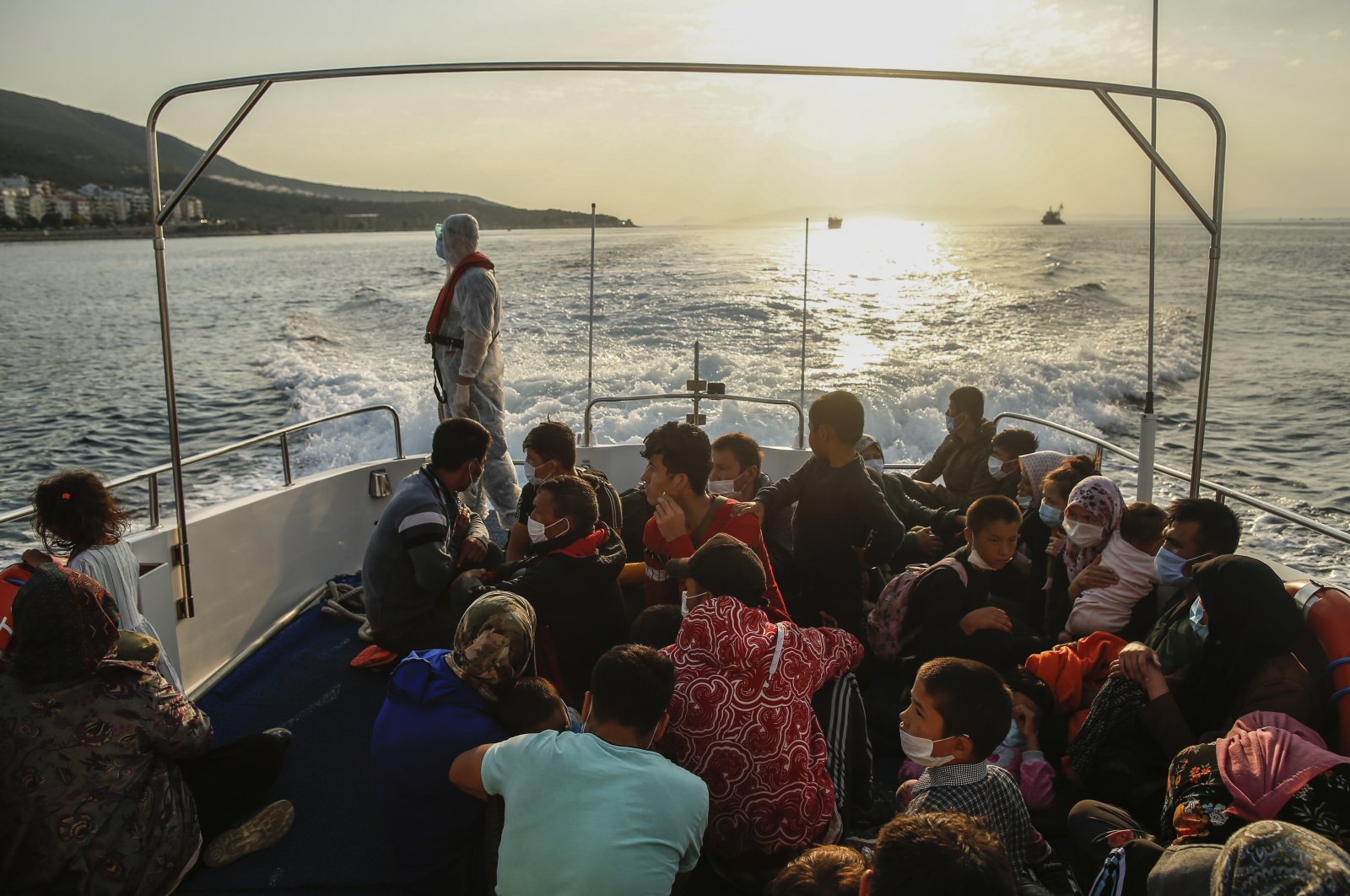 Migrants sit on a Turkish Coast Guard vessel after they were pulled off life rafts, during a rescue operation in the Aegean Sea, between Turkey and Greece, Sept. 12, 2020. (AP Photo)
by Daily Sabah with AP Sep 25, 2020 11:18 am
RECOMMENDED

Migrants have accused Greece of using violence and pushing them back out to sea, in clear violation of human rights, in order to prevent their entry to the country.

Shortly after reaching the Greek island of Lesbos, a group of Afghan migrants said their hopes for a new life in Europe were cut short when Greek authorities rounded them up, mistreated them, shoved them into life rafts and abandoned them at sea.

Associated Press (AP) journalists on a Turkish government-organized coast guard ride-along were aboard the patrol boat that picked up the 37 migrants, including 18 children, from two orange life rafts in the Aegean Sea on Sept. 12. Two other media organizations on similar government-organized trips in the same week witnessed similar scenes.

“They took our phones and said a bus will come and take you to the camp,” Omid Hussain Nabizada said in Turkish. “But they took us and put us on a ship. They left us on the water in a very bad position on these boats.”

Turkey, which hosts about 4 million migrants, has accused Greece of large-scale pushbacks and summary deportations without access to asylum procedures, which is a violation of international law. It also accuses the European Union of turning a blind eye to what it says is a blatant abuse of human rights.

The Turkish Coast Guard says it has rescued over 300 migrants “pushed back by Greek elements to Turkish waters” this month alone. Citing what they say are credible reports, international rights groups have called repeatedly for investigations.

Migrants accuse Greece of using violence, abandoning them at sea in order to prevent their entry into countryhttps://t.co/arn0E5IG9u pic.twitter.com/2cBHxD7brg

Greece, which lies on the EU’s southeastern border and has borne the brunt of migration flows from Turkey, denies the allegations and in turn, accuses Ankara of weaponizing migrants.

Uneasy neighbors Greece and Turkey have been at loggerheads for decades over several territorial issues, and migrants have found themselves caught up in the geopolitical conflict. The tension between the two countries rose dramatically this summer over Eastern Mediterranean maritime boundaries, leading to fears of war.

In March, Turkey decided not to prevent migrants from crossing the Greek border, which led to thousands arriving to cross into the EU via Greece. Greek security forces were deployed to prevent people from entering at the time. The EU border agency Frontex was also stationed at the Greek-Turkish border.

Greece responded harshly to the undocumented migrants trying to enter the country after Ankara decided to open its borders, killing at least three and battering and tear-gassing many others, as verified by human rights groups.

Other rights groups and refugee organizations, including the United Nations High Commissioner for Refugees (UNHCR), have repeatedly called on Greece to investigate what they say are credible reports and testimony of such expulsions occurring.

UNHCR Assistant High Commissioner for Protection Gillian Triggs, reiterating the call for an investigation, said recently that, “With our own eyes on Lesbos, it was quite clear no boats were coming through.”

Earlier this month, Greece’s Shipping Minister Giannis Plakiotakis said Greek authorities prevented more than 10,000 people from entering Greece by sea this year. He would not elaborate on how.

Former Migration Minister Ioannis Mouzalas pressed for details from the current minister, Notis Mitarachi, in parliament on Sept. 21, saying this appeared to violate Greek and international law. He asked directly whether the government carries out pushbacks.

The four Afghans on the life rafts seen by AP said they reached Lesbos from Turkey’s western Çanakkale province on the night of Sept. 11-12 and were caught by Greek law enforcement during daylight.

One of them, Nabizada, said police hit him while forcing him into the raft.

“They didn’t say, ‘there are children, there are families, there are women.’ ... People don’t do this to animals. The Greek police did it to us,” said the 22-year-old. He said he left Kabul in 2017 and crossed to Turkey via Iran, aiming for Europe.

Zohra Alizada, 14, said police took their phones and money, put them in the rafts and left. She was traveling with her parents and two siblings after living in Kars, in eastern Turkey, for over four years. She said the migrants called the Turkish Coast Guard for help.

Her father, Mohammad Reza Alizada, said Greek authorities inflated the rafts “and they threw us like animals inside.”

The Turkish Coast Guard, clad in protective equipment as a measure against COVID-19, took them aboard after checking their temperature.

Turkish Foreign Minister Mevlüt Çavuşoğlu raised the allegations against Greece in an August news conference with his German counterpart.

He said Turkey has shown through government and media reports that Greece is pushing back migrants at sea, adding that, “There have been numerous articles published.”

“How do sinking boats in the middle of the Aegean Sea or sending them to Turkey by pushbacks fit international rights and universal values?” Çavuşoğlu asked.

An independent Norway-based watchdog says it has documented at least 50 cases since March of migrants being put into life rafts and left adrift.

“They are not going into these life rafts willingly. They are forced,” said Tommy Olsen of the Aegean Boat Report, which monitors arrivals and rights abuses in the Aegean.

He said his group had no information about the rafts the AP saw, but that it was consistent with similar reports.

“Usually you save people from life rafts,” Olsen said. “You don’t put them on life rafts and leave them.”