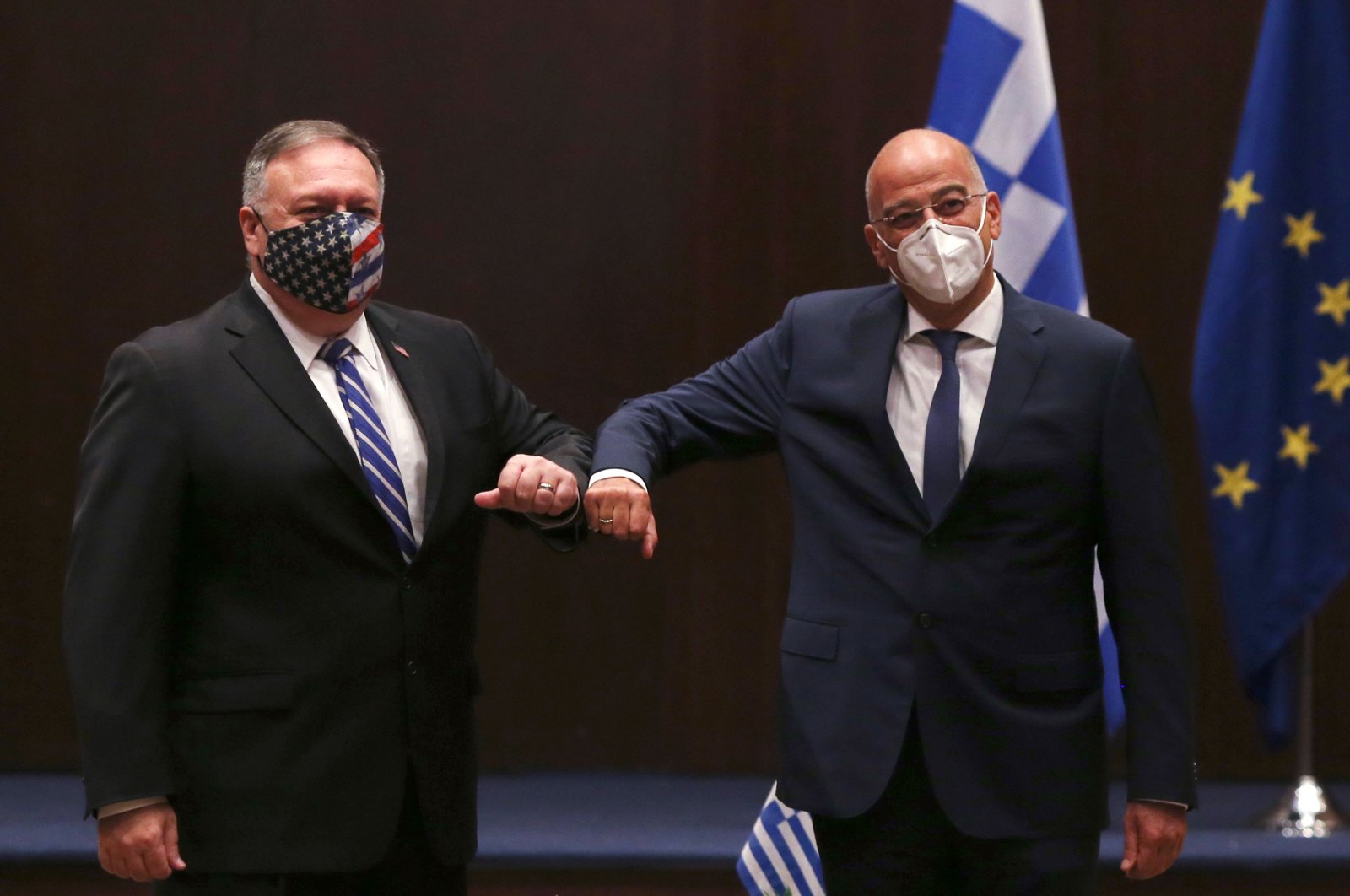 U.S. Secretary of State Mike Pompeo met with Greek Foreign Minister Nikos Dendias in the northern Greek city of Thessaloniki Monday, the first leg of a five-day regional tour that will include Italy, the Vatican and Croatia.

Rival claims to potentially resource-rich territory under the Mediterranean should be resolved "peacefully in accordance with international law," said Pompeo and Dendias in a joint statement after holding talks in Thessaloniki.

Pompeo, on a two-day visit to Greece, said in the joint statement that the United States "welcomed Greece's confirmed readiness to engage with other countries in the region to achieve maritime delimitation agreements."

Tension in the Eastern Mediterranean was expected to be the subject of focus during Pompeo's two-day stay in Greece, which also includes a visit to the Souda Bay naval base on the southern island of Crete Tuesday.

The tone, however, has recently softened between Ankara and Athens, with the two agreeing last week to begin exploratory talks on their dispute.

The upcoming negotiations will be the 61st of its kind, as the two countries started to have exploratory talks on problems in the Eastern Mediterranean on March 12, 2002, with an aim to come up with a fair, sustainable and inclusive solution.

Still, EU members are to discuss imposing sanctions on Turkey amid Greek demands.

The U.S. secretary of state also discussed the situation in the Eastern Mediterranean late Sunday with NATO Secretary-General Jens Stoltenberg as he headed to Greece.

“Pleased to speak today with @NATO Secretary General @jensstoltenberg to discuss de-escalation of the situation in the Eastern Mediterranean and reiterate the importance of NATO Alliance unity,” Pompeo tweeted.

Amid the tension, Greece has announced major arms purchases, including fighter jets from France, as well as warships, helicopters and weapons systems.

A key element of the October deal was the northern Greek port of Alexandroupolis, the Balkans and the Black Sea gateway which are of strategic value to the U.S. Navy and NATO.

The U.S. has been granted priority status at the port after paying roughly $2.3 million (2 million euros) to remove a sunken dredging barge that had blocked part of the harbor since 2010.

At the time, Greek officials said the Pentagon was expected to invest over $14 million on the Greek air base of Larissa and around 6 million euros at Marathi, part of the Souda Bay base.

Pompeo has become the first U.S. secretary of state that visited Greece’s second-largest city of Thessaloniki. Security was tight in the port city, with the venue of Pompeo's meeting with Dendias changing from the originally planned location, a local ministry, to a hotel for security reasons, authorities said.

Pompeo was expected to depart later Monday to Crete, where he is also scheduled to meet with Greek Prime Minister Kyriakos Mitsotakis.

"Thrilled to be back in Greece, a vital U.S. partner with whom we share a common strategic vision," the secretary of state tweeted ahead of his visit to the country.

"The strength of our bilateral relationship is at an all-time high, and I'm looking forward to a productive visit," he added.

Ahead of the trip, a senior U.S. official said Washington was keen to tamp down the tension, reduce the likelihood of "accidents or incidents" and for Greece and Turkey to complete an agreement.