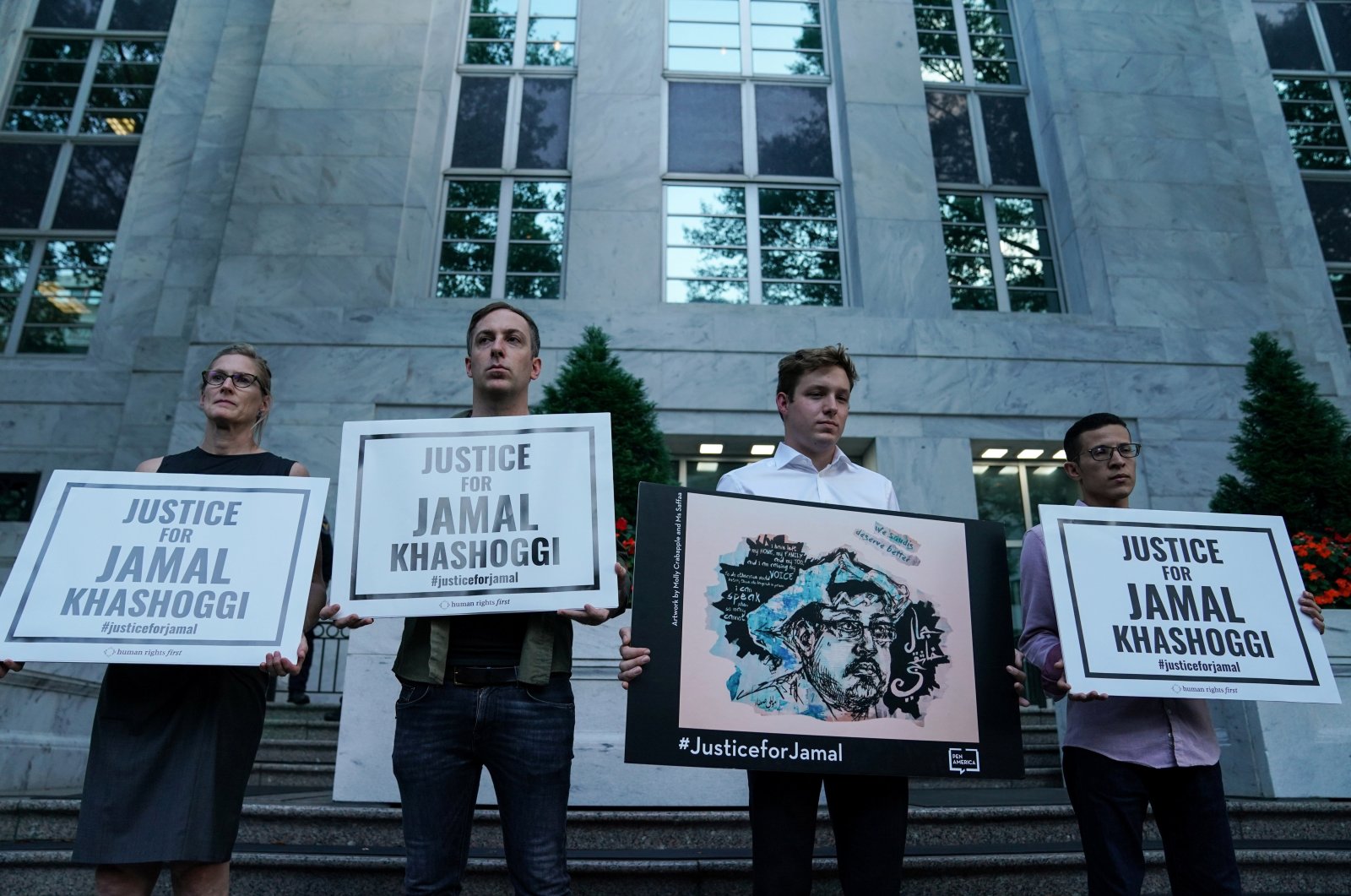 The Committee to Protect Journalists and other press freedom activists hold a candlelight vigil in front of the Saudi Embassy to mark the anniversary of the killing of journalist Jamal Khashoggi at the kingdom's consulate in Istanbul, Washington, D.C., Oct. 2, 2019. (Reuters Photo)
by Daily Sabah with Reuters Sep 28, 2020 12:02 pm
RECOMMENDED

Turkish prosecutors on Monday prepared a second indictment against six Saudi officials in connection with the 2018 murder of Saudi journalist Jamal Khashoggi in Istanbul.

It was also reported that the charges against the other four carried sentences of up to five years in jail.

The reports did not specify whether the six suspects were among those already being tried in absentia in an Istanbul court for Khashoggi's killing.

The first public trial in Khashoggi's murder against 20 Saudi nationals opened in Istanbul in July.

In April, a Turkish court accepted an indictment on the killing of Khashoggi in the Saudi Consulate in Istanbul.

The 117-page indictment prepared by Istanbul prosecutors accuses the 20 Saudi nationals of involvement in the gruesome premeditated murder and was accepted by Istanbul's Heavy Penal Court No. 11.

The indictment stated that suspect Mansour Othman M. Abbahussain, working as a major general and intelligence officer in Saudi Arabia, was tasked in MBS' office and was instructed by Ahmed Bin Mohammed al-Asiri to bring Khashoggi back to the country, or kill him if he resisted. It added that Abbahussain assembled a 15-man hit squad, including himself, for the murder.

Abbahussain also determined the place to meet Khashoggi as the working office at the Istanbul consulate and made plans for all contingencies before, during and after the deed.

It also accuses 18 other Saudi nationals of involvement in the murder and also recommends aggravated life sentences for each.

The 18 were in consensus over killing Khashoggi if he refused to return to Saudi Arabia and acted on the mutual decision to commit the crime, according to the indictment.

Khashoggi, a columnist for The Washington Post, was killed and dismembered by a group of Saudi operatives shortly after he entered the country's consulate in Istanbul on Oct. 2, 2018. The whereabouts of his body are not yet known.

Khashoggi, according to reports by the United Nations and other independent organizations, was very likely killed on orders of MBS.

A Saudi court this month jailed eight people for between seven and 20 years for the murder, four months after Khashoggi's family forgave his killers and enabled earlier death sentences to be set aside.

Following the decision, Turkey's communications director called on Saudi authorities to "cooperate with the ongoing murder investigation in Turkey" regarding Khashoggi's execution.

Fahrettin Altun on Twitter said the final verdict "regarding journalist Khashoggi's execution inside the Kingdom's consulate in Istanbul, Turkey fell short of meeting the expectations of Turkey and the international community."

"We still don't know what happened to Khashoggi's body, who wanted him dead or if there were local collaborators-which casts doubt on the credibility of the legal proceedings in KSA," he added.

Altun further noted that "it is a legal and conscientious obligation to shed light on the Jamal Khashoggi murder, which was committed within Turkey's borders, and to deliver justice".

"That is the only way to ensure that similar atrocities can be prevented in the future."