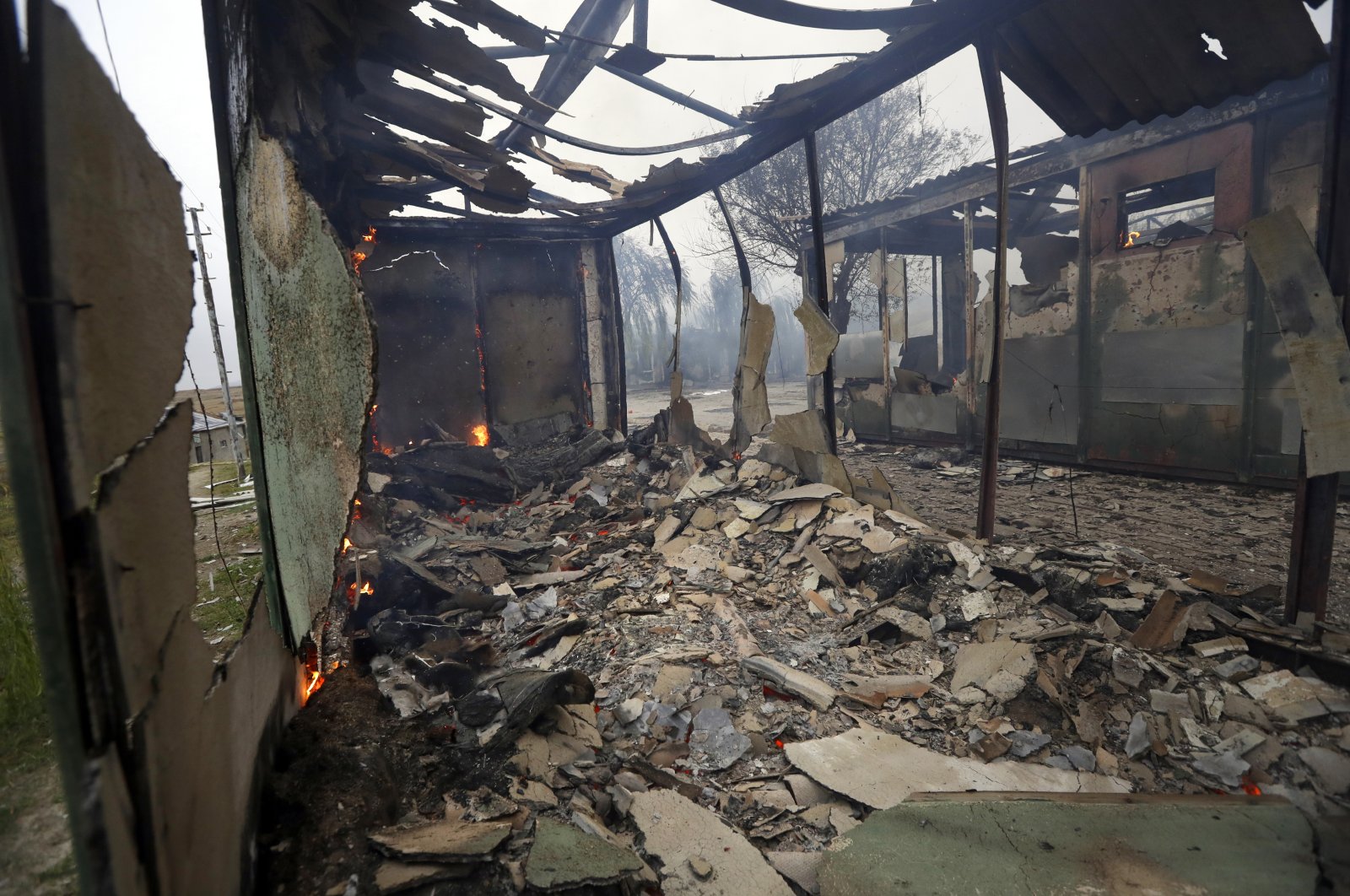 A burnt barn is left in the village of Karmiravan, where ethnic Armenians vacate the area prior to the Azerbaijani forces being handed control in the region of Nagorno-Karabakh, Nov. 19, 2020. (AP)
by DAILY SABAH WITH AA Nov 24, 2020 12:39 pm
RECOMMENDED

Turkey's Ombudsman Institution prepared a report on Armenia's war crimes and human rights violations against Azerbaijan, detailing the atrocities by the Armenian Army in the Nagorno-Karabakh region before its recent liberation.

Speaking to Anadolu Agency (AA), the head of the institution, Şeref Malkoç, said that from this week on, the report will be sent to all the related institutions both within and outside Turkey, including the European Union and EU countries' parliaments' human rights commissions.

Malkoç, reiterating that one of the main duties of the Ombudsman Institution is to work toward improving and protecting human rights at both the national and international level, expressed that they have visited Azerbaijan and examined the civilian settlements damaged during Armenian attacks.

"During our visit to Azerbaijan, we conducted our inspections in areas particularly outside the war fronts, in civilian settlements such as Ganja, Tartar, Goranboy, Aghdam and even the areas near Baku, which were all hit by Armenian missiles," Malkoç said, adding that in these attacks, a total of 94 Azerbaijani civilians were killed, while 414 others were injured.

"Of course we all wish to not have any war at all. However, according to international law, either in self-defense or for other possible reasons, there might be wars sometimes on the fronts. However, deliberately hitting a civilian settlement area that is outside of the war front by 100-150 kilometers is a crime against humanity. It is against the basic rights that are referred to in the European Convention on Human Rights, as well as the Geneva Convention," Malkoç continued.

Ganja has become one of the most targeted Azerbaijani towns of the most recent conflict. The first Armenian attack on the region took place on Oct. 4, when a missile hit the city and killed one while injuring 30 others. The second attack took place on Oct. 8 during which many residential buildings were damaged, however, no loss of life was incurred. Then, on Oct.10, only a day after Russia brokered a cease-fire between the warring sides, Armenia attacked for the third time. An Armenian Scud missile hit an apartment complex in Ganja, completely destroying it. During this attack, the city's infrastructure was heavily damaged as well. In the attack, 10 civilians were killed and 40 others were injured, including women and children. A total of 95 buildings were damaged, impacting the lives of approximately 205 people. The fourth and final attack took place on Oct.17. After the firing of the Armenian Scud missiles, three massive explosions rocked the city. These attacks were made in densely populated areas.

The attack damaged about 20 buildings and killed 15 civilians, while fifty-five civilians were also injured. The attacks have been strongly condemned by Azerbaijan and Turkey, while Armenia denied targeting civilian settlements in the city. Although countries such as Qatar, Malaysia, Switzerland and the U.K. expressed their condolences over the incident, the majority of the international community has remained mostly silent. Condemnation came from the EU regarding the fourth attack, while the U.N. referred to the incident as "unacceptable."

Expressing that during their visit they had to witness the most brutal outcomes of the war, Malkoç said they conducted interviews with the relatives of the victims of the war.

"We talked with children who lost their parents. We saw the damaged schools, houses. We saw the damage that the sanctuaries had to suffer due to the attacks. We saw how the environment was damaged, and how the forbidden weapons, bombs were used. Our report explains all this," Malkoç highlighted.

New clashes erupted on Sept. 27 and the Armenian Army continued attacks on civilians and Azerbaijani forces, even violating humanitarian cease-fire agreements for 44 days.

Baku liberated several cities and nearly 300 settlements and villages from the Armenian occupation during this time. On Nov. 10, the two countries signed a Russia-brokered agreement to end fighting and work toward a comprehensive resolution.

Based on seven chapters, the report has titles such as "The problem of Nagorno-Karabakh," "Determinations reached as a result of the physical site visit" and "The evaluation of the conflicts from the perspective of human rights."

"Apart from these, we also made a chronological list of the Armenian attacks within our report. We have inspected the photographs of the civilians who fell victim to Armenian attacks and places that they were killed one by one," Malkoç said.

"By determining the ones who committed war crimes, killed civilians, damaged the environment, killed infants or elderly – who have nothing to do with the war after midnight, we have worked to bring these criminals to the international court to be judged for their crimes," he added, indicating that they have completed their part, and now it is time for the international institutions to do whatever it takes to get justice for the victims.

"They have committed crimes against the history in Shusha, Aghdam, Tartar and Kalbajar. They turned the mosques into pig barns. They damaged the cemeteries of the Muslims. How can this be possible? The massacres such as Khojaly, as well as these crimes, will be judged so that no one would dare to act the same way ever again," he expressed.

The report expressed that the Armenian Army not only attacked civilian settlements but also used bombs such as cluster munitions that kill without discriminating between innocents and foes, which is why the weapons have been deemed illegal by international law.

The report contains pictures of civilian settlements and states that include a total of 3,410 houses, 120 apartments and 512 civilian facilities heavily damaged during the attacks.

In videos shared on Instagram by Aliyev's wife and the country's first vice president, Mehriban Aliyeva, President Aliyev can be seen driving a vehicle.

The president said in the footage that the couple was en route to Aghdam. He also added that the Azerbaijani army had managed to liberate Aghdam from Armenian occupation without firing a single bullet.

Emphasizing that they had defeated the enemy on the battlefield and forced them to withdraw from Aghdam, Aliyev said that the Armenian forces had established several defense lines in the region.

Aliyev showed the villages left in ruins, underlining it was something the whole world should see. Aliyev, noting that there was not a single solid structure left standing, emphasized that the Armenian government would be held accountable for the war crimes it committed.

Armenian civilians and soldiers in the territories belonging to Azerbaijan continue to leave the region in line with the peace deal.

Despite some Armenians leaving the region torched houses, public buildings, and forests, the Azerbaijani soldiers allowed Armenians, who could not leave the liberated lands in time, to take extra time.

In a visual circulating on social media, some Armenian civilians are seen raising white flags in front of Azerbaijani soldiers to ask for more time.

The Azerbaijani troops are seen waiting in front of the house and letting Armenians carry their belongings to a truck.