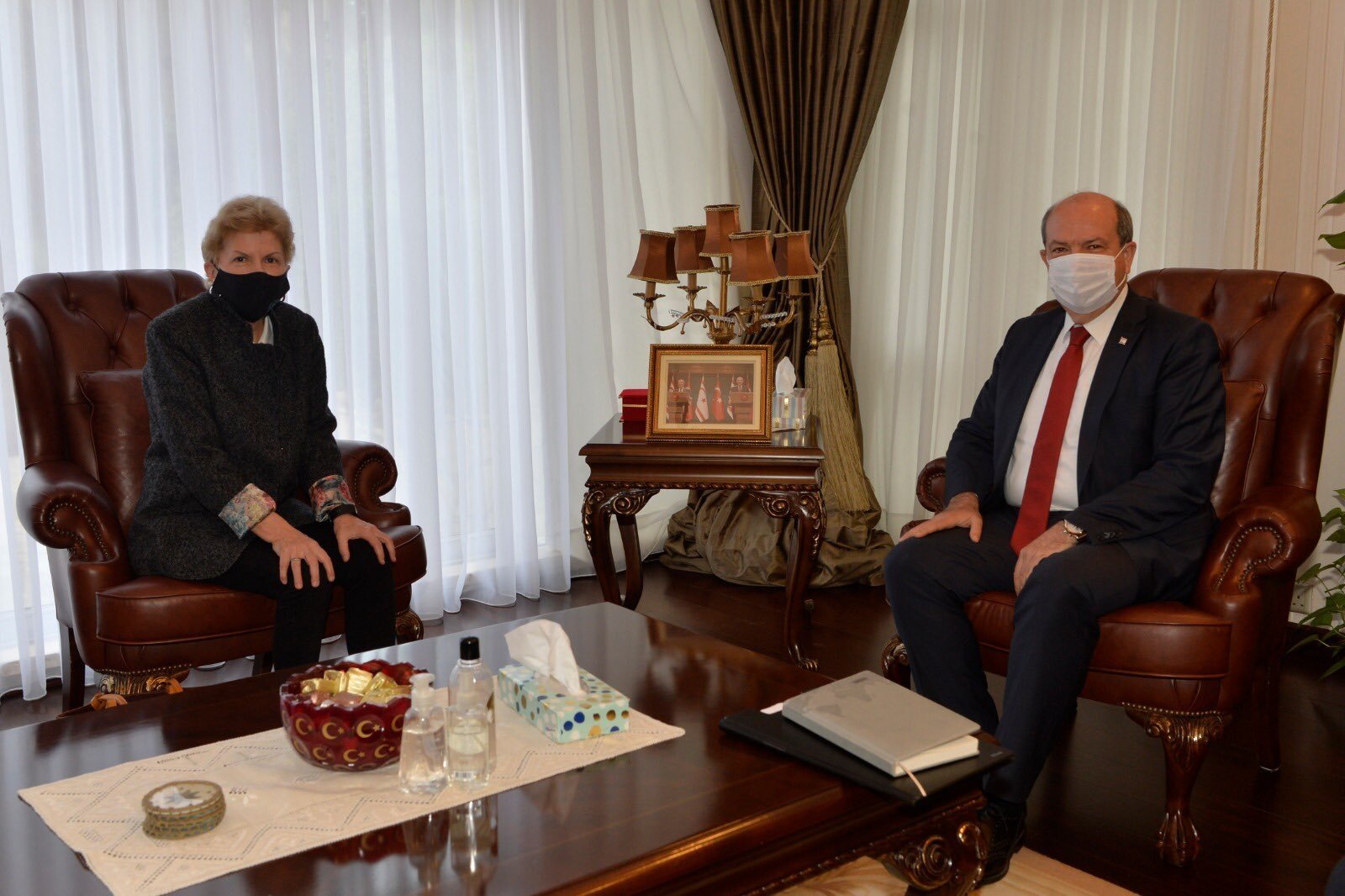 The Turkish Republic of Northern Cyprus (TRNC) seeks a resolution that would allow coexistence for two sovereign states on the island of Cyprus, TRNC President Ersin Tatar said late Monday, as U.N. Secretary-General Antonio Guterres intends to meet next month with Tatar and the Greek Cypriot administration leader Nicos Anastasiades to gauge whether conditions are ripe to resume dormant peace talks.

Tatar on Monday received the U.N. envoy to the island. After talks with Jane Hall Lute at the Presidential Palace in the capital Lefkoşa (Nicosia), Tatar expressed satisfaction with the meeting and looked to define any future negotiations over the divided island's future.

Reiterating that 50 years of negotiations, based on federalism had yielded no results, he said, "We underlined that we are seeking a resolution that would allow coexistence for two sovereign states on Cyprus."

Pointing to Turkey's key role for a resolution on the island, he said Turkish Cypriots know the benefits of cooperation with Turkey.

"We co-administer the process with Turkey. We, Turkish Cypriots, are in full cooperation and consultation with Turkey," he said.

"Turkish Foreign Minister Mevlüt Çavusoğlu has been involved in this for years and has mastered it," he added.

Addressing the EU ambassadors in the capital Ankara, President Recep Tayyip Erdoğan on Tuesday said instead of getting stuck on "failed models" for the Cyprus issue, parties need to discuss new, more realistic alternatives.

He also questioned the EU's role in helping resolve the Cyprus issue, pointing out the bloc's recent lack of contact with the Turkish Cypriot side.

Turkey's top diplomat Çavuşoğlu on Monday said sovereign equality must be negotiated and there must be a two-state solution on the island of Cyprus, in a joint news conference in the capital Ankara with his counterpart from TRNC, Tahsin Ertuğruloğlu.

Çavuşoğlu added that Turkey and the TRNC's stance on the issue was very clear. "We are making efforts to holistically explain our stance to all segments," he said, adding that the issue had come to the fore in all his recent visits, especially in Portugal, Madrid and other EU countries.

Greek side ready for talks

Earlier on Monday, Lute also visited Anastasiades on the Greek side of the island.

Anastasiades told the U.N. envoy he is ready to attend an informal conference involving Britain, Greece and Turkey to end a deadlock in peace talks.

"During the meeting, the president of the republic expressed his readiness to participate in the informal five-party meeting," Greek Cyprus government spokesperson Kyriacos Koushios said following the meeting in Nicosia.

"He also expressed his expectation that the ... meeting will lead to a substantial resumption of talks, with the aim of reaching a solution to the Cyprus problem," he told reporters.

Lute had told Anastasiades that Guterres intended to convene a five-party conference in February.

Guterres is hoping to get the three governments more involved to build momentum.

In a report to the U.N. Security Council this month, Guterres said the parties had expressed a willingness to attend an informal conference under his auspices.

"I intend to invite the sides and the guarantor powers to this informal meeting as soon as practicable in 2021," Guterres said.

Guterres also acknowledged "skepticism" on the prospects of peace talks resuming has risen on both sides of the divided island.

In November, rival Cypriot leaders held a "break-the-ice" meeting at which they promised to back a U.N.-led peace push involving the outside powers.

It was their first and only meeting since the Ankara-backed Tatar was elected leader of the Turkish north in October.

Tatar was elected on a platform of seeking a two-state solution for Cyprus, rather than a bi-communal federation.

The two men have acknowledged their positions on the way forward are "far apart."