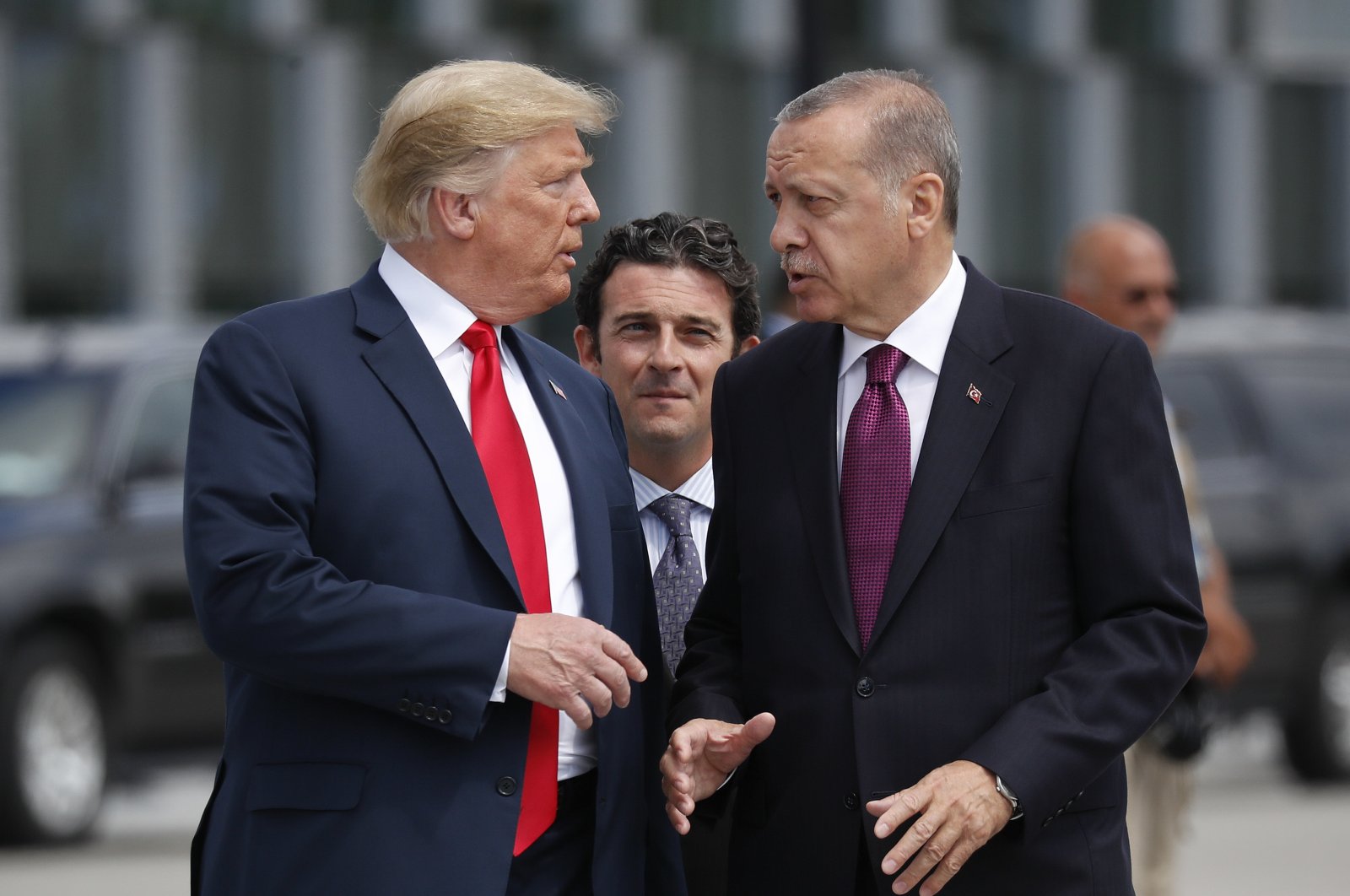 U.S. President Donald Trump (L) talks with President Recep Tayyip Erdoğan as they arrive together for a family photo at a summit of heads of state and government at NATO headquarters in Brussels, July 11, 2018. (AP Photo)
by DAILY SABAH WITH AGENCIES Aug 17, 2020 8:02 pm
RECOMMENDED

U.S. President Donald Trump warned on Monday that former Vice President and current Democratic presidential candidate Joe Biden is “shot” and would not be able to stand up to the “world-class chess players, singling out Turkish president among the world leaders.

“Let’s face it, Joe’s shot,” Trump said during an interview on “Fox & Friends.”

“You’re dealing with people that are very sharp. You’re dealing with world-class chess players in the leaders of these countries. I know them all. We do very well with all of them, (President Recep Tayyip) Erdoğan of Turkey. You can’t have a guy that doesn’t know where he is. You can’t have a guy that’s afraid to leave his basement because he can’t speak any longer,” the president said.

“And by the way, at his best he wasn’t that good,” he added.

Biden has come to the fore with his recent controversial remarks on Turkey.

In a video clip that went viral, Biden said he would seek a regime change in Turkey and expressed his willingness to work with “opposition leadership” in the country to topple Erdoğan in Turkey’s 2023 elections.

Lastly, Turkey’s Foreign Minister Mevlüt Çavuşoğlu on Sunday slammed Biden’s remarks. Only the Turkish nation, not someone from the U.S. or another country, can decide to change its government and president, Çavuşoğlu said in a statement.

“We strongly reject such impositions,” Çavuşoğlu told Anadolu Agency (AA) following his meeting with U.S. Secretary of State Mike Pompeo in the Dominican Republic, adding that Biden's remarks are “ignorant” and fail to recognize the Turkish nation.

He also said it was “strange” that a person who has been nominated to lead the U.S. made such “ignorant comments” on Turkey, and that he doesn’t know the truth about his own country.

Turkey’s presidential spokesman Ibrahim Kalın said: “The analysis of Turkey by Joe Biden was based on pure ignorance, arrogance and hypocrisy.”

Trump also said world leaders have sought his help with Erdoğan because he claimed the Turkish leader will only listen to him.

“The heads of countries last week they called me up, ‘could you call Erdoğan?’” he noted, quoting world leaders whom he did not name.

“I said, ‘Is that because of the United States?’ He says ‘no, that’s because of you. That’s because of your personality. You’re the only one that he’ll listen to,’” Trump said. “I don’t like saying this publicly, but it happens to be true. I get along with him and he listens.”

It is unclear which leader or leaders Trump was referring to during the telephone interview, but the call came amid heightened tensions in the Eastern Mediterranean involving several U.S. allies, including Turkey, Greece, France, and Egypt.

The White House said Sunday Trump spoke with French President Emmanuel Macron and said the leaders “agreed that Greece and Turkey must commit to dialogue, which is the only path to resolving their differences.”

Tensions have been mounting in the region after Athens’ controversial new maritime pact with Egypt. Greek defense sources announced joint military drills Thursday in the Eastern Mediterranean along with France, which has sought to hem in Turkey’s maritime territory.

The exercise, which includes two French Rafale fighter jets, was conducted off the Greek island of Crete after France announced Wednesday it would beef up military presence in the region.

On Saturday, it was announced that a 2017 defense cooperation agreement between the Greek Cypriot administration and France had entered into force Aug. 1.

Fuat Oktay, Turkey’s vice president, slammed the joint exercises and underlying pact, saying they were “unacceptable under any circumstances.”

“It is essential for France not to seek adventure in Cyprus-related matters, and act much more responsibly,” he said.