Turkey backs Azerbaijan not only due to brotherly ties but rightful cause, Speaker Şentop says 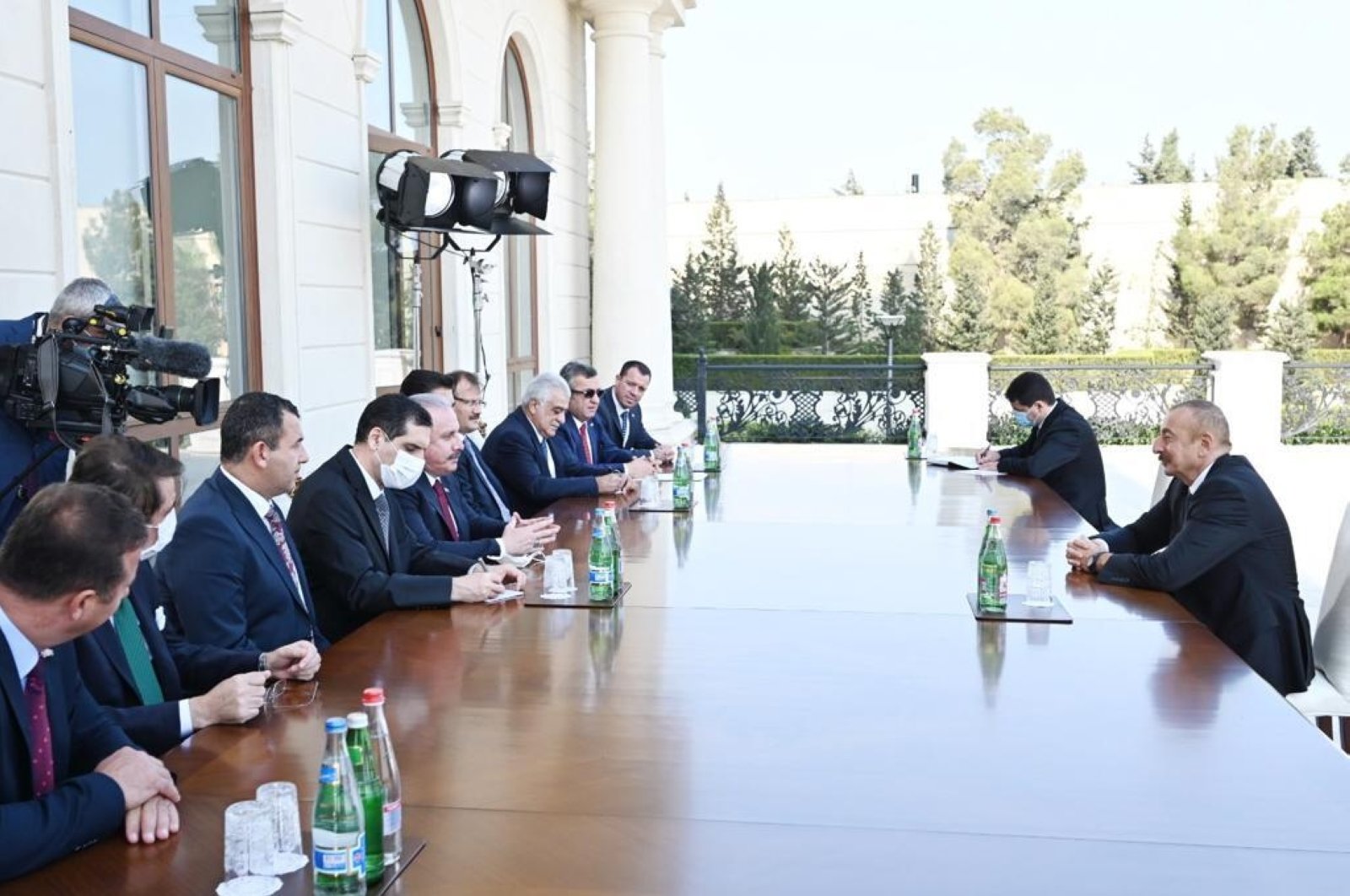 Turkey is not supporting Azerbaijan solely on the ground of friendly, brotherly ties but also because it is right in its case, Turkish Parliament Speaker Mustafa Şentop said Monday.

"Today, all international organizations indicate that Armenia is an occupational force," he said during the second day of his official visit to Baku.

Şentop arrived in Baku on Sunday along with a delegation of deputies from several parties. Turkey’s Parliament speaker met with Azerbaijani President Ilham Aliyev on Monday and later his counterpart and other high-level officials. On Tuesday, Şentop will also address Azerbaijani lawmakers in the National Assembly.

In his reception of the Turkish committee, Aliyev thanked Ankara for its support of the people of Azerbaijan. “Since the beginning of the Armenian attacks, the statements of my dear brother Recep Tayyip Erdoğan, of you as the Turkish Parliament’s head, of the foreign and defense ministers, have all sent a clear message to the world,” he stated.

Şentop reiterated Ankara’s unyielding support to Baku and said: “Turkey is on the side of Azerbaijan in its rightful cause. Whenever Azerbaijan wants support, Turkey is ready.”

During his talks with Azerbaijan's Parliament Speaker Sahibe Gafarova, Şentop underlined the strong ties between the two countries, while Gafarova stated that the nations have signed 249 agreements so far.

The speaker also thanked Turkey's political parties for the joint declaration they signed on Sept. 28 condemning Armenia’s attacks on Azerbaijan.

He also met local journalists to whom he underlined Azerbaijan's historical and lawful rightfulness and stated that its independent flag would fly forever.

Şentop said today's world will not remain silent over Armenia's occupation and war crimes unlike at the time of the Khojaly Massacre 28 years ago.

The town in occupied Nagorno-Karabakh suffered what the Human Rights Watch (HRW) has described as the "Khojaly Massacre."

On Feb. 26, 1992, following massive artillery bombardment, Armenian armed forces and paramilitary units moved in to seize the community. Once the assault began, around 2,500 remaining inhabitants tried to leave, hoping to reach the nearest area under Azerbaijani control but were ambushed, killed by gunfire, captured by Armenian forces or froze to death. A total of 613 ethnic Azerbaijanis lost their lives in the brutal attacks. Some 1,275 were taken hostage, while the fate of 150 victims still remains unknown.

Şentop said Turkey and Erdoğan would continue to voice Azerbaijan's rightfulness to the world.

"The world has to see this war crime. It is seeing it, yet it has to take a position. Particularly the co-chairs of the Organization for Security and Co-operation in Europe (OSCE) Minsk Group have to condemn attacks on civilians. Those staying silent have become a party to the crime,” the parliament speaker said.

Adding that Azerbaijan is responding to Armenia's aggression under its U.N.-guaranteed right to self-defense, Şentop said Baku abides by international law and only hits military targets while Yerevan targets civilians.

"Expecting a country that does not abide by the law of war and that bombs civilians to abide by a cease-fire is foolish," he pointed out.

Speaking about Armenia's deadly attack against civilians on Saturday, when a missile hit a residential area in Azerbaijan's second-largest city Ganja, killing 13 people including children, Şentop said it was possible Yerevan could be tried at the International Criminal Court (ICC).

"This is a war crime according to the Geneva Convention. According to the Rome Statute, though Armenia is not part of the International Criminal Court, it could be possible for it to be tried by a court on war crimes established by the U.N. Security Council (UNSC) and the ICC," he said.

Separately, Baku continued to gain ground on the battlefield against Armenia as its forces raised their flag over the ancient Khudaferin Bridge, close to the border with Iran, a move that indicates a great strategic victory.

Meanwhile, a 58-year-old civilian was injured by an Armenian attack in Tartar in violation of the cease-fire. According to a written statement from the Azerbaijani office of the chief prosecutor, attacks are continuing on villages in the Tartar and Aghjabadi provinces, and as such, 25 houses were seriously damaged in Aghjabadi.

In the face of Armenia's attacks and occupation, the people of Azerbaijan are rallying around Aliyev’s message that "Karabakh belongs to Azerbaijan." While Baku writes its future history, its people await the day when the culturally significant provinces of Khan and Shusha are freed from the 30-year-long Armenian occupation.

Citizens believe that the offensive should not be stopped until Nagorno-Karabakh and 11 other provinces under occupation are taken back and Armenia withdraws from occupied areas completely.

Armenia has pursued its occupation, which takes up nearly 20% of Azerbaijan’s territory, since 1991. Baku has stated that the Minsk Group's proposals, which have for 30 years ignored this occupation and whose co-chairs engage in arms and logistical support to Yerevan, will not be accepted until it guarantees the occupying military's full withdrawal from these areas.

Azerbaijan says that it will now limit the scope of the cease-fires to humanitarian concerns and will use its right to self-defense within its territorial regions where Armenia is continuing its attacks, including Ganja, Jabrayil, Tartar, Fuzuli and Mingachevir.

While the streets of Baku are adorned with Azerbaijani flags, there is a great affinity toward journalists and citizens coming from Turkey. The people of Azerbaijan follow Turkish media outlets closely, but they are also warned about Armenian propaganda and disinformation on social media and through their phones.

Armenia and Azerbaijan agreed to a new cease-fire, which was supposed to have come into force at midnight Sunday, was again failing to hold on Monday as Yerevan engaged in renewed violations.