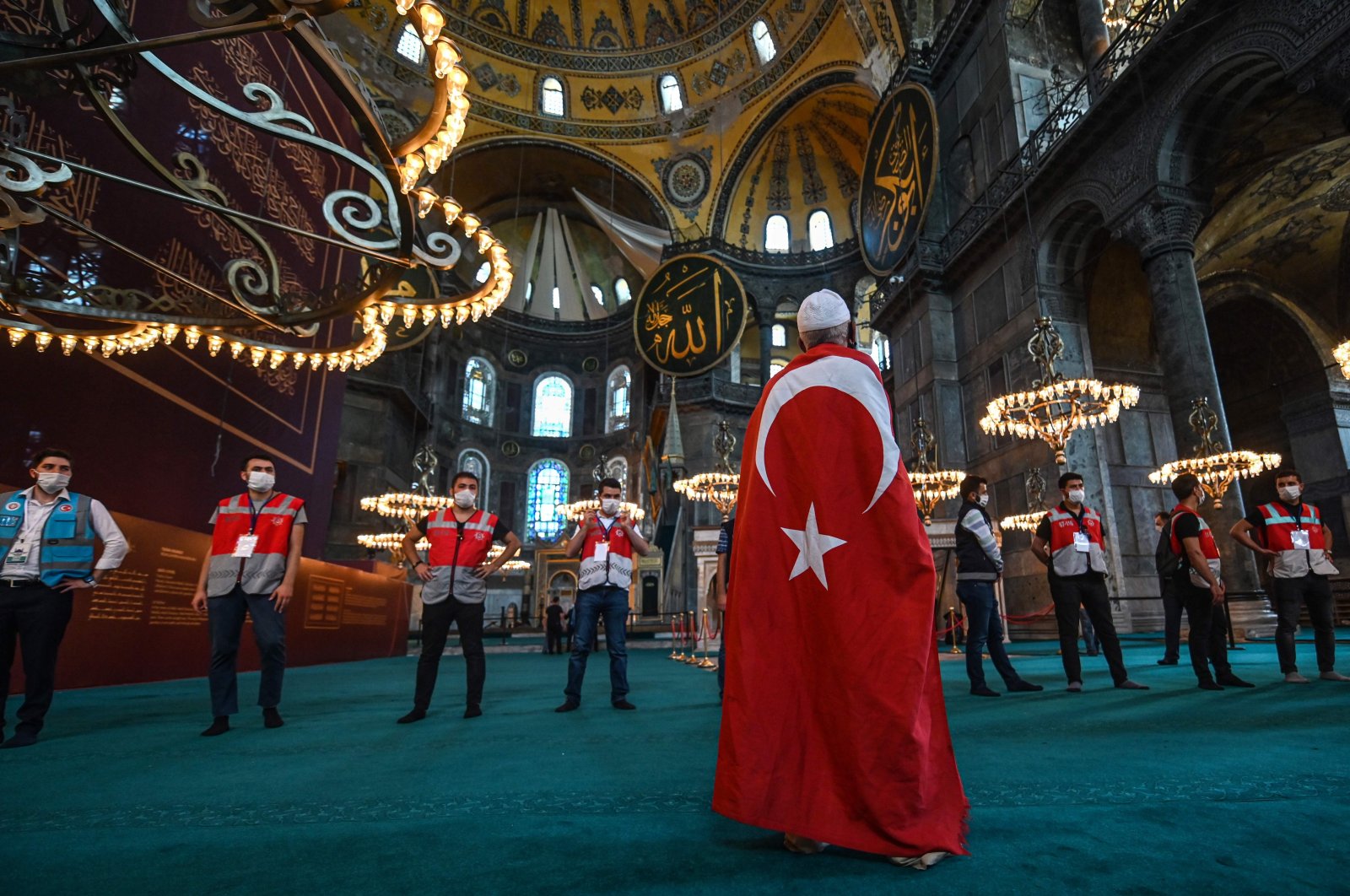 Turkey slammed Greek authorities for provoking the public and allowing the burning of the Turkish flag in Thessaloniki over the reversion of Hagia Sophia into a mosque.

Speaking at the opening ceremony of the new Istanbul office of the country's National Intelligence Organization (MIT), President Recep Tayyip Erdoğan said Sunday: “As we witnessed during the reopening process of Hagia Sophia as a mosque, some still cannot accept the fact that Istanbul belongs to the Turkish nation and Muslims.”

The Defense Ministry on Sunday condemned the incident and said that such abuses and provocations must end immediately.

The Foreign Ministry also released a written statement on Saturday. "We strongly condemn hostile statements made by members of the Greek government and Parliament provoking the public opinion and allowing the burning of our glorious flag in Thessaloniki," Hami Aksoy, a Foreign Ministry spokesman, said in the statement.

Reactions from Turkey came after a group of far-right Greek extremists burned Turkish flags late Friday in Thessaloniki to protest the reopening of Hagia Sophia for worship in Istanbul.

The group burned a Turkish flag after gathering outside the Hagia Sophia Church before marching toward the Turkish Consulate while holding signs that read: "For homeland, nation and orthodoxy."

The protesters were stopped outside the consulate by security forces but burned another Turkish flag and sang the Greek national anthem and shouted slogans.

Aksoy said Greece showcased its hostility against Islam and Turkey once again under the pretext of reaction against the reopening of the Hagia Sophia Grand Mosque in Istanbul for Muslim worship.

He said "the spoiled children of Europe," who cannot accept the reopening of the iconic architecture as a mosque, were "delirious" again.

"These racist mindsets, who have not drawn the required lessons from history, those who disrespect our glorious flag should remember their fate in the Aegean," Aksoy stressed.

"Greece should, from now on, wake up from the Byzantine dream that it has been unable to wake up from for 567 years and get rid of its frustration emanating from it," he said.

The Greek oppression against the Muslim Turkish minority in the country has been registered by the rulings of the European Court of Human Rights, he noted, adding that Greece is the only European country with no mosque in its capital and it has condoned the destruction of historical mosques in its territory.

Aksoy highlighted that the Hagia Sophia Grand Mosque has reopened for worship in line with the will of the Turkish nation.

He added that the mosque, like other cultural assets on the Turkish lands, belongs to Turkey, and said: "It will be in our possession and protection forever."

He also stressed that the reopening of it for Muslim worship complies with the "requirements and spirit" of the 1972 UNESCO Convention on the Protection of the World Cultural and Natural Heritage.

"No country can teach Turkey about exercising its national sovereignty," he warned.

"In line with Turkey's commitment and tradition of tolerance to all religious rights and freedoms, the Hagia Sophia Grand Mosque, the sanctuary of Islam, the religion of peace which embraces all religions, will continue to be open to all," Aksoy said.

Ömer Çelik, a spokesman for the ruling Justice and Development Party (AK Party), also condemned the burning of the Turkish flag in Greece.

"We strongly curse the burning of our glorious flag in Greece. We condemn the politicians who encouraged the Greek fascists who are trying to protest the reopening of the Hagia Sophia Grand Mosque," Çelik said on Twitter.

He added that those who hung the Byzantine flag next to the Greek flag on Friday and declared mourning cannot disrespect our flag.

"The Hagia Sophia Grand Mosque is open to everyone as a common value of all humanity," he stressed.

Following reactions from Turkey, Greek authorities on Saturday also condemned the burning of the Turkish flag during protests in Thessaloniki a day earlier.

"We categorically condemn any action that desecrates a national symbol of any country, in this case of Turkey," Greece's Foreign Ministry said in a tweet.

Hagia Sophia reopened for worship Friday for the first time in 86 years. Earlier, this month a Turkish court annulled a 1934 Turkish government decree that transformed the historic building into a museum, paving the way for its use as a mosque.

Hagia Sophia served as a church for 916 years until the conquest of Istanbul and as a mosque from 1453 to 1934, for nearly 500 years and most recently as a museum for 86 years.

Thousands of people took part in Friday prayer both inside and outside the historic mosque in Istanbul, Turkey's largest metropolis.

Besides being a working mosque, Hagia Sophia is also among Turkey's top tourism destinations and will remain open for domestic and foreign visitors.

On Friday, Greek Prime Minister Kyriakos Mitsotakis called Turkey a "troublemaker" and the conversion of the site an "affront to the civilization of the 21st century."

Greece and Turkey disagree on a range of issues from airspace to maritime zones in the eastern Mediterranean and ethnically split Cyprus.