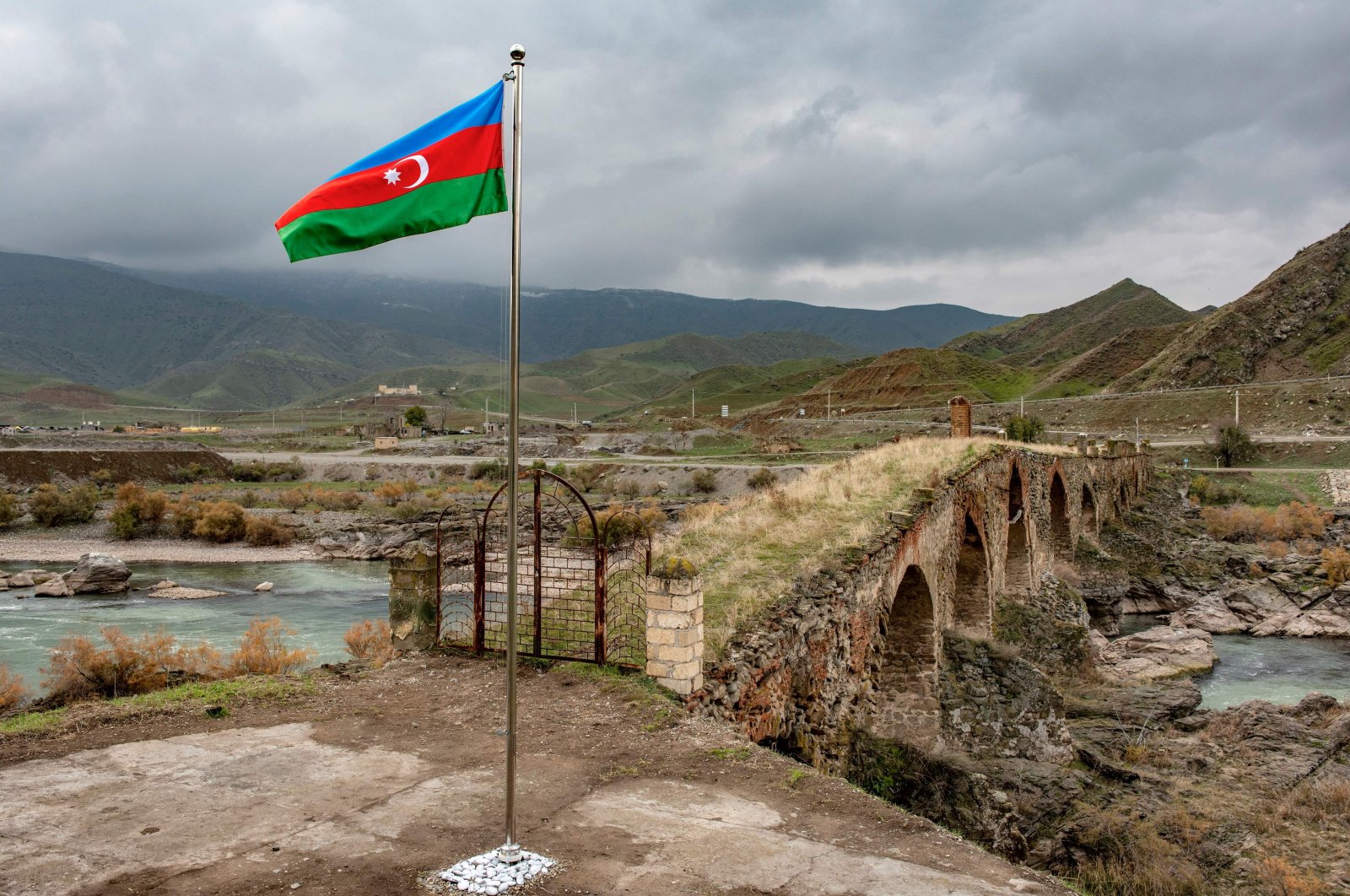 An Azerbaijani national flag flies next to the medieval Khudaferin bridge in Jebrayil district at the country's border with Iran, Azerbaijan, Dec. 9, 2020. (AFP Photo)
by DAILY SABAH WITH AGENCIES Dec 12, 2020 3:28 pm
RECOMMENDED

Ankara has condemned a series of "aggressive" comments made by Iranian officials, following a poem recited by President Recep Tayyip Erdoğan during his visit to Azerbaijan last week, accusing the president of supporting the secession of ethnic Azerbaijani parts of Iran.

On Thursday, Erdoğan attended the victory parade at Azadliq Square in the capital Baku as the guest of honor to celebrate Azerbaijan's recent military success in liberating certain territories in the Nagorno-Karabakh region from nearly 30 years of Armenian occupation. The president recited a poem about the Aras River on the Iranian-Azerbaijani border in celebration of the occasion.

“They separated the Aras River and filled it with sand. I will not be separated from you. They have separated us forcibly,” reads part of the poem.

Iran is home to a large Azerbaijani community, mainly in northwestern provinces next to Azerbaijan and Armenia, where the Aras river defines the border.

On Friday, Iran’s Foreign Minister Javad Zarif claimed on Twitter that the poem “refers to the forcible separation of areas north of Aras from Iranian motherland.”

Çavuşoğlu slammed the unfounded statements concerning Turkey and President Erdoğan in a phone call with his Iranian counterpart Mohammad Javad Zarif, according to sources who asked to remain anonymous due to restrictions on speaking to the media.

The sources said that during the conversation, the Iranian side's attitude toward the poem was discussed, noting that Çavuşoğlu explained that the poem Erdoğan recited in Baku was in reference to Karabakh and that the president did not even implicitly mention Iran during his speech.

Although channels were open to voice views on the issue to Turkey, Iran's baseless, heavy statements that targeted the Turkish president were "unacceptable," Çavuşoğlu stressed.

Iran forgetting that Turkey supported the country when all others turned their backs only adds to Turkey's disappointment in the baseless accusations.

Turkey's communications director on Saturday also condemned the aggressive statements made against Erdoğan and Turkey on the pretext the poem was deliberately taken out of context.

Highlighting that Erdoğan had read a poem by Azerbaijani poet Bakhtiyar Vahabzadeh at the Victory Parade in Baku after the liberation of the Azerbaijani territories, Altun added that it was an attempt to use the poem to create artificial tension and that Iran's name was not even mentioned in the poem.

He said the poem is emblematic of the feelings of the victims of the Armenian occupation of the Azerbaijani lands.

Altun said instead of sharing in the rightful victory of its neighboring country, he found it hard to understand Iran's distortion of the poem's meaning, adding that Iranian officials seem to be trying to create meaningless tension and put forward an attitude that would please Armenia.

He added that Turkey's reaction to the unjust accusations was brought to the attention of the Iranian ambassador to Ankara, Mohammad Farazmand, and it was also relayed that Turkey expected a more sensitive approach to the issue. The ambassador was summoned to the Turkish Foreign Ministry on Friday.

Altun said at a time when the region's peace, stability and security are a great responsibility for the two countries, it is extremely important to avoid discourse that could overshadow bilateral relations.

"We advise the Iranian authorities to get rid of this delusional mood as soon as possible and to take advantage of our common historical past and strong ties between our peoples to create a positive agenda and not hostility," he said.

Parliament Speaker Mustafa Şentop on Saturday condemned Iranian authorities over the unfair accusations and said in a Twitter message: "The unseemly attitude of some Iranian officials against our president, who always bravely defended the law against the embargo and isolation imposed on Iran, can never be accepted.”

Noting that the Iranian reaction showed Erdoğan that "they have not shown to those who imposed sanctions on their country."

"I strongly condemn the (baseless) statements and ugly publishing (from Iran)," he said.

Turkey's ruling Justice and Development Party (AK Party) spokesperson Ömer Çelik also condemned Iranian politicians over their language and said these politicians have lost their way and are confused about Iran's enemies, since Turkey and Erdoğan have always regarded Iran as a friendly and brotherly country.

Çelik reminded that only Erdoğan raised his voice against sanctions on Iran while everybody else remained silent.

"Our president has always opposed injustices against brotherly Iran. Iranian politicians who overstep should be respectful when talking about our president," he said.