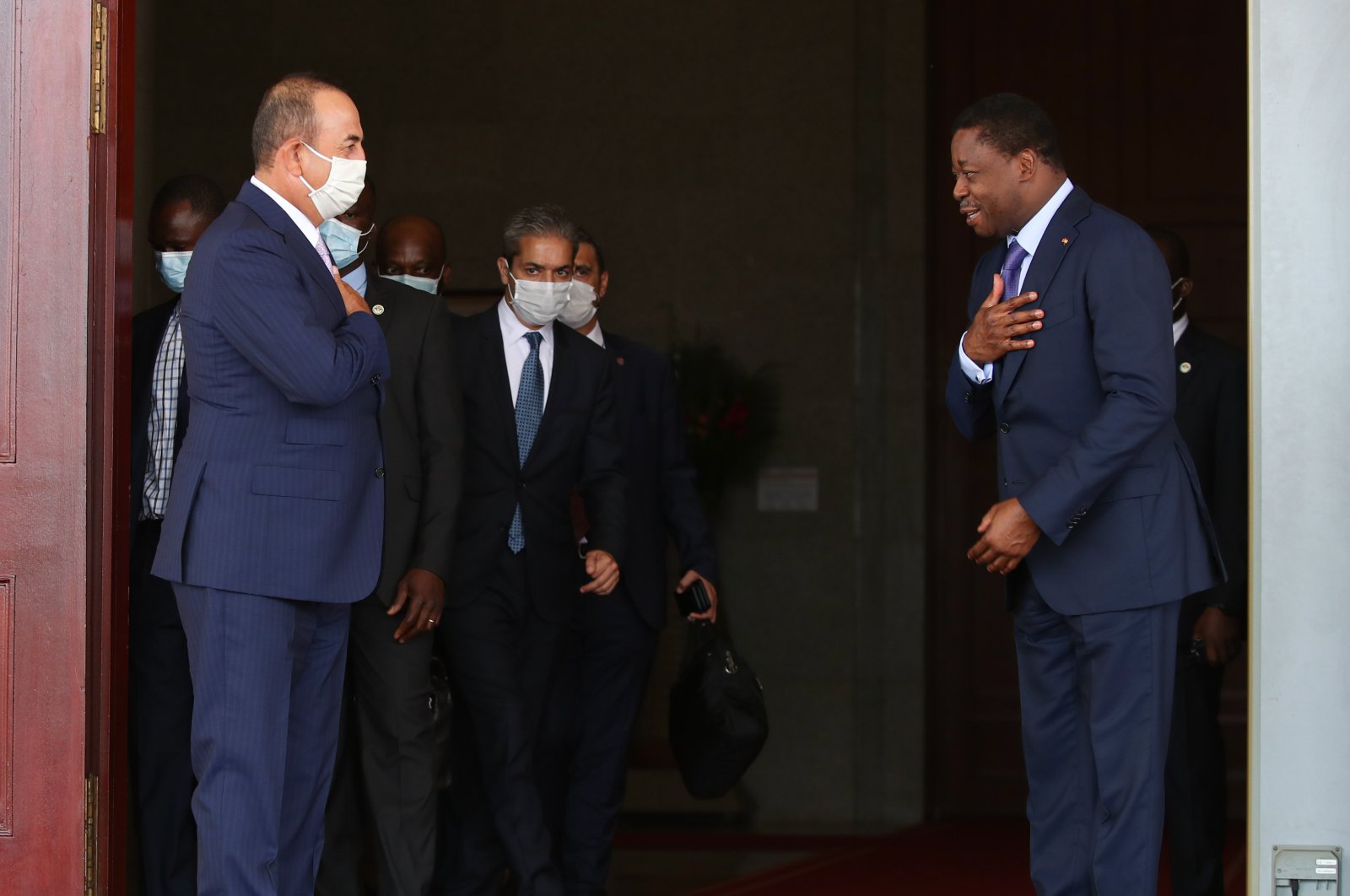 Turkey is determined to strengthen its cooperation with African countries and regional organizations on the continent, Foreign Minister Mevlüt Çavuşoğlu said Monday during his visit to the West African country of Togo.

In a joint news conference alongside his Togolese counterpart Robert Dussey in the capital Lome, Çavuşoğlu referenced Turkey's diplomatic push in Africa over the last decade, saying Ankara more than tripled its number of embassies on the continent from 12 in 2009 to 42.

Along these lines, Ankara will open an embassy in Lome, he added.

On trade between the two countries, Çavuşoğlu said the government will encourage Turkish corporations to expand their activities in Togo.

He also pointed to schools in Togo linked to the Gülenist Terror Group (FETÖ), the group responsible for the defeated 2016 coup in Turkey. Çavuşoğlu said he appreciates Lome handing over these schools to the Maarif Foundation, a group Ankara set up in 2016 to replace the administration of former FETÖ schools.

He said the Maarif Foundation has 333 schools in 43 countries and that with the schools' handover, the quality of education in Togo will rise. He also said that Ankara will continue to give scholarships to Togolese students to study in Turkey.

Çavuşoğlu stressed that the FETÖ terror group is not only a threat to Turkey but also poses a danger to every country where its members live. It also has a considerable presence outside Turkey, including private schools that serve as a revenue stream for the terror group.

FETÖ and its U.S.-based leader Fetullah Gülen orchestrated the defeated coup in Turkey, which killed 251 people and injured nearly 2,200.

Highlighting the ties between the two countries, Çavuşoğlu said Turkey and the Turkish Cooperation and Coordination Agency (TIKA) will continue to support Togo's fight against the pandemic by sending the country needed humanitarian aid.

"Even today, we had the opportunity to bring medical supplies as the symbol of our solidarity," he said.

Dussey thanked Çavuşoğlu for being the first Turkish foreign minister to visit his country.

He also said he hopes that after the pandemic, Turkey's flag carrier Turkish Airlines (THY) will start direct flights to Lome.

He also said Lome has fulfilled its commitments to Ankara in the fight against FETÖ and will complete the necessary work as soon as possible to hand over the schools to the Turkish foundation.

Before the news conference, Çavuşoğlu and Dussey signed three agreements on establishing a political consultation mechanism, visa exemption for diplomatic passports and cooperation among diplomacy academies.

Çavuşoğlu arrived in Togo Monday as the first stop on a three-nation West African tour, to be followed by Niger and Equatorial Guinea.

Under Erdoğan's leadership, Turkey has pursued unprecedented outreach to Africa based on the principle of win-win.

Turkey's opening up to Africa, which dates back to an action plan adopted in 1998, took shape in 2005, which was declared the “Year of Africa” by Ankara. Turkey was accorded observer status by the African Union (AU) the same year. In a reciprocal move, the AU declared Turkey its strategic partner in 2008, and relations between Africa and Turkey gained momentum when the first Turkey-Africa Cooperation Summit was held that year in the Turkish commercial capital Istanbul with the participation of representatives from 50 African countries.

As part of the country's cooperation with Africa, Ankara has donated millions of dollars for infrastructure development on the continent and sponsored hundreds of African students. Turkey's presence is felt across the continent, where a number of Turkish organizations, including TIKA, the Maarif Foundation and the Yunus Emre Institute, operate.

Turkish Airlines has flights to 60 destinations in 39 African countries, TIKA has nearly 30 coordination centers on the continent and the Foreign Economic Relations Board (DEIK) has joint business councils with more than half of Africa's nations.