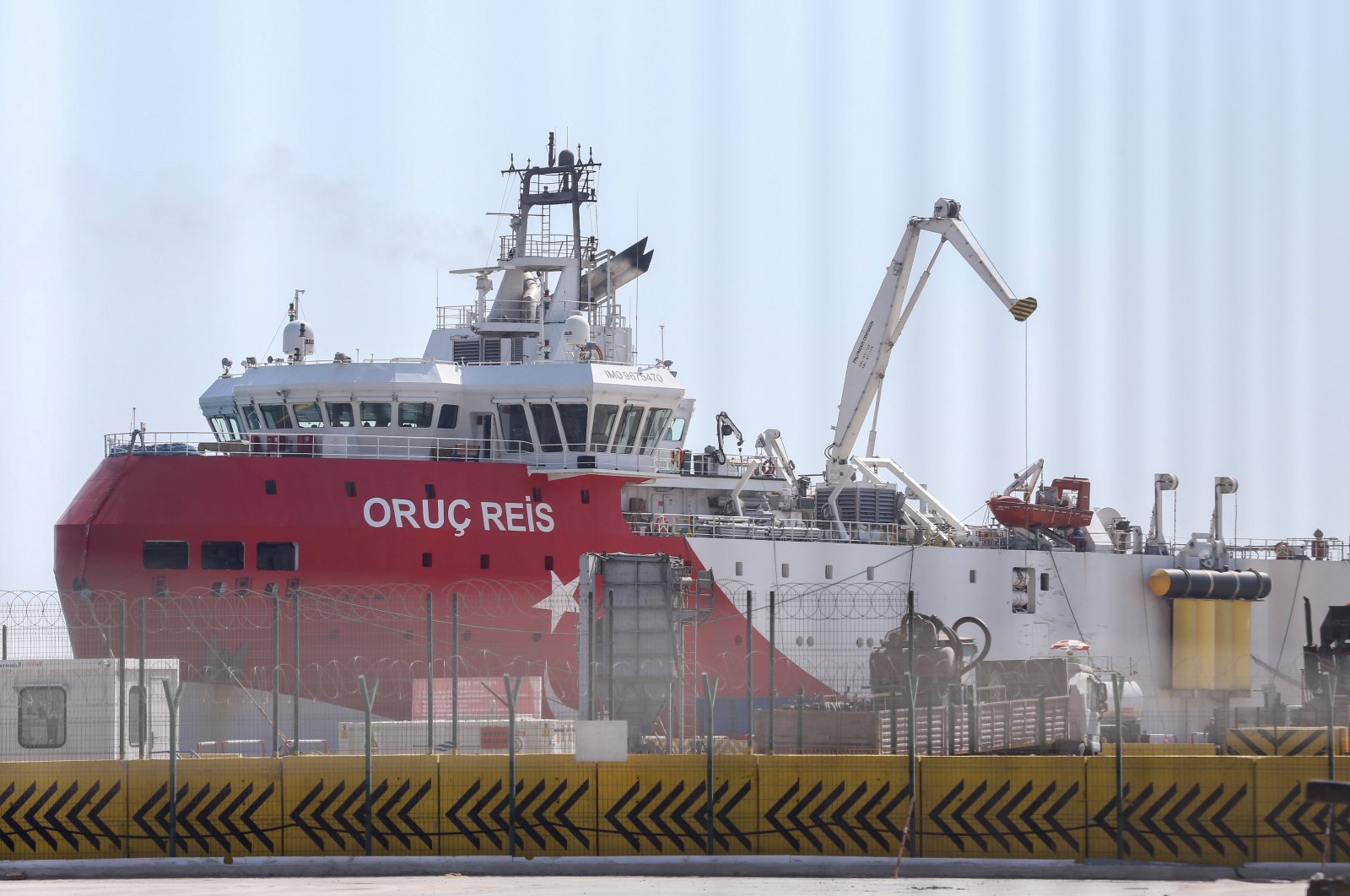 Turkey's seismic research vessel Oruç Reis was recalled to the port of Antalya for restocking and maintenance, Sept. 16, 2020. (AA Photo)
by Daily Sabah with Agencies
Oct 22, 2020 10:32 am

As Turkey has extended the gas exploration mission in the Eastern Mediterranean until Oct. 27, it also rejected the 'baseless' allegations and accusations made against the country in a trilateral meeting between Greece, Egypt and the Greek Cypriot administration

Turkey has extended the gas exploration mission of the Oruç Reis seismic research vessel and two other ships in the Eastern Mediterranean until Oct. 27, according to a new navigational telex (Navtex) announced late Wednesday, while the Foreign Ministry Thursday rejected the “baseless” allegations and accusations made against the country in a trilateral meeting between Greece, Egypt and the Greek Cypriot administration.

Two other vessels, the Ataman and Cengiz Han, along with the Oruç Reis, will continue work in an area southeast of the Greek island of Rhodes until Oct. 27, according to the Navtex. The vessels had previously been scheduled to work until Oct. 22.

NATO members Turkey and Greece are at odds over conflicting claims to hydrocarbon resources in the Eastern Mediterranean and overlapping views on the extent of their continental shelves. Ankara accuses Athens of pursuing maximalist policies in the Eastern Mediterranean and underlines that its maritime claims constituted a violation of Turkey's sovereign rights. Ankara has also said energy resources near the island of Cyprus must be shared fairly between the Turkish Republic of Northern Cyprus (TRNC) and the Greek Cypriot administration.

The Oruç Reis returned to the Turkish port of Antalya in mid-September, after its time at sea – as determined in its latest Navtex declaration – came to an end. The vessel's exploration work was initially scheduled to last until Sept. 1. However, later on, the period was extended until Sept. 12, with the expectation of another extension later, continuing until Sept. 25.

However, many argue that talks between Turkey and Greece initiated by NATO last month are the main reasons behind the vessel's break from work in order to enhance dialogue and ease tension. Still, Turkey highlighted multiple times that the vessel's work will continue after a short break since the country's determination to maintain its rights in the region remains strong.

Oruç Reis’ activities have been relaunched earlier this month after Turkey's Foreign Ministry issued a statement accusing Greece of “insincerity” for what it said was Athens' continued actions to raise tension while declaring itself to be ready for dialogue. Among other things, the ministry accused Greece of declaring military exercises in the Aegean Sea to coincide with Turkey's Oct. 29 national day celebrations. Turkey retaliated by declaring exercises on Oct. 28, the statement said.

The Turkish Foreign Ministry also Thursday rejected the “baseless” allegations and accusations made against Turkey in a trilateral meeting between Greece, Egypt and the Greek Cypriot administration.

In a statement, the ministry said it rejects the memorandum issued after the trilateral summit was held in Greek Cyprus on Wednesday.

It noted that all of the statements issued by the trio; which claim to support peace, stability and cooperation in the Eastern Mediterranean; target Turkey and reveal the true intentions of the trio's leaders.

"The only real cooperation in the Eastern Mediterranean is possible with an inclusive stance that includes Turkish Cypriots and all countries sharing the coast," the ministry said, adding that the countries that create problems in the region cannot provide a solution to the conflict as long as they do not change their maximalist and hostile policies.

"We will continue to protect our rights and the Turkish Cypriots' rights with determination," the statement added.

Mitsotakis said they all agreed that Ankara was "blatantly" violating international law.

“I’ll say it again that in our (partnership) Turkey could also take part, no one excluded it from the start,” Mitsotakis added. “But more often than not, what marginalizes it are its own actions, unfortunately.”

"Turkey's leadership has fantasies of imperial behavior with aggressive behavior from Syria to Libya, Somalia to Cyprus, from the Aegean to the Caucasus," he said.

The EU should also take note of Turkey's "many violations" of the EU-Turkey customs union accord, Mitsotakis said.

"It is not possible for a state, a third state, a country which is a candidate for EU membership, to be exempt from (customs) duties, to reap the benefits of the common market but at the same time threaten the eastern borders of the European Union," he said.

After an EU summit earlier this month, the bloc said it would punish Turkey if it continued operations in the region, in a move Ankara said further strained Turkey-EU ties. Turkey says its operations are within its continental shelf.

“It is a futile effort that third parties try to establish rules that are utterly inconceivable by overstepping their limit and expect them to be accepted,” Turkey's Defense Minister Hulusi Akar Thursday stated.

Reiterating that Kastellorizo (Megisti-Meis) “which is 580 kilometers (360 miles) from Greece and 10 square kilometers (3.86 square miles) big cannot have a maritime zone of 40,000 square kilometers,” Akar stated. “When we say no, we are accused of raising tensions and provocations in a chorus.” He added that Turkey invited its neighbors and other institutions to engage in dialogue.

Akar added that as a guarantor country on the island of Cyprus, Turkey has fulfilled its responsibilities until today and will continue to do so. “The Cyprus issue is our national issue. If a political solution, a suitable atmosphere is desired, then you have to accept the existence of our Cypriot brothers,” he stressed.