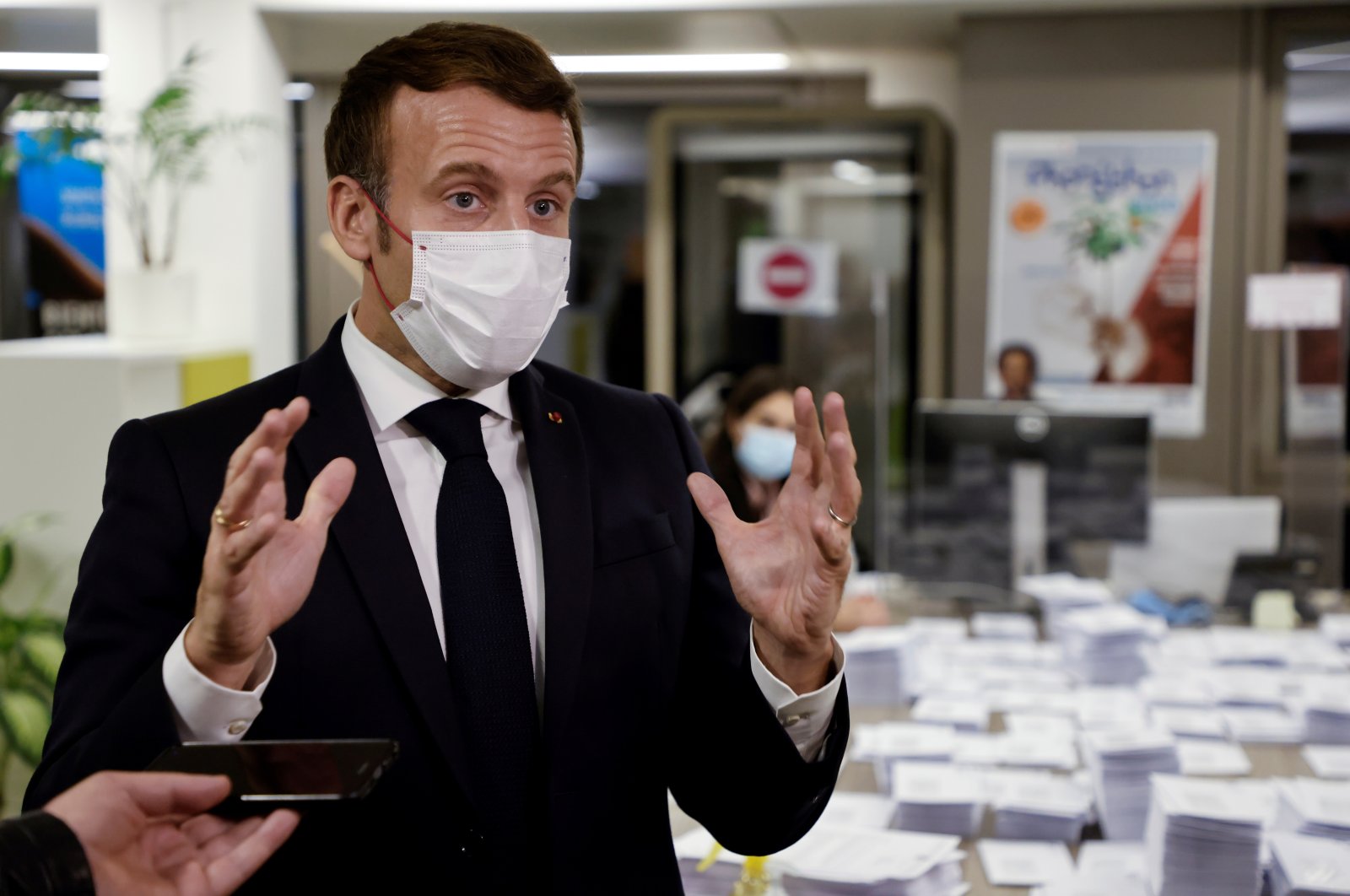 French President Emmanuel Macron speaks during a visit to the 2020 Phoneton, an annual fundraising operation organized by the Hayastan All-Armenian Fund's French affiliate (Fonds Armenien de France) for the development of Armenia and Nagorno-Karabakh, in Paris, France, Nov. 21, 2020. (REUTERS Photo)
by DAILY SABAH
Nov 26, 2020 10:54 am

France's adoption of a resolution to recognize the independence of the Nagorno-Karabakh region drew heavy criticism from both Ankara and Baku for ignoring international law as well as U.N. decisions

The French Senate's adoption of a resolution urging the government to recognize Nagorno-Karabakh as an independent republic shows how biased France is toward the dispute, the Turkish Foreign Ministry stated on Thursday, adding that the resolution is devoid of any reality.

“This decision of the French Senate is a clear indicator of why the (Organization for Security and Co-operation in Europe) OSCE Minsk Group, led by co-chairs that have to be impartial, has provided no solution while being biased,” the ministry said in a written statement.

It is exemplary in how the most basic principles of international law, legitimacy and rightfulness can be ignored for the sake of internal affairs considerations, it added.

Fresh clashes erupted on Sept. 27 continuing for 44 days, throughout which Baku liberated several cities and nearly 300 of its settlements and villages from the Armenian occupation.

“The result Azerbaijan has gained on the field is the concretization of rights that were reflected on U.N. decisions and recorded in the Minsk process of which France is a co-chair but were not put into effect,” the statement said, reminding that multiple U.N. resolutions, as well as many international organizations, demanded the withdrawal of the invading Armenian forces from the region.

The ministry further stressed that the calls by the French Senate for Azerbaijan to withdraw from its territories it liberated from occupation, considering the situation, was “ridiculous, biased and devoid of any reality.”

“This decision, devoid of common sense and which cannot be justified with any sensible explanation, is limiting France’s chance to contribute to the solution of the issue in a real manner,” it added.

The symbolic resolution does not mean the French government will recognize a sovereign Nagorno-Karabakh but sends a message of support to France’s large Armenian community. No country recognizes the region – which Armenia and Azerbaijan have been at odds over for decades – as independent.

“We completely reject the unfounded claims on Turkey mentioned in the decision,” the ministry continued, adding that the reflection of a “Turkey obsession, which is seen quite often recently, is not surprising yet thought-provoking.”

The ministry stated that it hoped France would adopt a more constructive attitude toward the conflict following almost 30 years and would engage in efforts for a permanent solution in accordance with international law.

“Turkey is ready to work with France as with other partners to provide a sustainable solution to the conflict which would also contribute to regional peace and stability,” it said.

Reiterating that France is expected to be neutral as a co-chair of the Minsk Group, Defense Minister Hulusi Akar told Anadolu Agency (AA) on Thursday that this decision proved that Paris is "part of the problem in Nagorno-Karabakh rather than the solution."

This is not the first time that the French Senate has adopted an anti-Turkey decision. It last year adopted a resolution condemning the anti-terror Operation Peace Spring. In 2016, it also adopted an amendment that bans the denial of the so-called Armenian genocide.

Azerbaijan has repeatedly criticized France for supporting Armenia in the dispute. Following the French Senate’s decision, Baku stated that the resolution is “biased and provocative.”

"First of all, we would like to note that the proposal for a resolution on 'The need to recognize the Nagorno-Karabakh Republic' adopted by the French Senate was put forward by a group of overtly pro-Armenian senators," Azerbaijan's Foreign Ministry said in a statement late Wednesday.

The ministry said French Armenians used the Nagorno-Karabakh conflict for election purposes, adding: "The adoption of a completely biased resolution by the Senate can only be considered as a provocation."

Although the resolution adopted by the Senate is not legally binding, the ministry said, it "casts doubt on the neutrality" of the country with a mediating role.

"It also undermines France's reputation as a fair mediator in the Azerbaijani society," it added.

"Instead of adopting biased resolutions, engagement of the French Senate in activities that serve peace, stability and progress in the region would align better with the interests of France and lead to a sustainable development in the region," the ministry urged.

Separately, Azerbaijan's parliament on Thursday called for France to be stripped of its mediation role in the Nagorno-Karabakh conflict to punish the French Senate for adopting a resolution backing the region's independence.

The Azerbaijani parliament urged its government to review ties with Paris and to appeal to the OSCE to revoke France's role as a co-chair.

Armenian Prime Minister Nikol Pashinian praised the resolution, describing it in a tweet late Wednesday as an act showing France's attachment to "universal values, as well as to respect the fundamental principles of international law."