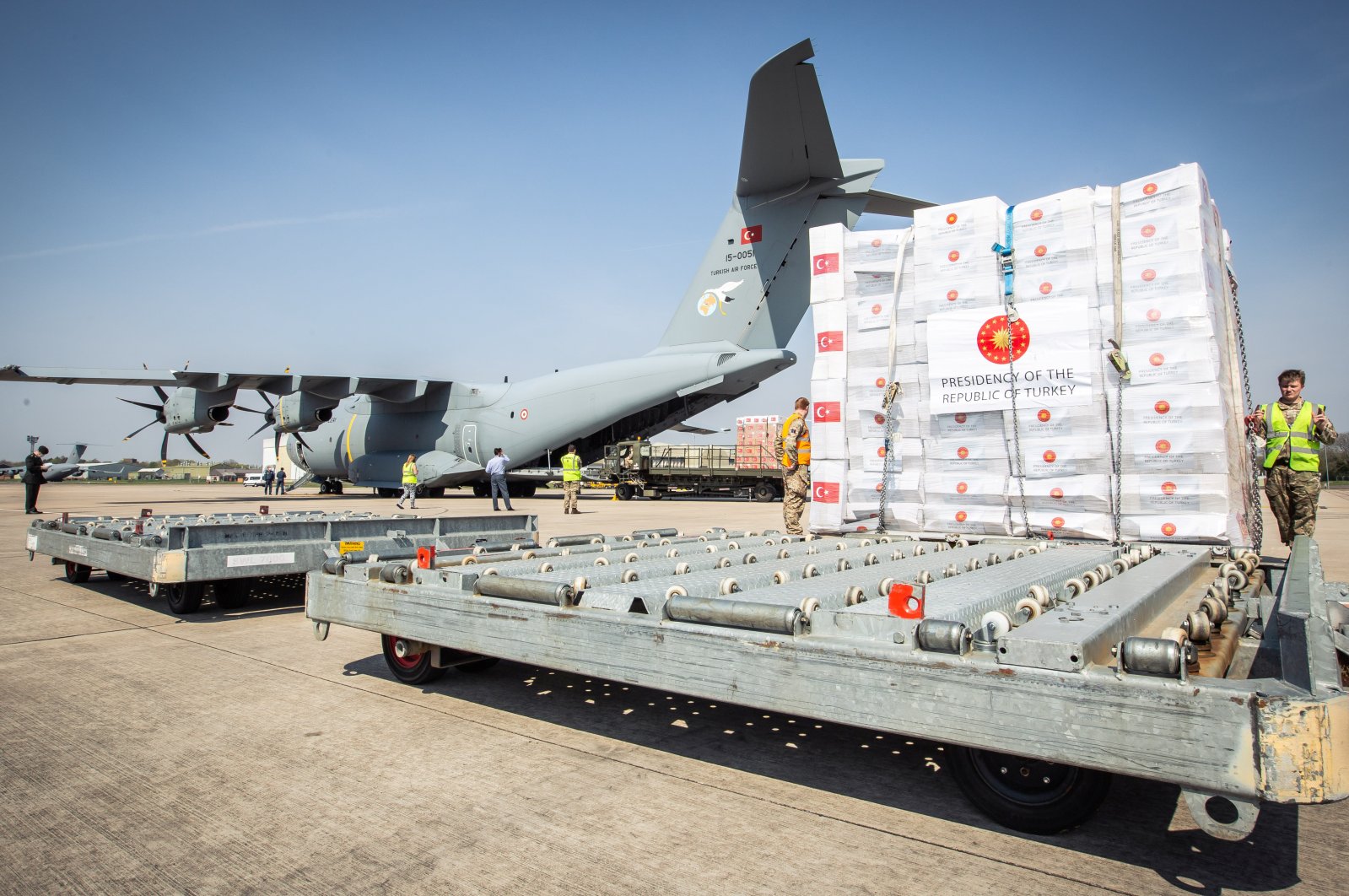 Crucial supplies of personal protective equipment (PPE) for medical staff are delivered from Turkey into a Royal Air Force base for distribution around the country, amid the coronavirus disease, in Carterton, Britain, April 10, 2020. (REUTERS)
by DAILY SABAH WITH AGENCIES Apr 23, 2020 12:31 pm
RECOMMENDED

The COVID-19 pandemic introduced a new layer to bilateral ties, causing countries such as Turkey to escalate diplomatic efforts with nations all over the world and putting an emphasis on cooperation and determination in the fight against the outbreak.

Wednesday alone witnessed a series of phone calls between Turkish authorities and various other world leaders with more than five interactions in a single day.

The defense ministers of Turkey and Britain discussed their cooperation in combatting the novel coronavirus on Wednesday.

Turkey's National Defense Ministry said in a statement that Hulusi Akar and his British counterpart Ben Wallace addressed "the importance of cooperation and solidarity in the fight against COVID-19, bilateral and regional developments and defense industry cooperation." The conversation came after a cargo plane carrying medical equipment from Turkey reached the U.K. early Wednesday.

Previously, U.K. Foreign Secretary Dominic Raab thanked Turkey on April 9 for sending medical supplies to help the country combat the coronavirus pandemic, according to diplomatic sources. Raab spoke on the phone to Foreign Minister Mevlüt Çavuşoğlu and said the supplies were an "indication of a strong friendship between the two countries."

Health workers have complained about the lack of medical equipment in the U.K. and criticized the government as various health officials have died because of COVID-19.

Turkey sent N95 masks and protective suits to the virus-hit country more than once over the past few weeks, accompanied by a message to residents in the U.K. of a quote by Sufi mystic Rumi: "After hopelessness, there is much hope, and after darkness, there is the much brighter sun."

President Recep Tayyip Erdoğan, on the other hand, on Wednesday spoke to Italian Prime Minister Giuseppe Conte over the phone. The Presidential Communications Directorate said in a statement that Erdoğan and Conte discussed cooperation in fighting COVID-19, bilateral relations and regional developments.

After Turkish military aircraft carrying medical aid departed from the capital Ankara at the beginning of the month for Italy and Spain, Italian Foreign Minister Luigi Di Maio also thanked Turkey for helping his country combat the coronavirus.

The minister, Italian Chief of General Staff Gen. Enzo Vecciarelli and Turkish Ambassador to Rome Murat Salim Esenli greeted the cargo aircraft when it landed at Practica di Mare Air Base near Rome.

"Today's help is very important to us. We thank President Erdoğan, Foreign Minister Çavuşoğlu and all Turkish people for their solidarity," Di Maio said, noting that the country needs 100 million masks a month.

Earlier in the day, Erdoğan also had phone talks separately with his Iranian and Uzbek counterparts.

The Directorate of Communications said Erdoğan and his Uzbek counterpart, Shavkat Mirziyoyev, exchanged views on issues ranging from the global fight against the coronavirus pandemic to bilateral relations and regional developments.

Currently, there are 1,716 confirmed coronavirus cases in Uzbekistan with only seven deaths so far.

Iran is one of the countries hardest hit by the virus with almost 86,000 confirmed cases and more than 5,300 deaths.

There are only 84 confirmed coronavirus cases in Equatorial Guinea with one death so far.

"I thank President Recep Tayyip Erdoğan of Turkey for the valuable phone conversation. I expressed my gratitude to @RTErdogan on our nation's behalf for Turkey's generous support to the people of Somalia against #COVID19," he said in a brief statement on Twitter.

On April 17, a military cargo plane carrying medical supplies from Turkey landed in the capital Mogadishu. The supplies were handed over to the Somali Health Ministry.

On Tuesday, Somalia announced that six people had died from the coronavirus and 49 more people had tested positive for COVID-19, bringing the total number of cases in the country to 286.

Turkey, as a country that has made a name for itself in the last decade for its humanitarian efforts, has already gained prominence by sending medical aid packages to many nations across the world.

"So far, we have delivered medical equipment to 34 countries," President Erdoğan said last week during a news conference following a Cabinet meeting in Istanbul. "We will continue our support (to other countries) in the upcoming days as well," he said. The number has escalated since then.

Erdoğan's speech was an evaluation of the past month, during which Turkey has received aid requests from more than 90 countries. Managing to deliver medical equipment to almost 40 of them so far, the country has provided consultancy to many others, aiming to share its resources and experiences with the world in a period of crisis. Turkey's aid packages mostly include medical masks, protective overalls and gloves, as well as disinfectants. All equipment was produced at military-owned factories and at sewing workshops that produce military uniforms and other clothing for the army.

The novel coronavirus has spread to 185 countries and regions since emerging in China last December, with the U.S. and Europe being the hardest-hit areas in the world.

More than 2.61 million cases have been reported worldwide. The death toll has exceeded 181,200 while the number of recoveries is over 703,500, according to data compiled by the U.S.-based Johns Hopkins University.

These efforts of Turkey are considered by many as beneficial moves for the country's bilateral ties, especially with the EU, despite shaky relations over the years.

Despite political obstacles, dialogue between Turkey and the EU has benefited amid the mutual fight against the novel coronavirus pandemic, a senior Turkish diplomat said Wednesday.

Speaking via webinar in a program titled "European Union and Turkey-EU Relations in the COVID-19 process," Turkish Deputy Foreign Minister and Director for EU Affairs Faruk Kaymakçı said: "COVID-19 has led to an increase in dialogue that was blocked politically between the EU and Turkey. We hope we can get more effective results."

Kaymakçı noted that a donors' conference would be held on May 4 on the development of a vaccine and treatment, adding that European Commission President Ursula von der Leyen could hold a phone call "in the coming days" with Erdoğan to request that Turkey "take an active role in this conference."

On the initial response of some EU members to the outbreak, he said that "many countries could not predict that the crisis could reach this point." When the pandemic crisis started in Europe, EU countries started taking precautions against each other without consulting the EU, said Kaymaçı.

Additionally, he underlined that as part of the measures against the pandemic, 32,000 Turkish nationals had been brought home from 76 countries so far. "We are not only bringing our citizens to Turkey but also helping citizens of other countries in Turkey return to their countries," Kaymakçı said. Around 175,000 foreign citizens have left Turkey so far, he added.

Turkey applied for EU membership in 1987 and its accession talks began in 2005. Negotiations stalled in 2007 due to the objections of the Greek Cypriot administration, as well as opposition from Germany and France. The EU decided in 2018 that no new chapters in Turkey's accession talks would be opened or closed.

Turkey has been preparing a new initiative to accelerate the accession process to the European Union. Accordingly, Turkey will complete regulations for six more chapters, including the fight against terrorism. Relations between Turkey and the EU entered a complicated period due to the EU's negative stance toward Turkey following the July 2016 failed coup. Emergency measures taken by Turkey following the coup attempt drew criticism from the EU.

Still, Ankara and Brussels signed an agreement in 2016 to find a solution to the influx of refugees heading to the union. Despite significant developments in the control of migration traffic, the EU could not deliver on its commitments stated in the deal.