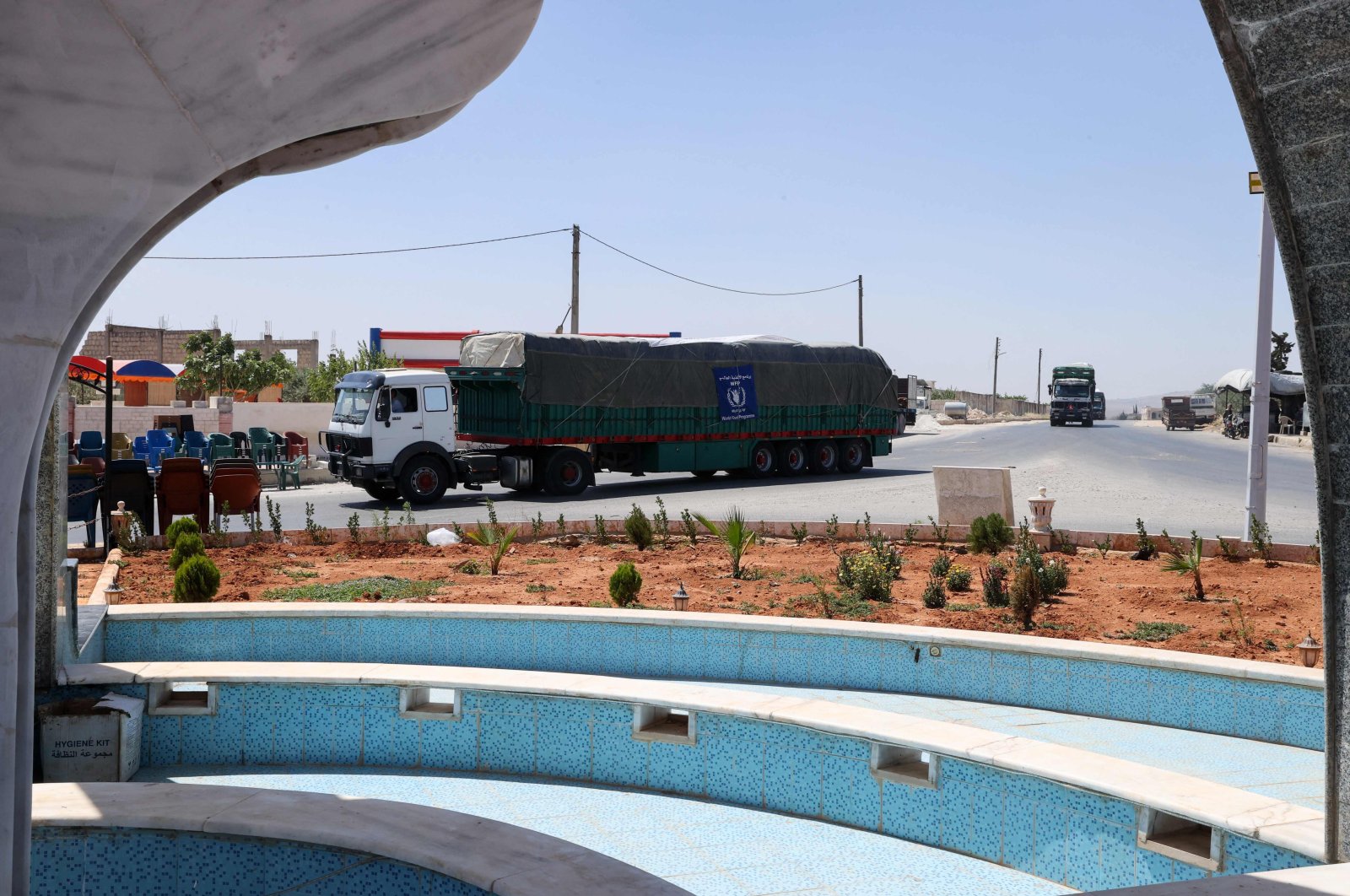 Trucks carrying aid from the World Food Programme (WFP) drive through the town of Saraqib in northwestern Idlib province, Syria, June 12, 2022. (AFP Photo)
by Daily Sabah with Agencies Jun 16, 2022 10:34 am

The last remaining border crossing into Syria’s northwest must not be closed, Turkey, Ireland and Norway emphasized as Ankara, on the other side, attended the 18th Astana meeting for a political solution in the war-torn country

The top diplomats of Turkey, Ireland and Norway on Wednesday called for the renewal of a United Nations mandate enabling aid into northwestern Syria that is about to expire.

Russia’s deputy ambassador to the United Nations has told the Security Council that Moscow sees no reason to continue humanitarian aid deliveries through the Bab al-Hawa border gate. He accused the West and the U.N. of insufficient efforts to deliver such aid from Damascus, the Syrian capital. The U.N. Security Council is scheduled to vote on July 10 on whether to continue authorizing cross-border aid from Turkey.

Ireland and Norway, two nonpermanent members of the Security Council, have been working together to keep the Bab al-Hawa crossing open. Their foreign ministers visited the border area on Wednesday before holding talks with Foreign Minister Mevlüt Çavuşoğlu in Ankara.

Norwegian Foreign Minister Anniken Huitfeldt told reporters during a joint news conference that 4 million Syrians were in need of the humanitarian aid that passes through the border, warning that the situation in Syria was going from “bad to worse.”

"Four million Syrians depend on food, water and medicine and other humanitarian supplies transported across the border from Turkey," she said, adding that "tremendous efforts" are being carried out by Ankara, the U.N. and the humanitarian organization in the area.

Çavuşoğlu said he discussed the aid deliveries with Russian Foreign Minister Sergey Lavrov during their talks in Ankara last week.

“We will continue our efforts to persuade the Russian side in the coming period,” he said.

In early July 2020, China and Russia vetoed a U.N. resolution that would have maintained two border crossing points from Turkey to deliver humanitarian aid to Syria’s Idlib province. Days later, the council authorized the delivery of aid through just one of those crossings, Bab al-Hawa. That one-year mandate was extended for a year on July 9, 2021.

Observers say Russia is using the threat of closure of the aid entry point as a bargaining chip in the face of punishing European Union and U.S. sanctions over Moscow's invasion of Ukraine.

But aid groups have been reluctant to shift their massive operations to go through areas held by the regime of Bashar Assad, itself subject to sanctions.

Nearly 10,000 trucks loaded with humanitarian aid passed through the Bab al-Hawa crossing last year bound for the Idlib region, the last opposition bastion in Syria and home to around 3 million people.

Çavuşoğlu said that around 4.4 million people lived in the war-torn country's northwest, with 4.1 million in need of humanitarian aid, up from 3.4 million last year.

Some 800 truckloads of international aid are being delivered monthly through the Cilvegözü Border Gate from southern Hatay province, opposite the Bab al-Hawa border crossing on the Syrian side, said Çavuşoğlu.

Meanwhile, Russia, Turkey, and Iran have agreed to make further efforts to ensure calm in Syria's Idlib de-escalation area, the three countries said on Thursday in a joint statement after talks in Kazakhstan.

According to the joint statement released by the ministry, the leaders discussed the situation on the ground, counterterrorism, and the latest developments in the political process and humanitarian aid issues at the meeting.

"The Parties underlined their strong commitment to Syria's political unity and territorial integrity and the leading role of the Astana process in the peaceful settlement of the Syrian issue," it said, adding that they expressed their determination against the separatist agendas that pose a threat to the national security of neighboring countries, including through cross-border attacks and infiltrations.

“The Parties underlined their strong commitment to Syria's political unity and territorial integrity and the leading role of the Astana process in the peaceful settlement of the Syrian issue,” it said, adding that they expressed their determination against the separatist agendas that pose threat to the national security of neighboring countries, including through cross-border attacks and infiltrations.

“The Parties condemned the increased presence and activities of terrorist groups and their affiliates under different names in Syria. They highlighted the necessity to implement all arrangements related to the north of Syria.”

It added that Turkey, Iran and Russia expressed grave concern “with increasing hostilities and all forms of oppression by the separatist groups against civilians in the east of Euphrates, including through suppression of peaceful demonstrations, forced conscription and discriminatory practices in the field of education.”

"In this context, our determination in combatting against PKK/YPG terrorist organization as well as in taking every measure to protect our borders, to prevent attacks against our people, our security forces and innocent Syrian civilians was emphasized," the statement added.

They also reiterated commitments to achieving progress in the process of the political settlement of the Syrian conflict in line with the U.N. Security Council Resolution 2254. The 18th Astana meeting began Wednesday in the Kazakh capital of Nur-Sultan to discuss conditions for the safe return of Syrian refugees and the humanitarian and socio-economic situation in Syria.

The gathering tackled the work of the Constitutional Committee in Geneva, confidence-building measures, the release of hostages and the search for missing persons.

The Astana process initiated under the leadership of Turkey and Russia to bring a cease-fire and conflict processes under control in Syria continues to be operated as a platform where political and humanitarian issues are discussed.

The peace process was launched in January 2017 at the initiative of Turkey, Russia and Iran. Its meetings also contribute to the advancement of a U.N.-led diplomatic process in Geneva.