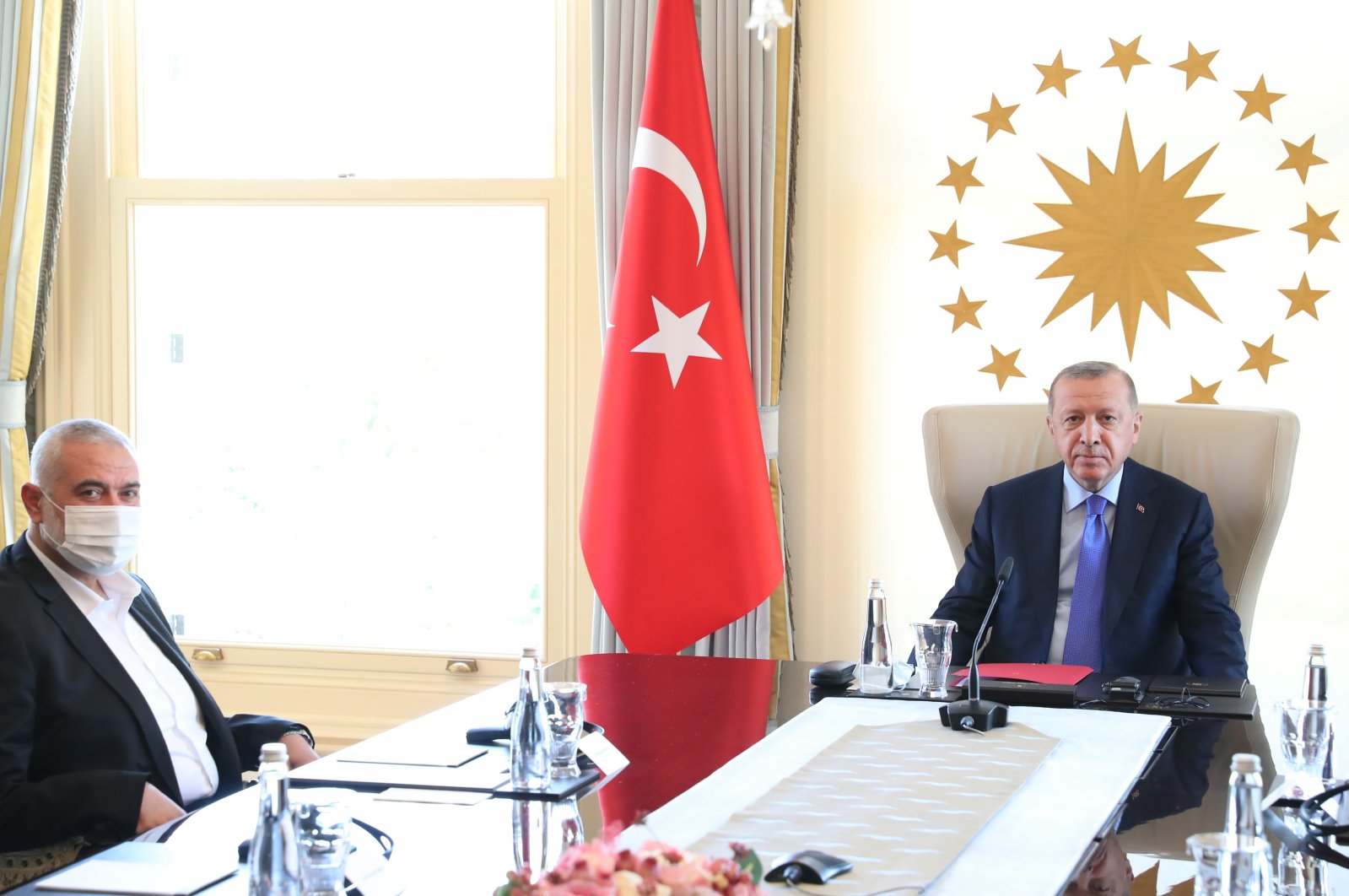 Following U.S. objections, Turkey on Tuesday defended this week's meeting between President Recep Tayyip Erdoğan and members of Hamas on the basis that the latter constitutes a democratically elected actor representing the reality of the region.

The Turkish Foreign Ministry said Ankara has fully rejected a U.S. statement that crossed the line, adding that designating Hamas representatives terrorists would not contribute to regional peace or stability.

"Declaring the legitimate representative of Hamas, who came to power after winning democratic elections in Gaza and constitute an important reality in the region, as a terrorist, will not be of any contribution to efforts for peace and stability in the region," the ministry's statement said.

Accusing the U.S. administration of openly supporting the terrorist YPG/PKK and hosting the ringleader of the Gülenist Terror Group (FETÖ), which was behind the 2016 defeated coup in Turkey, the ministry said the U.S. had no right to comment on third countries' politics.

In its more than 40-year terror campaign against Turkey, the PKK – listed as a terrorist organization by Turkey, the U.S. and European Union – has been responsible for the deaths of nearly 40,000 people, including women, children, and infants.

The U.S. has allied itself with the YPG, the PKK's Syrian branch, as a supposed ally against the Daesh terror group in Syria.

FETÖ and its U.S.-based leader Fetullah Gülen orchestrated the defeated coup on July 15, 2016, which left 251 people killed and nearly 2,200 injured. Despite years of requests from Turkey, the U.S. has failed to extradite Gülen.

The ministry's statement added that after the U.S. administration designated Hamas a terrorist group, it closed the Palestine Liberation Organization (PLO) mission in Washington, thereby cutting ties with the Palestinian Authority and isolating itself from regional realities.

It called on the U.S. to use its regional influence and power to not serve the interests of Israel but to follow more balanced policies in a bid to bring an equitable and fair solution to the Palestinian-Israeli conflict.

Washington said Tuesday it strongly objected to Erdoğan's recent hosting of two leaders of Hamas in Istanbul. Ismail Haniyeh, the political head of Hamas, and a delegation paid a visit to Turkey over the weekend and met with President Erdoğan in Istanbul Saturday.

The State Department said the officials were "Specially Designated Global Terrorists" and that the U.S. was seeking information on one for his involvement in multiple terrorist attacks, hijackings and kidnappings.

The State Department said the Saturday meeting was the second time this year Erdoğan had welcomed leaders of the group that has controlled Gaza for over a decade, after a meeting on Feb. 1.

"President Erdoğan's continuing to reach out to this terrorist organization only serves to isolate Turkey from the international community, harms the interests of the Palestinian people, and undercuts global efforts to prevent terrorist attacks launched from Gaza," it said in a statement.

"We continue to raise our concerns about the Turkish government's relationship with Hamas at the highest levels," it added.

"I have to say that, to me, President Erdoğan was very good," Trump told Brunson in a meeting with Americans freed from overseas captivity aired on the first night of the Republican National Convention on Monday.

"And I know they had you scheduled for a long time, and you were a very innocent person, and he, ultimately, after we had a few conversations, he agreed. So we appreciate that, and we appreciate the people of Turkey," Trump said.