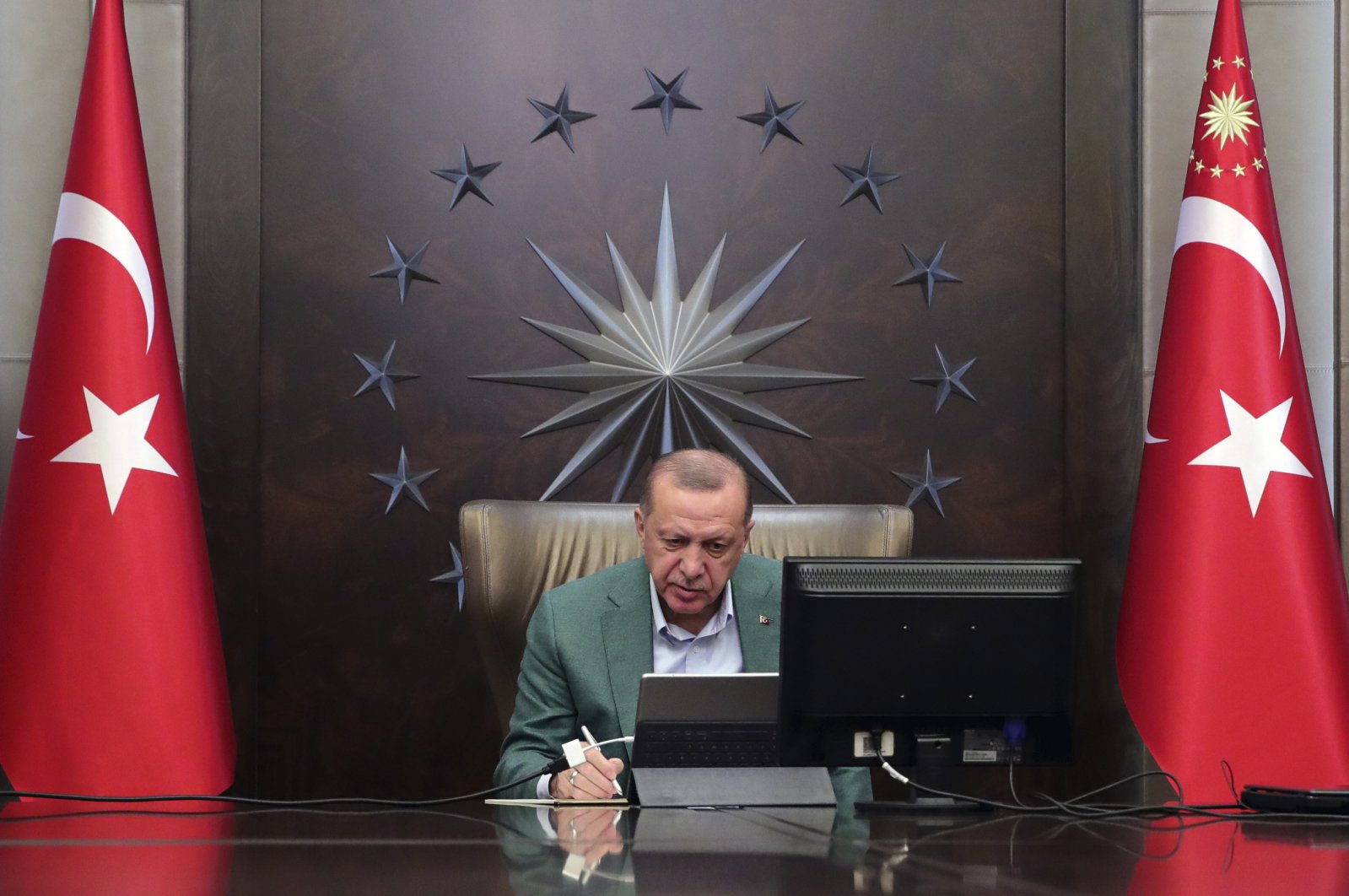 President Recep Tayyip Erdoğan participates in a teleconference with his ministers amid the coronavirus outbreak, in capital Ankara, Monday, March 23, 2020. (AP Photo)
by Daily Sabah with AA Mar 25, 2020 11:53 am
RECOMMENDED

As the whole world is struggling against one of the most threatening pandemics in modern history, Turkey has been using diplomatic initiatives to create common responses to the global coronavirus outbreak.

"President (Recep Tayyip) Erdoğan is conducting meetings with world leaders to come up with diplomatic initiatives to create common responses to this global threat," Presidential Communications Director Fahrettin Altun said late Tuesday on Twitter while explaining how the president is closely monitoring the issue.

Erdoğan conducted teleconferences with cabinet members and other relevant agencies to receive updates and give related orders, Altun said.

Stressing that countries have a lot to learn from each other, Altun said common measures if implemented well can help stem the spread of the virus.

Regarding the seven latest deaths in Turkey from the coronavirus, he said the government took the threat seriously and implemented strict health precautions while ensuring the stability of the economy.

He also thanked all medical personnel and security forces for their sacrifices.

After emerging in Wuhan, China last December, the coronavirus SARS-CoV-2, which causes the disease COVID-19, has spread to at least 169 countries and regions, according to data compiled by U.S.-based Johns Hopkins University. The World Health Organization (WHO) has declared the outbreak a pandemic.

In the global common fight against the COVID-19 outbreak, Turkey’s quick and effective response has been welcomed by the international community.

The U.S. ambassador to Ankara Tuesday thanked the Turkish government for its efforts in fighting coronavirus outbreak.

"The Turkish government's response has been swift and thorough, and I want to thank them for that. Turkey's medical professionals, in particular, are heroes," said Ambassador David Satterfield on Twitter.

The pandemic is an unprecedented global challenge that has affected many Americans abroad and has forced American's to contemplate their personal circumstances, Satterfield stressed.

"Ask yourself today, 'Are you ready to ride out an undetermined period of time where you are now, or do you want to return to the U.S.?" he said, calling on citizens to act while flights are still available.

In another statement, Azerbaijan's health minister praised Turkey on Tuesday for helping it obtain test kits for detecting coronavirus cases.

"The tests were brought to Baku as a favor from our brother, Turkey," Ogtay Shiraliyev told state television.

"The first patients were diagnosed with the help of those tests," he added.

Shiraliyev said the initial diagnoses were done in a few laboratories, and the country prevented an increase of virus cases thanks to the measures taken.

Foreign Minister Mevlüt Çavuşoğlu on Wednesday said Turkey has provided medical equipment to 17 countries in response to the COVID-19 pandemic.

Azerbaijan confirmed its first virus case on Feb. 28 in a Russian national coming from Iran.

It confirmed its first death earlier this month.

They also discussed measures that can be taken "with the common benefit principle of humanity," said Health Minister Fahrettin Koca about his talk with Japan's Ambassador to Turkey Akio Miyajima.

"We will share knowledge and experience synergy," Koca added, who received the envoy at the ministry in Ankara.

Japan has 1,140 cases with the death toll standing at 42, according to data compiled by U.S.-based Johns Hopkins University.