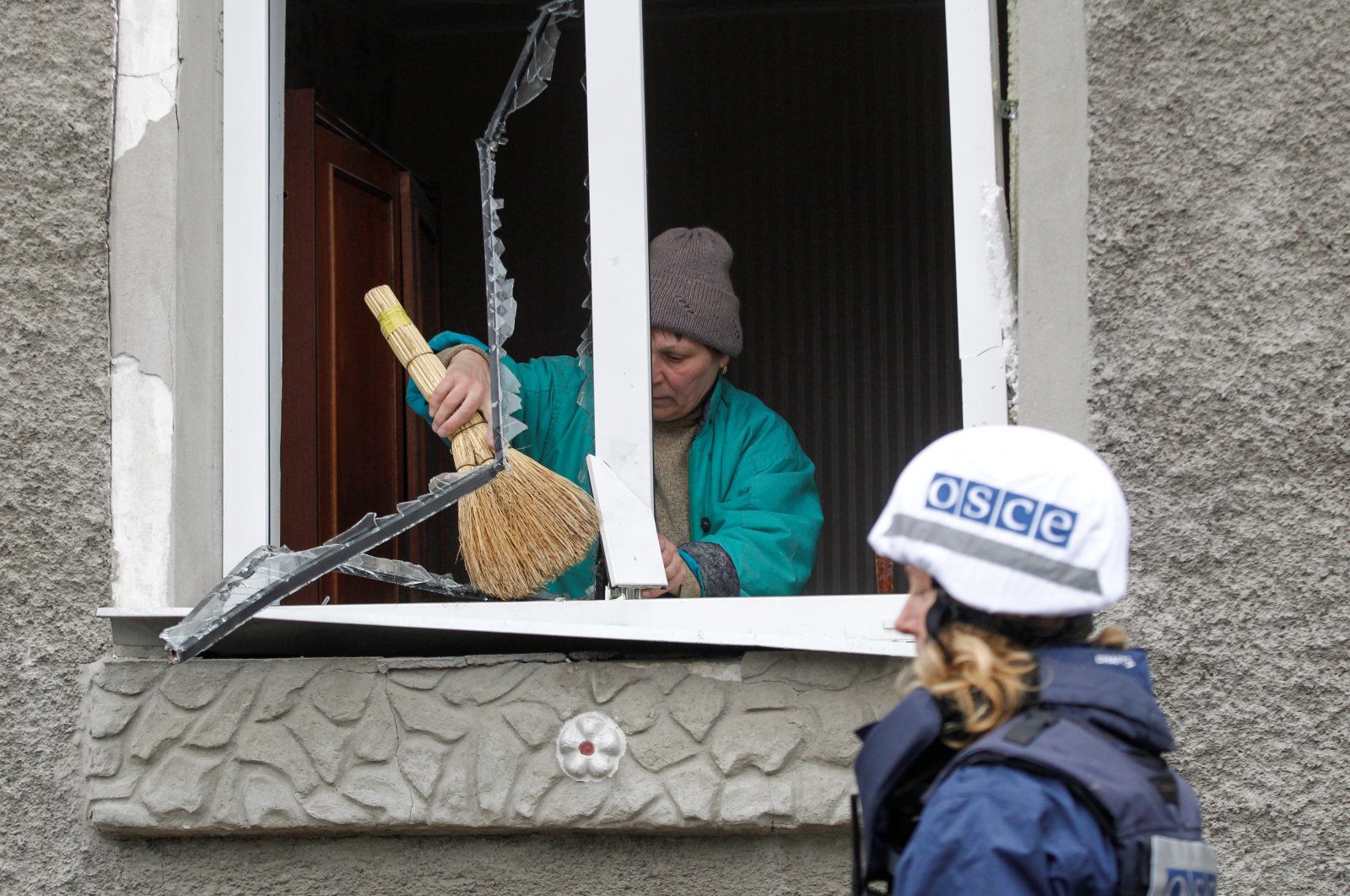 A member of the Organization for Security and Co-operation in Europe (OSCE) walks past a local resident removing debris from inside a house damaged during fighting between the armed forces of Ukraine and the separatist Lugansk People's Republic in the settlement of Holubivske, the Luhansk region, Ukraine, Feb. 19, 2020. (Reuters Photo)
by DAILY SABAH WITH AGENCIES Jul 27, 2020 9:46 am
RECOMMENDED

Turkey has welcomed the consensus within the Organization for Security and Co-operation in Europe (OSCE) on reaching "a comprehensive and lasting” cease-fire on Monday for eastern Ukraine.

"We welcome the agreement reached by the OSCE Trilateral Contact Group on additional strengthening measures to establish a cease-fire in eastern Ukraine as of July 27, 2020," the Foreign Ministry said in a statement late Sunday.

"We expect all relevant parties to act in line with this agreement," the statement added. "Turkey will continue to support efforts aimed at ensuring peace in the region on the basis of preserving the territorial integrity of Ukraine and the implementation of the Minsk agreements," the statement said.

The Minsk agreement, signed in 2015 by the leaders of Ukraine, Russia, France and Germany and overseen by the OSCE, was drafted to stop hostilities in eastern Ukraine.

Moscow and Kyiv have been at loggerheads since 2014, when Russia annexed Ukraine's Crimea Peninsula, a move widely viewed as illegal, including by Turkey and the United Nations General Assembly.

Ukraine also blames the Kremlin for separatist violence in Donbass, in the country's east, near its border with Russia, which has claimed some 13,000 lives.

The two sides said Monday that a full and comprehensive cease-fire between Ukrainian government forces and pro-Russian separatists has entered into force in eastern Ukraine, opening the prospect of an end to military and civilian casualties.

The current deal was backed by Russian President Vladimir Putin and Ukrainian President Volodymyr Zelenskiy, who agreed on "the need for urgent implementation of extra measures to support the cease-fire regime in Donbass."

Zelenskiy has sought to resolve the conflict since his election last year, arranging a number of prisoner swaps.

"We are talking about the possibility of a real cease-fire on both sides," the head of Ukraine's joint forces operation Volodymyr Kravchenko told a televised briefing.

"The situation is stable and controlled," he added.

On Sunday, Ukraine's defense ministry said in a statement that its forces "stand ready to give a proper rebuff to the enemy in case of violation of the agreements."

The separatists also said Monday observers "did not record any violations of the cease-fire by the security forces of Kyiv, starting from 12:01 a.m. on July 27 this year."