Turkey will always stand by people of Mali: FM Çavuşoğlu 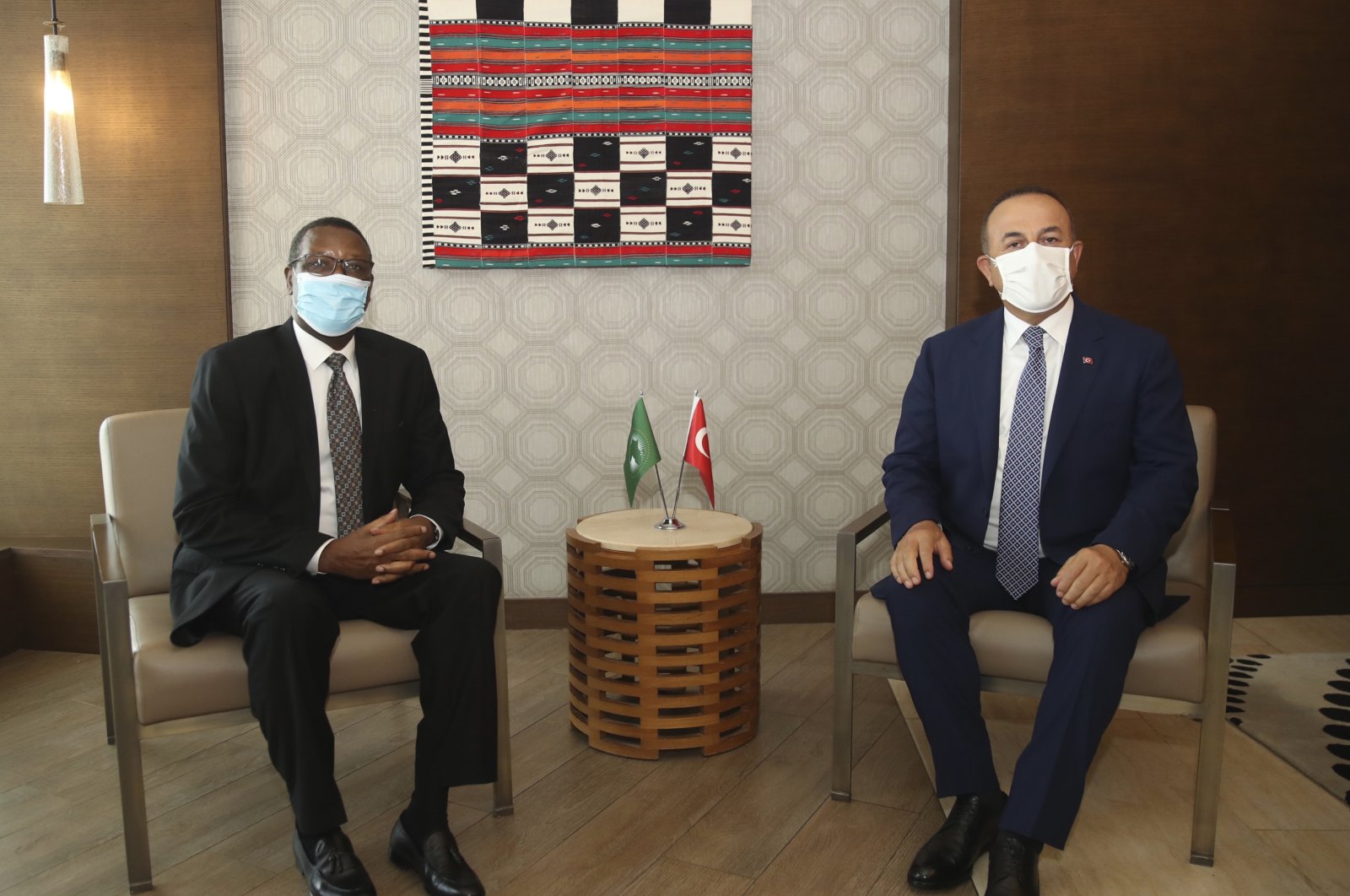 Turkey's Foreign Minister Mevlüt Çavuşoğlu (R) and Pierre Buyoya, high representative of the African Union for Mali and the Sahel, pose for photos before their talks in Bamako, Mali, Sept. 9, 2020. (AP Photo)
by DAILY SABAH WITH AA Sep 10, 2020 10:20 am
RECOMMENDED

Turkey will always stand by the people of Mali for the establishment of constitutional order after the military coup last month in the country, the top Turkish diplomat said Wednesday.

"Mali is a friendly and brotherly country for us. We have always stood by Mali and its brotherly people in difficult days," Mevlüt Çavuşoğlu, who is on an official visit to Bamako, told reporters.

He said Turkey will contribute whatever is necessary toward Mali's cooperation with the international community.

Noting that he particularly wanted to visit Mali during the "difficult period" the country faces now, Çavuşoğlu said he also wanted to express Turkey's solidarity with the people of Mali, adding that Mali has, unfortunately, faced various problems over the years.

He underlined that Mali's stability, security and economic stability is very important for Turkey, West Africa and for the entire continent.

Çavuşoğlu said that during his visit, he met with the members and head of the National Committee for the Salvation of the People, as well as Mahamat Saleh Annadif, the U.N. special representative of the secretary-general for Mali, and Pierre Buyoya, the African Union high representative for Mali.

"We desire Mali to complete the transition process smoothly. It is important for the future of Mali to take the necessary steps to establish a constitutional order and hold democratic elections as soon as possible," he said.

He went on to say that Turkey has supported the U.N.'s Mali mission so far and contributed to its budget this year, adding that two Turkish police officers have also served in the West African country.

Çavuşoğlu stressed that Turkey will continue to support Mali's fight against terrorism as well as its fight against the coronavirus outbreak, adding that Ankara had delivered ventilators and N95 masks to Mali earlier.

A group of army colonels has ruled Mali since ousting President Ibrahim Boubacar Keita on Aug. 18. No consensus has yet been reached on the makeup and duration of a transitional government ahead of promised elections. After the coup, the junta pledged to hold fresh elections and initially proposed a three-year, military-led transition back to civilian rule, before ratcheting it back to two. But the 15-nation West African regional bloc the Economic Community of West African States (ECOWAS) has demanded the transition take place in 12 months – and be led by a civilian president and prime minister.

While the coup has provoked international outrage, it has received support among some in Mali, fatigued by the country's bloodshed and economic struggle. Keita, 75, came to power in 2013 but has been criticized by people who say he has failed to protect them from terrorist attacks mostly in the northern and central parts of the country. Mali, one of the poorest countries in the world, suffers from the presence of several terror groups, despite the French, Malian and U.N. peacekeepers who carry out counterterrorism operations there. Political instability in Mali is seen as a dangerous development for the entire Sahel region, which already faces ongoing threats from numerous terrorist and separatist groups.

Turkey's opening up to Africa, which dates back to the action plan adopted in 1998, took shape in 2005 when it was declared the “Year of Africa” by Ankara and Turkey was accorded observer status by the Africa Union the same year. In a reciprocal move, the African Union declared Turkey its strategic partner in 2008, and relations between Africa and Turkey gained momentum when the first Turkey-Africa Cooperation Summit was held in the commercial capital Istanbul with the participation of representatives from 50 African countries that year. In 2009, there were only 12 Turkish embassies in African countries, with five of them in North Africa. Now, there are 42.