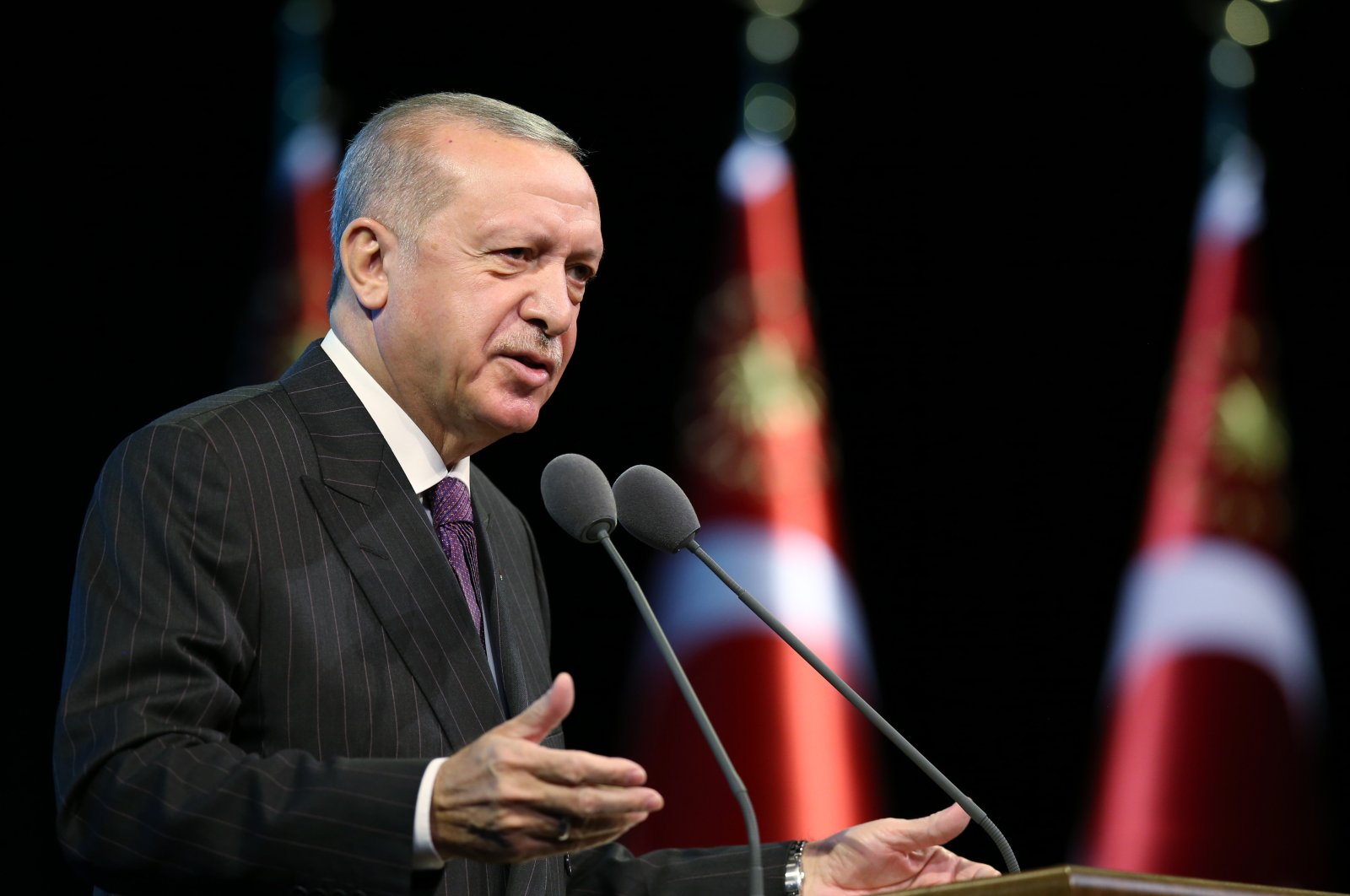 Turkey will not take a step back from its goals in the Eastern Mediterranean, President Recep Tayyip Erdoğan said, as he reiterated Ankara’s determination to also protect the interests of the Turkish Republic of Northern Turkish (TRNC).

“The issue of the Aegean and the Mediterranean is one that Turkey will never take a step back from. We have voiced loudly on all platforms that we will not accept any solution that disregards Turkey and the TRNC and that confines us to the shores, and we will continue to do so,” Erdoğan told the Qatari daily The Peninsula.

The president noted that Turkey has always supported an equitable distribution of resources and will “resolutely” continue to defend its rights.

He added that Greece acknowledged Turkey’s calls for dialogue after realizing that they cannot stop the country’s pursuit in the Eastern Mediterranean despite their “empty threats and blackmail.”

“Turkey has demonstrated loud and clear that it supports reducing the tension and favors dialogue in the Eastern Mediterranean, not just through its statements but also its actions. We have the assurance that we are right in terms of international law,” he said.

Regarding Azerbaijan’s struggle to liberate its territories occupied by Armenia, Erdoğan said Turkey will continue to stand in solidarity with Baku and the Azerbaijani people.

“We will continue to support our Azerbaijani brothers with all our means,” Erdoğan said, as he criticized states and international organizations for failing to take concrete action to solve the deadlock.

“The attitude of these states and institutions caused Armenia to be spoiled and to engage in new occupation activities,” Erdoğan said, as he criticized international indifference to Yerevan’s decadeslong occupation of Azerbaijani territories.

“Azerbaijan’s decision to solve this problem, which has been inconclusive for years and has become unbearable with the soaring attacks of Armenia, with an actual struggle, is a necessity of history, law and the facts of geography,” Erdoğan said, noting that the implementation of U.N. resolutions is also vital to permanently solve the problem.

Calling Armenia the “biggest obstacle to peace, stability and tranquility in the region,” Erdoğan said Yerevan’s attempt to portray Turkey's involvement in the conflict negatively by using “various tricks” following the defeat has proven its despair.

“Even this attitude of Armenia is an indication that it wants to create a wide-scale conflict area in the region,” Erdoğan said, adding that the Nagorno-Karabakh crisis has revealed who is “truly” in favor of peace.

The internationally recognized government will prevail while putschists will lose in Libya, the president said, as he noted that the U.N.’s registration of the Turkey-Libya memorandum on the Eastern Mediterranean has proven that the move was fully in line with international law and established practices.

Criticizing putschist Gen. Khalifa Haftar for waging a “dirty and bloody war” with foreign mercenaries against the legitimate government of Libya, Erdoğan said Haftar has shown that he does not intend to seek a solution.

“He is also a mercenary. Through his uncompromising stance both in Moscow and at the Berlin Conference, he showed the entire world that he had no intention of reaching a cease-fire and a solution,” Erdoğan said, adding that the established order will maintain peace and stability in Libya and the region.

Hailing the strong cooperation between Turkey and Qatar, Erdoğan said the two countries have deep-rooted historical, cultural and political ties, which have become stronger as a result of the joint efforts of the two countries since 1972.

“Turkey’s military presence serves the stability and peace not only for Qatar but the whole Gulf," Erdoğan said in response to black propaganda about the Turkey-Qatar Combined Joint Force Command.

He noted that the solution to the Gulf crisis has been progressing very slowly, and the countries disturbed about close Turkey-Qatar ties are making plans to create regional chaos.

Erdoğan said Turkey has a “special bond” and friendship with Saudi Arabia and has been trying to fulfill the requirements of this friendship and the law of brotherhood between the two countries, regardless of ongoing problems. Meanwhile, he called the United Arab Emirates’ (UAE) activities in the Gulf region “extremely negative,” as he said Abu Dhabi’s hostile attitude against the legitimate government and support for the putschist general in Libya is unacceptable.

“These policies, which are of no use to anyone except those who feed on the instability and Muslim blood in our region, should be abandoned as soon as possible,” he said.

Erdoğan noted that while Turkey and the U.S. have deep-rooted ties with the U.S., the latter has been undermining the strategic partnership between the two countries, especially due to their differing stance on terrorist groups.

"It is evident that not only the United States but also some NATO allies continue to cooperate with the PKK terrorist organization and protect the members of FETÖ (the Gülenist Terror Group), and it poisons the alliance's solidarity,” Erdoğan said, adding that Turkey expects strong solidarity from the U.S. on both issues.

However, Erdoğan said the bilateral relations between the two countries have experienced a positive uptick since U.S. President Donald Trump took office.

“We focus on our common interests rather than disagreements,” he said, adding that Turkey will continue to work with the U.S. in all platforms, including NATO, on such issues as the fight against terrorism, democracy, instability and the termination of conflicts.

The president highlighted that Turkey does not intend to permanently stay in the war-torn country and does not have eyes on anyone’s territory.

“When the crisis is permanently resolved, our presence in Syria will come to an end,” Erdoğan said, as he noted that Turkey has been directly affected by the conflict in its neighbor as it shares a 911-kilometer (566-mile) border and hosts around 4 million migrants and refugees from the country.