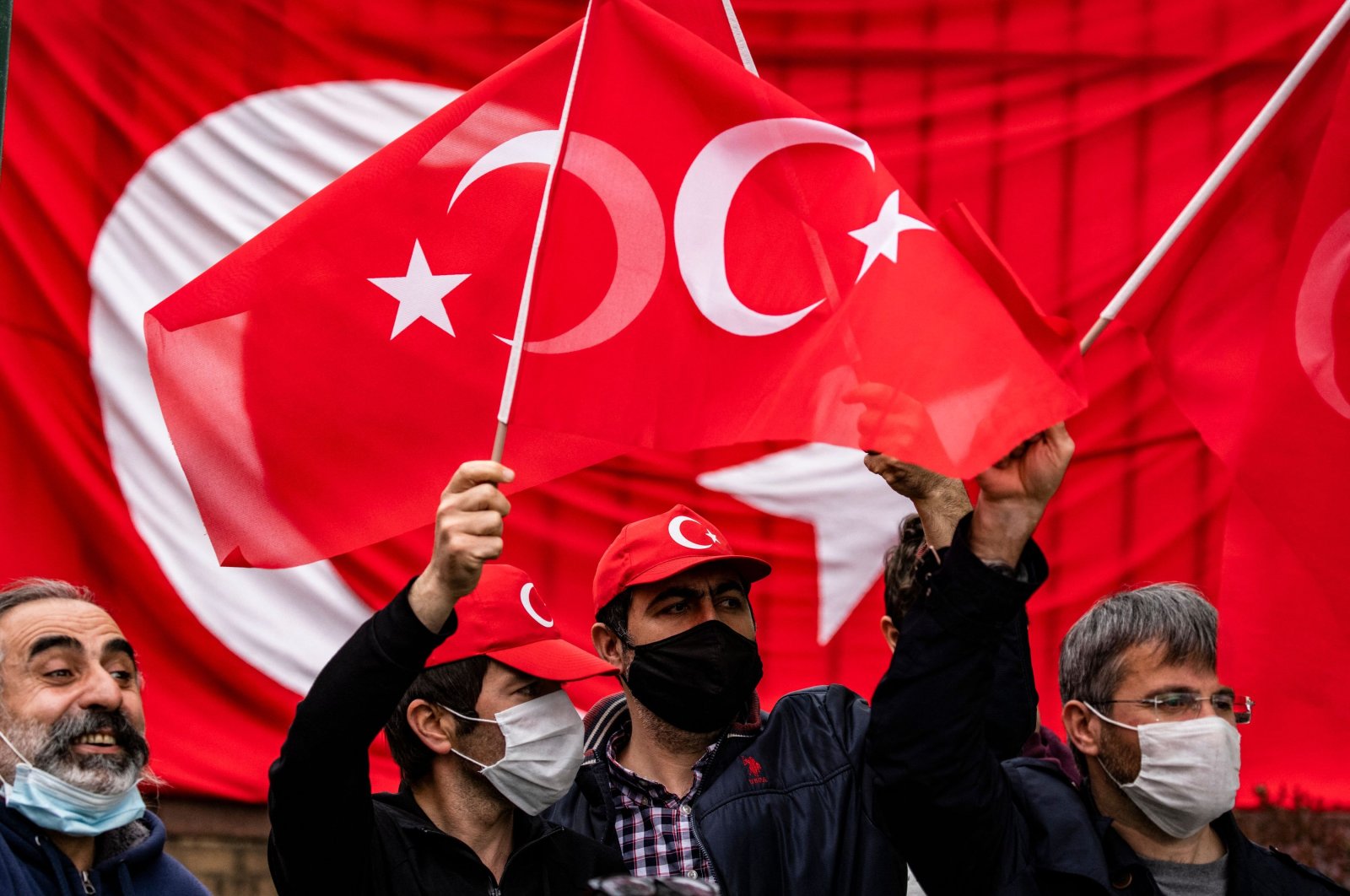 Turkish counter-protestors are kept apart from Armenian protestors to avoid confrontation in front of the Turkish Embassy on the 106th anniversary of the 1915 events in Washington, DC on April 24, 2021. (AFP)
by DAILY SABAH WITH AA Apr 25, 2021 11:38 am
RECOMMENDED

Turkey's allies condemned U.S. President Joe Biden for his controversial decision to label the events of 1915 as "genocide."

The first criticism came from Azerbaijani President Ilham Aliyev on Saturday, who called the decision "unacceptable” and a "historical mistake.”

Aliyev and his Turkish counterpart Recep Tayyip Erdoğan condemned Biden's move during a phone call, the Azerbaijani Presidency said in a statement.

The Azerbaijani leader said the U.S. president's remarks would "seriously damage cooperation in the region,” stressing that Baku will always stand by Ankara.

"The falsification of history, attempts to "rewrite history" and its use for political pressure are unacceptable," Azerbaijan's foreign ministry also said in a statement on Saturday.

Political parties in Azerbaijan also condemned Biden's description of the events of 1915.

A total of 48 political parties issued a joint statement in light of Biden's classification of the 1915 events.

The statement explains that while many Armenian lives were lost due to difficult conditions, internal conflicts, famine and disease during WWI but the fact that more Turkish lives were lost over the same period has been deliberately ignored.

The declaration emphasized that historical facts should not be distorted for political purposes and that international institutions and specialized historians should be entrusted with determining what actually happened. It also highlighted that Turkey has always been willing to open its archives and form a joint commission to shed light on the period.

Recalling the massacres committed by Armenians in Azerbaijan, the statement went on to say:

"The reason for the so-called 'genocide' allegations to be on the world agenda lately is not only the Armenians and the Armenian lobby, but also the global powers pursuing imperialist interests in the region. Their concept of 'genocide' is only a tool of political repression and a manifestation of their double-standard policies. It would be better if these powers took to account the brutal massacres committed by the Armenians in Anatolia."

"I am very saddened by the statement of the U.S. President regarding the events of 1915, which clearly bears political motivations at the expense of historical facts and damaging the hopes of cooperation and stability in the region," Secretary-General Baghdad Amreyev said in a written statement on Saturday.

He noted the need for a "transparent and fair" study of the events of 1915 in line with international law, with the relevant documents applied, as opposed to countries and their people being put on trial by the administrations of third-party countries.

"Weaponization of distorted historical allegations towards another country could only play into the hands of those willing to fan the feelings of hatred, revenge and enmity among the societies," he said.

"While denouncing the statement of U.S. President, I believe that distortion of history with political ends or attempts to 'rewrite history' and its use for political pressure will only beget further polarization among countries and peoples that will hinder peace and stability in our region," he added.

Earlier Saturday, Biden called the events of 1915 a "genocide," breaking from a long-running tradition of American presidents refraining from using the term.

Amreyev also praised Turkey's initiative to establish a joint historical commission to study the events of 1915 and open its archives, calling its constructive approach "brave and commendable."

"By making this statement, the U.S. authorities, unfortunately, sacrificed historical facts to unfounded slanders under the influence of political calculations lobbies and terrorist organizations," Necati Ceylan, the head of the Turkish jurist group, said in a statement.

This accusation against the Turkish nation, which historically is a civilization where different cultures coexist in a climate of peace and tolerance, is unfair and unacceptable in terms of international diplomacy, Ceylan said, calling the distortion of the truth a cheap example of populism.

"Aside from the confusion of law, history and politics, the declarations of an circles whose own history is full of crimes of genocide and racism do not have a legal value and is null and void," noted Ceylan.

Turkey says the events of 1915 were triggered by Armenians in eastern Anatolia siding with the invading Russians and revolting against the Ottoman forces. The subsequent relocation of the Armenians resulted in numerous casualties.

Turkey objects to the presentation of these incidents as "genocide,” describing them as a tragedy in which both sides suffered losses.