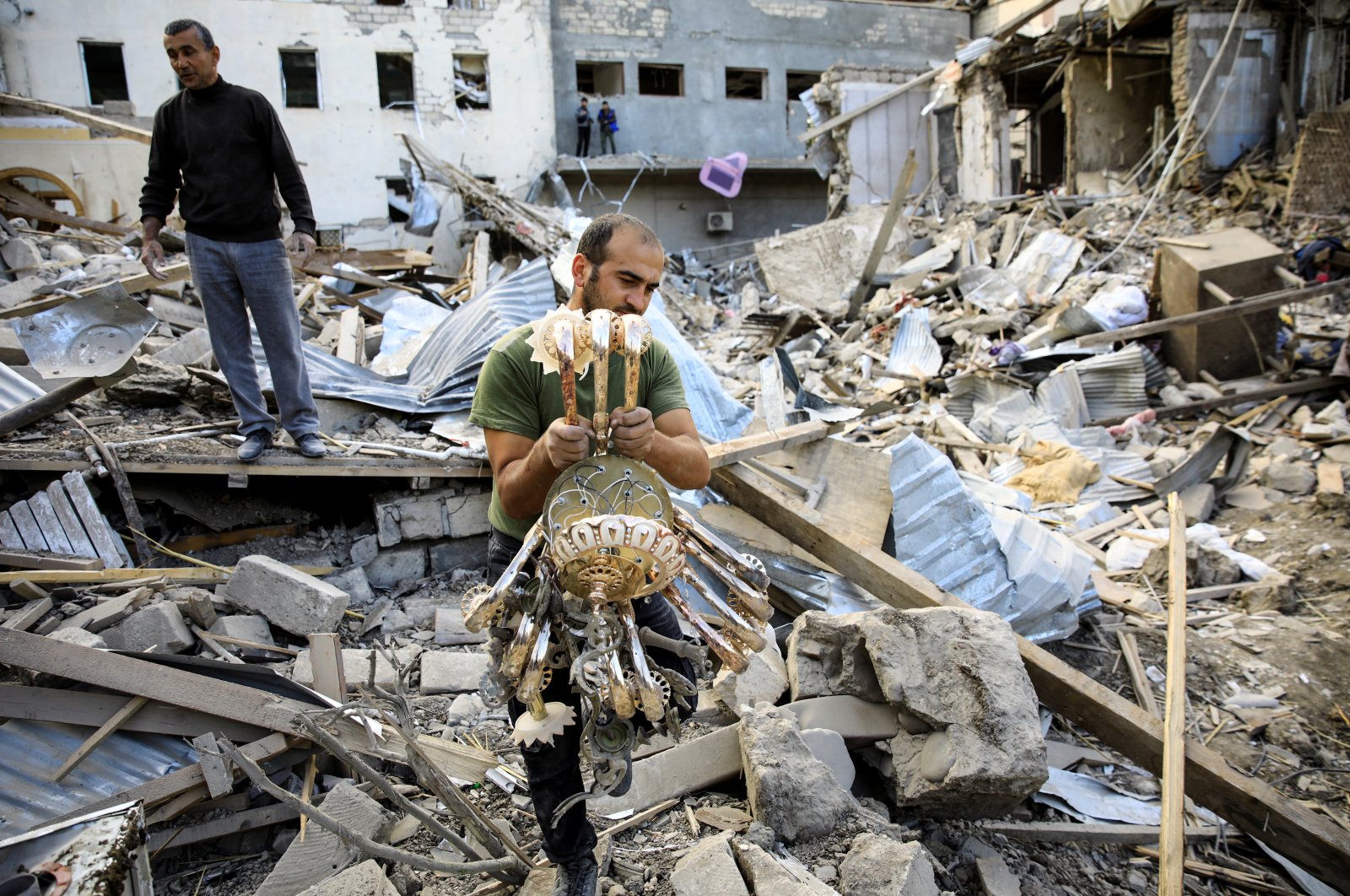 An Azerbaijani man carries a chandelier away from the ruins of a blast site hit by an Armenian rocket over the conflict in the occupied region of Nagorno-Karabakh in the city of Ganja, Azerbaijan, Oct. 11, 2020. (Reuters Photo)
by daily sabah Oct 12, 2020 10:39 am
Edited By Nurbanu Tanrıkulu Kızıl
RECOMMENDED

Turkey’s envoy to Canada urged Ottawa to cooperate with its NATO ally to put pressure on Armenia's leadership to find a peaceful and lasting solution to the ongoing crisis in occupied Nagorno-Karabakh.

In an opinion penned for the Toronto Star, Ambassador Kerim Uras highlighted that Turkey is being “unfairly penalized” for its drone technology, as he rejected claims that the country is directly involved in the conflict between Armenia and Azerbaijan in the occupied region.

Canada recently suspended military export permits to Turkey over the ongoing discord, a decision slammed by Ankara as a “double standard” given that Ottawa continues to ship arms to countries militarily involved in the Yemen conflict, even though it has come under criticism by the United Nations for doing so.

Uras said Canadians have been “bombarded with a disinformation campaign” about the Armenian occupation of Azerbaijani territory, adding that Yerevan’s efforts to pull Ankara into the conflict are “futile."

“On the contrary, the Armenian leadership becomes more hysterical and aggressive by the day, bombing (Azerbaijani) civilians in order to spread the conflict, divert attention away from its illegal occupation and to try and portray Armenia as the 'victim,' rather than the culprit,” Uras said.

The Turkish envoy noted that Armenia’s illegal occupation of Nagorno-Karabakh is the source of the conflict in the region, a fact intentionally concealed by the propaganda of the Yerevan lobby.

“By disregarding these U.N. resolutions, Armenia makes a mockery of international law and the rules-based international system. This is something that I know is close to the Canadian heart and sense of fairness,” Uras said, adding that the Armenian occupation has displaced a million Azerbaijanis.

Calling Armenia’s stance “the biggest obstacle to peace and stability in the South Caucasus,” Uras said Yerevan does not want a peaceful coexistence or a negotiated settlement to the Nagorno-Karabakh issue.

He continued by warning that Armenia has been trying to change the demographic structure of the Azerbaijani territory it has been occupying by resettling ethnic Armenians from Lebanon and Syria.

He also highlighted that Armenian propaganda also aims to conceal the fact that all the fighting has taken place within Azerbaijan’s internationally recognized borders, and “not a single shot has been fired towards the territory of the Republic of Armenia.”

“Turkey does not want conflict and war close to its borders. Our heart goes out to any civilian caught up in the conflict. As is proven by the fact that we are looking after 4 million Syrian displaced persons for close to 10 years, at a huge expense, Turkey is very sensitive about human rights,” Uras said, adding that peace between Azerbaijan and Armenia needs to be permanent and not a “temporary Band-Aid.”

In order to achieve this, Canada and the global community need to put pressure on Yerevan to end its illegal occupation, which would pave the way for permanent peace, the envoy said.

“I believe Canada has a lot to offer to this end. But increasing defense equipment restrictions to a NATO ally, Turkey, simply because it is standing by Azerbaijan, and because the Armenian lobby in Canada is acting like a spoilt child, is not a good message in this direction. Such restrictions do nothing but emboldening the aggressor, Armenia,” he added.

Uras noted that Canada is renowned for upholding international law, and it is about time that it recognizes the suffering of the Azerbaijanis as a result of Armenia’s illegal occupation.

“With this understanding, I call upon our Canadian partners to work with its NATO ally Turkey to put pressure on the Armenian leadership in order to achieve a fair, long-lasting and peaceful solution,” he said.

New clashes erupted on Sept. 27, but international calls for a halt to fighting have gone unanswered until now. Armenia has continued its attacks on civilians and Azerbaijani forces, who are the rightful owners of the occupied region.