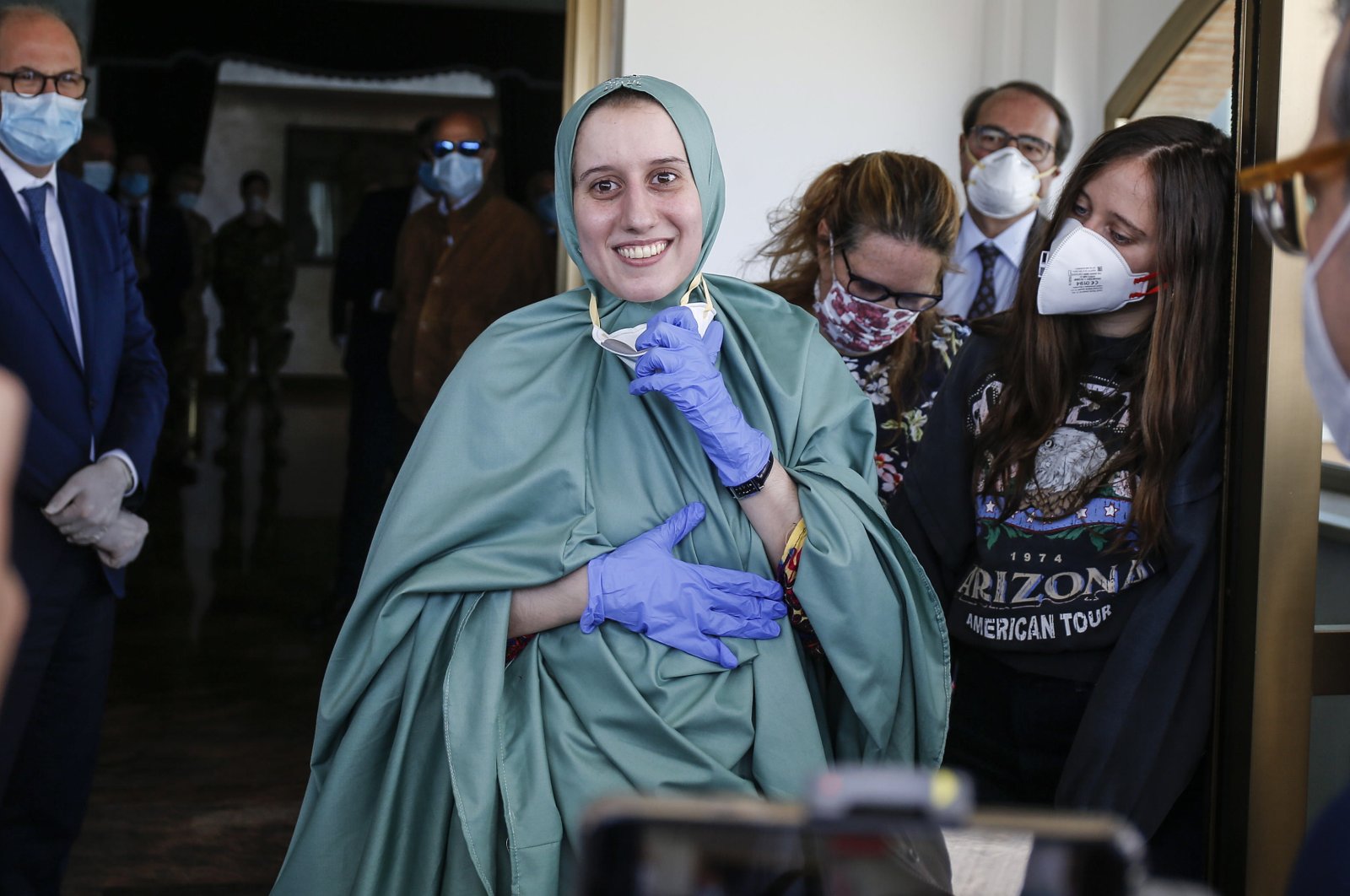 Silvia Romano, an Italian aid worker kidnapped 18 months ago in East Africa, landed in Rome on Sunday a day after being freed, in part thanks to assistance from Turkey's National Intelligence Organization (MİT).

Gunmen seized Romano, who was working for an Italian charity called Africa Milele, in southeastern Kenya in November 2018.

She was found in Somalia, some 30 kilometers (19 miles) outside the capital of Mogadishu and was released thanks to efforts by the external intelligence agency, Italy's Foreign Minister Luigi Di Maio said.

"There had been a cooperation with the Turkish intelligence service in the region located her and to take action at the right time," Italian Deputy Foreign Minister Marina Sereni told LA7 TV channel.

The Italian media stressed that Romano was rescued through a joint effort by the Turkish, Somali and Italian intelligence services.

No group claimed responsibility for her kidnapping, though the terrorist group al-Shabaab is suspected.

Romano touched down at Rome's Ciampino airport aboard a special flight at about 2 p.m. (12 p.m. GMT).

"I am well, luckily, both physically and mentally. I now want to spend time with my family. I am so happy to be back after all this time," Romano was shown saying on arrival in a video posted on daily Corriere della Sera's website.

Escorted by masked men from the intelligence service, Romano temporarily removed her protective mask to wave as she descended the steps from the Italian air force jet before hugging relatives waiting for her at the airport.

She was greeted by Prime Minister Giuseppe Conte and Di Maio.

In her home neighborhood in Milan, church bells saluted her arrival, with many people on their balconies, SKY TG24 showed.

Romano was expected to meet prosecutors in Rome later on Sunday.

Conte said that the task force working to free Romano had been in the final stages "for the last months," after having proof that she was still alive. He added that details were not revealed so as to not compromise the operation.

"We are so glad to welcome Silvia back in such a delicate moment for the country. The State is always there, and will always be there," Conte said.

He thanked efforts from the intelligence services, the judiciary and the defense and foreign ministries, all involved in the release the young woman.

"I am literally bursting with joy at this moment. But it is hard to even only to think, please let me breathe. I need to withstand the shock, happiness is so big that it is exploding," Silvia's father Enzo was quoted as saying by several Italian newspapers on Sunday.

Romano, who went to Kenya to volunteer for Africa Milele, said her kidnappers treated her well and promised her safety.

According to reports by Italy's ANSA news agency, Romano became Muslim recently after reading the Quran, which was a decision she took all by herself, without any pressure from the kidnappers. The article stated that Romano had learned Arabic from her kidnappers and explained their culture, which instilled deep respect within Romano toward Islam and gradually led her to convert.

Meanwhile, various Italian news reports highlighted the impact of Turkey in the rescue process, praising Turkish President Recep Tayyip Erdoğan for his success on the issue. The website Dan Insideover stated that the regions where Romano was being held are places where Turkey has an impact on and this rescue process is a"victory" for Erdoğan in "every aspect."