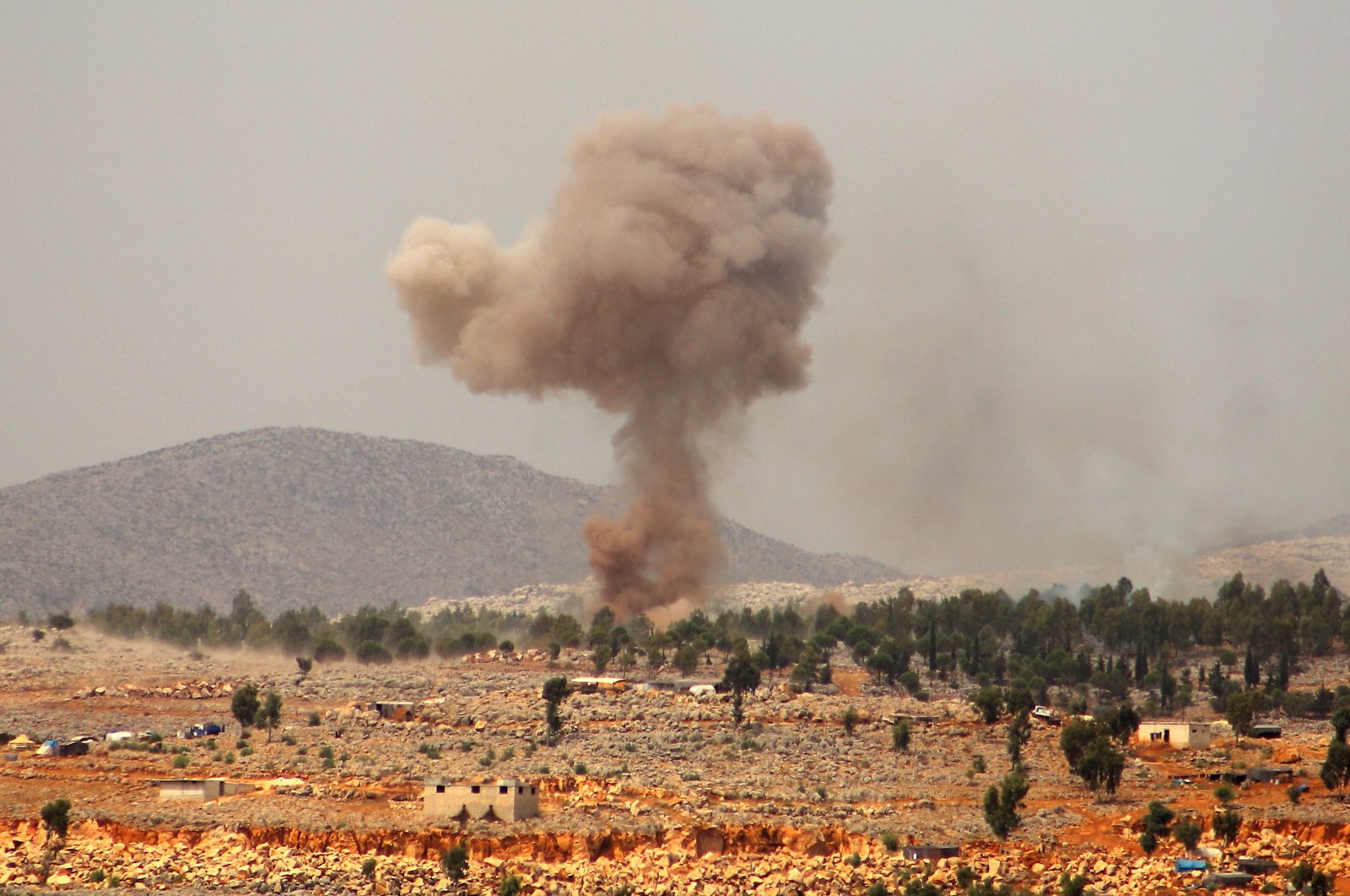 Smoke billows from a reported Russian airstrike near the village of Hafsarjah, in the western countryside of Idlib province in northwestern Syria, Sept. 11, 2020. (AFP Photo)
by DAILY SABAH Sep 15, 2020 10:29 am
Edited By Dilara Aslan
RECOMMENDED

Turkish and Russian officials will meet in Ankara on Tuesday for a new round of talks on developments in Syria and Libya, where the two countries back opposing sides, Turkey's Foreign Ministry said on Monday.

"Consultations between Turkish and Russian interagency delegations on Libya and Syria will continue at a technical level on 15-16 September 2020 in Ankara," the ministry said.

Ankara and Moscow are the main power brokers in Libya's war and have been holding talks on a lasting cease-fire and political settlement. Russia supports the eastern-based forces of putschist Gen. Khalifa Haftar, while Turkey has helped the internationally recognized Government of National Accord (GNA) repel Haftar's offensive.

Last month, the GNA declared a cease-fire in Libya and called for a lifting of a blockade on oil facilities. Aguila Saleh Issa, the leader of a rival parliament to the east, also called for a halt to hostilities. But Haftar, who is also supported by France, Egypt and the United Arab Emirates (UAE), dismissed the move.

Ankara and Moscow also back opposing sides in Syria. Russia, along with Iran, supports dictator Bashar Assad's forces, and Turkey backs the rebels looking to oust him.

After an escalation of violence displaced nearly 1 million people and brought the two sides close to confrontation, Turkey and Russia agreed in March to halt hostilities. Both sides have said the cease-fire has held despite minor violations.

Last week, Russia also met with a delegation in the Syrian capital of Damascus, where economic cooperation to help counter Western sanctions on Syria was discussed, during Russian Foreign Minister Sergey Lavrov's first visit to the war-torn country since 2012.

Russia has been a key ally of the Damascus government since the start of the country's war in 2011, providing critical military backing and signing several major economic deals.

Meeting a Russian delegation headed by Lavrov, Syrian dictator Bashar Assad said "the Syrian government was determined to continue working with Russian partners," to implement signed agreements and encourage the "success of Russian investments in Syria," the presidency said.

Damascus and Moscow have signed several deals in recent years in energy, construction and agriculture. They include one for Russian firm Stroytransgaz to take over Syria's largest port of Tartous for 49 years. Another deal awarded the same company a 50-year concession to extract phosphate in the central region of Palmyra.

Russian Deputy Prime Minister Yury Borisov told reporters that a new economic and trade deal was in the works, which he hoped could be signed during another trip to Syria in December.

Moscow's military intervention in 2015 helped turn the tide of the war, with Russian air power allowing Syrian government forces to win back large parts of the country from opposition forces and terrorists.

Syria's conflict has ravaged the country's economy, killed more than 380,000 people and displaced millions since it erupted in 2011 with the repression of anti-government protests.