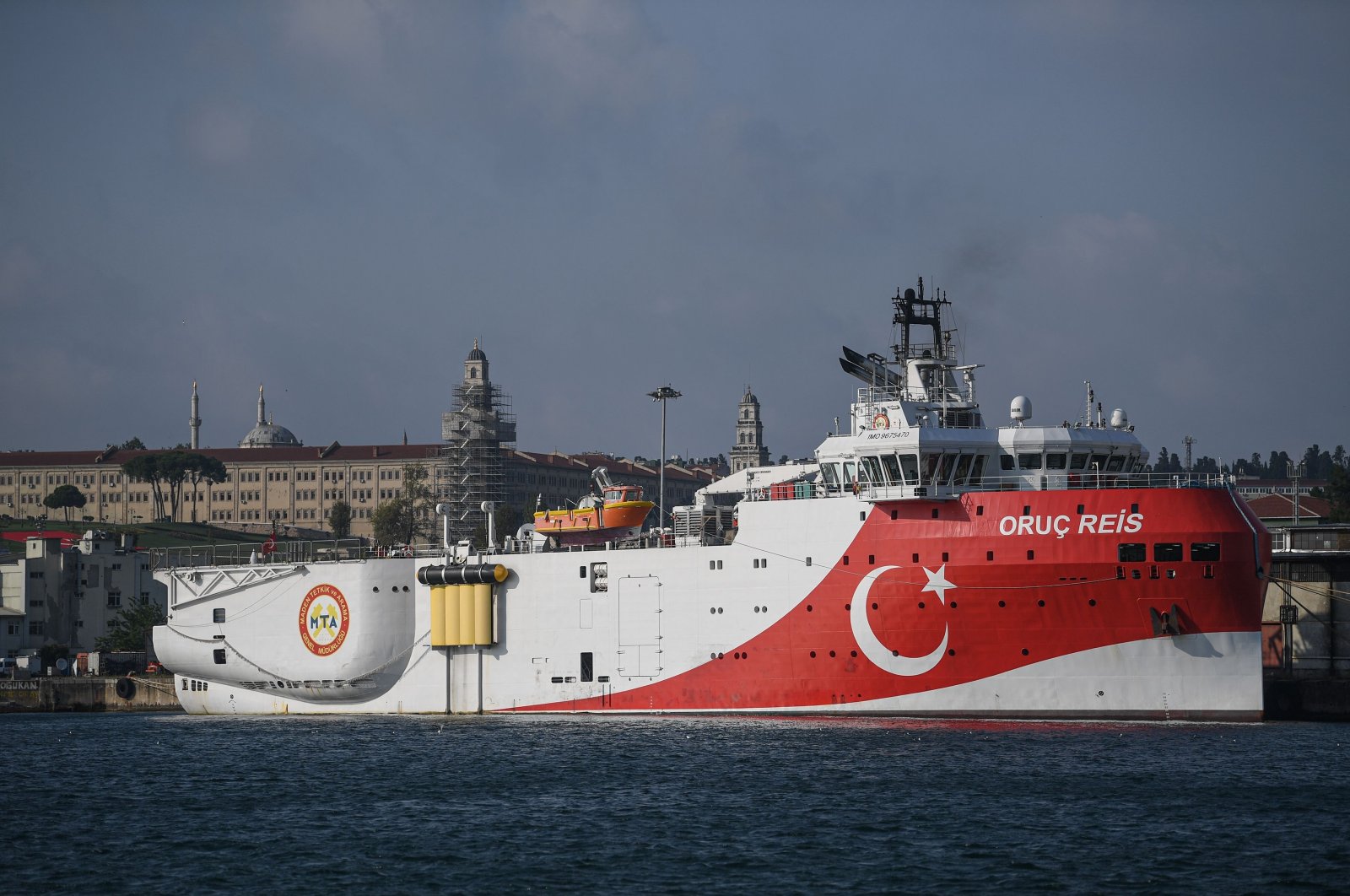 The vessel will carry out seismic studies in the Eastern Mediterranean together with two other vessels, the Ataman and Cengiz Han.

Maintenance work on the Oruç Reis seismic exploration vessel has been completed and it has resumed its mission in the Eastern Mediterranean, Energy and Natural Resources Minister Fatih Dönmez said Monday.

“Our vessel has weighed anchor to take an X-ray of the Mediterranean,” Dönmez said on Twitter, adding that Turkey will continue to explore, dig and protect its rights in the area.

"If there is (natural gas), we will absolutely find it," he added.

Turkey's Communications Director Fahrettin Altun on Monday also said on Twitter: "We remain committed to a diplomatic solution and encourage all parties, including Greece, to support Turkey’s diplomatic initiatives. But there can be no negotiations if you say 'what’s mine is mine and what’s yours is negotiable.'"

Navtex is a maritime communications system that allows ships to inform other vessels about their presence in an area, as well as other information.

The research ship is capable of conducting all kinds of geological, geophysical, hydrographic and oceanographic surveys, especially of the continental shelf and natural resource searches.

It also stands as one of the world's top research ships, holding two-dimensional seismic operations up to a 15,000-meter (49,212-foot) depth in the sea and hold two- and three-dimensional seismic, gravity and magnetic geophysical research.

The Turkish vessel's return comes a day after Turkey's Foreign Ministry issued a statement accusing Greece of “insincerity” for what it said was Athens' continued actions to raise tension while declaring itself to be ready for dialogue. Among other things, the Turkish Foreign Ministry accused Greece of declaring military exercises in the Aegean Sea to coincide with Turkey's Oct. 29 national day celebrations. Turkey retaliated by declaring exercises on Oct. 28, the statement said.

After Athens earlier this summer objected to Ankara's seismic survey in an area south of the island of Kastellorizo, German diplomatic efforts helped defuse tensions between the two neighbors.

Declaring the Greek-Egyptian deal "null and void," Turkey in August authorized the Oruç Reis to continue its activities in an area within Turkey's continental shelf.

In addition, Turkey has long contested the Greek Cypriot administration's unilateral drilling in the Eastern Mediterranean, asserting that the TRNC also has rights to the resources in the area.

The Oruç Reis returned to the Turkish port of Antalya in mid-September, after its time at sea – as determined in its latest Navtex declaration – came to an end.

The vessel's exploration work was initially scheduled to last until Sept. 1. However, later on, the period was extended until Sept. 12, with the expectation of another extension later, continuing until Sept. 25.

However, many argue that talks between Turkey and Greece initiated by NATO in recent weeks are the main reasons behind the vessel's break from work in order to enhance dialogue and ease tension. Still, Turkey highlighted multiple times that the vessel's work will continue after a short break since the country's determination to maintain its rights in the region remains strong.

The Greek Foreign Ministry Monday criticized the decision, calling it a “major escalation and a direct threat to peace and security in the region.”

In response, the Turkish Foreign Ministry said in a statement that Greece's objections were "unacceptable."

The statement said that the Oruç Reis' activities are being conducted completely within the Turkish continental shelf, 15 kilometers (9 miles) from Turkey and 425 kilometers from the Greek mainland. It also noted that Athens' claims are incompatible with international law.

"It is unacceptable to object to our country, which has the longest coast in the Eastern Mediterranean, to operate at a distance of 15 kilometers from the mainland," it said.

"This objection is based on the claims of Greece's maximalist maritime jurisdiction, embodied in the Seville Map. However, it has been announced to the public by the European Union and the United States that the Seville Map is legally invalid," the statement added.

Turkey and Greece had also agreed to resume exploratory talks aimed at building confidence and resolving disputes after diplomatic efforts.

The talks had been stalled since 2016, and the expectation was for their resumption in Istanbul but no exact date was given.

The Turkish and Greek foreign ministers also met last week on the sidelines of a security forum in Slovakia's capital Bratislava in the highest-level talks since tensions began. The ministers had agreed that a date should be set for the start of exploratory talks.

At a summit earlier this month, the European Union threatened sanctions if Turkey failed to stop what the bloc says is illegal drilling and energy exploration activities in waters claimed by Greece.

Turkey described the threat as "unconstructive," but its latest move will cause further strains in Ankara's already tense relationship with Brussels.

The German foreign minister is expected to visit Ankara on Wednesday, where the subject of the Eastern Mediterranean will be high on the agenda.