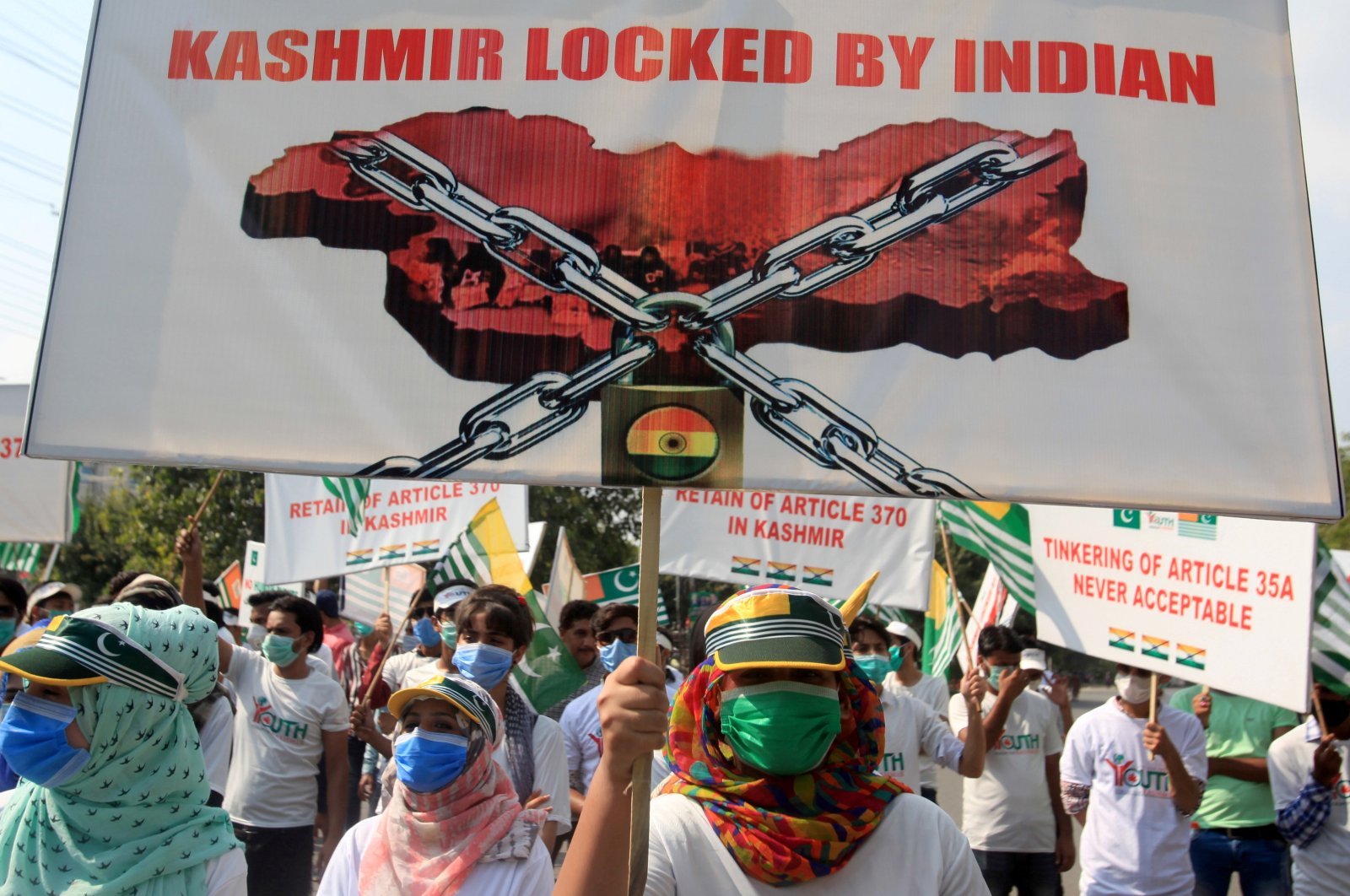 People carry signs as they mark the "Day of Exploitation in Kashmir" one year after the Indian government split the state of Jammu and Kashmir into two federally controlled territories and took away its special privileges, during a march in Lahore, Pakistan, Aug. 5, 2020. (Reuters Photo)
by DAILY SABAH WITH AA Aug 11, 2020 11:19 am
RECOMMENDED

The festering Kashmir dispute between nuclear neighbors India and Pakistan needs to be resolved for sustainable peace in South Asia, said the United Nations General Assembly's (UNGA) president-elect on Monday.

Bozkır, a former Turkish diplomat, who is set to take the General Assembly helm on Sept. 15, arrived in Islamabad on Sunday evening on a two-day maiden visit.

Apart from the U.N. Security Council resolutions on Kashmir, he observed, there is the 1972 Simla Agreement between Islamabad and New Delhi which called for resolving the dispute through political and diplomatic channels and in line with the will of Kashmiris, state-run Pakistan Television reported.

Asked about an improved role for the U.N. Military Observers Mission, which has been supervising the cease-fire between India and Pakistan in the disputed region since 1949, Bozkır said he would consult with the secretary-general and other U.N. officials once he takes office.

"Turkey's stand on Kashmir is well-known to the world. It has been explained time and again," he said.

"As a Turkish citizen, my hands are big for Pakistan, but as a UNGA president, I have to follow certain procedures and maintain impartiality."

One of the main objectives of this visit, he went on to say, is to understand the latest situation in disputed Jammu and Kashmir, so that "when the issue comes" to the General Assembly, they can discuss it accordingly.

Foreign Minister Qureshi, for his part, accused India of changing the demography of Muslim-majority Jammu and Kashmir through a slew of actions, mainly by its revocation one year ago of the disputed valley's decades-long special status.

He urged the U.N. and the international community to pressure India to end the "military siege" and communications blockade in the Himalayan valley imposed since Aug. 5 of last year and to release the pro-freedom leaders and political activists.

On Aug. 5, 2019, Indian Prime Minister Narendra Modi's government took away Jammu and Kashmir's special privileges, provoking anger in the region and in neighboring Pakistan. It also took away Jammu and Kashmir's status as a state by creating two federally controlled territories, splitting off the thinly populated, Buddhist-dominated region of Ladakh.

Kashmir is held by India and Pakistan in parts and claimed in full by both. A small sliver of Kashmir is also held by China.

Some Kashmiri groups in Jammu and Kashmir have been fighting against Indian rule for independence, or unification with neighboring Pakistan.

According to several human rights groups, thousands of people have been killed in the conflict in the region since 1989.

The Turkish Foreign Ministry last week said that the Indian government annulling the special status of the disputed Jammu and Kashmir area does not contribute to peace and stability in the region, on the occasion of the first anniversary of India's decision to revoke the seven-decade-long semi-autonomous status of the Himalayan region.

"It is observed that practices implemented over the last year – since the abolishment of the article (370) of the Indian constitution that granted special status to Jammu and Kashmir – have further complicated the situation in Jammu and Kashmir and not served peace and stability in the region," the ministry said in a statement.

Ankara further reiterated Turkey's call for dialogue to resolve the issue under U.N. charters and resolutions.