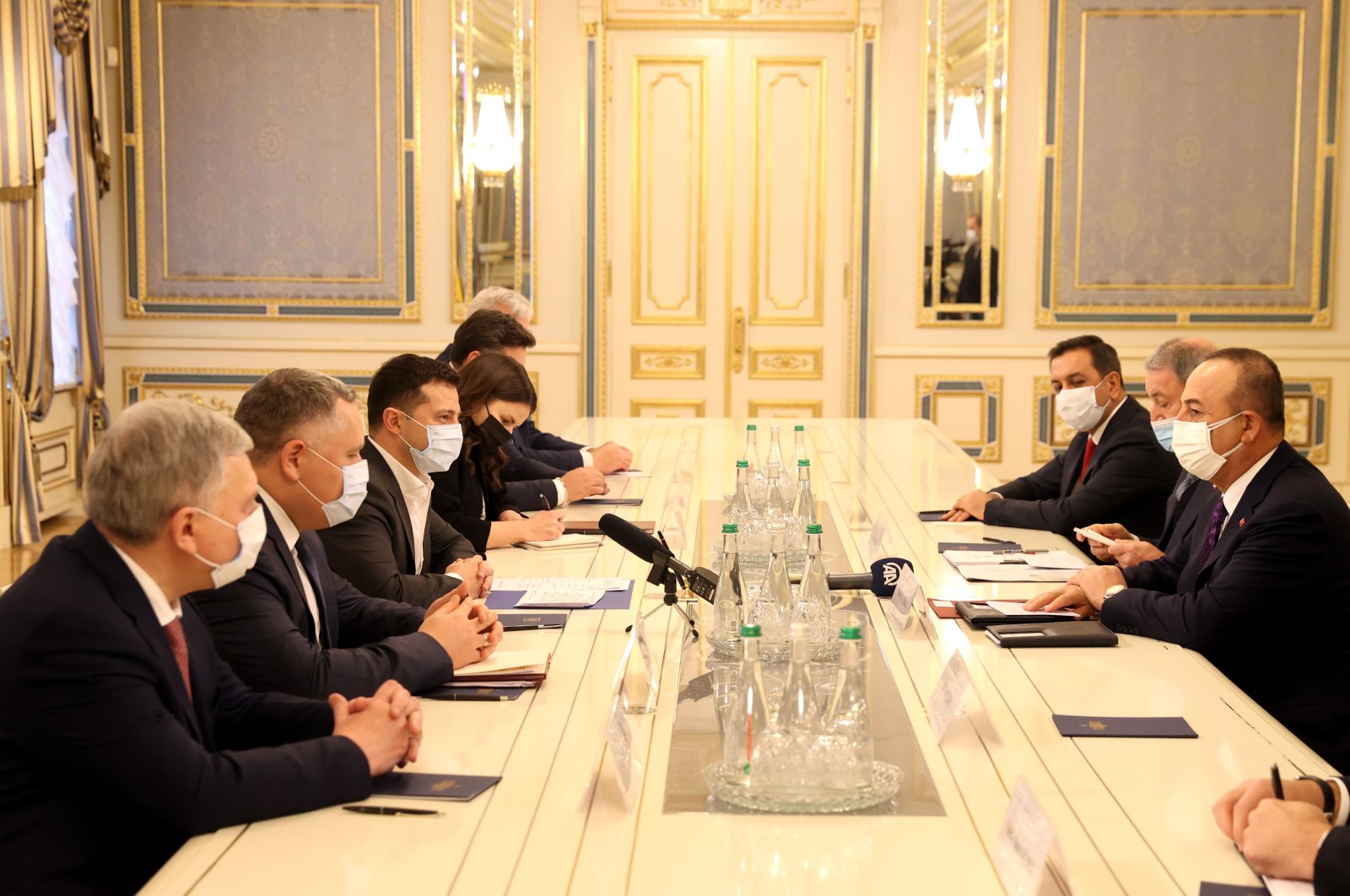 In a Twitter post, Zelensky said: “Getting ready for another session of High-level Strategic Council in early 2021.”

“(I am) Grateful to Turkey for supporting Ukraine’s territorial integrity and sovereignty,” he said, adding that he would be glad to meet President Recep Tayyip Erdoğan in the Ukrainian capital soon.

Çavuşoğlu, speaking on Ukraine’s territorial integrity, said: "We want the problem in the Donbas region to be resolved within the framework of Ukraine's border integrity."

President Erdoğan and Turkish officials have always reiterated their remarks on ensuring the protection of human rights in illegally annexed Crimea, as well as voicing that the dispute in the Donbas region in eastern Ukraine could likewise only be resolved through political and diplomatic means.

"We reiterate once again today our support for the Crimean platform," Çavuşoğlu continued, noting: “We do not recognize the Crimea’s illegal annexation. We support Ukraine's territorial integrity, including Crimea.” Ankara has also clearly reiterated its position on the issue to the United Nations and other platforms.

Since then, Crimean Tatars have continued their struggle for Ukraine's territorial integrity against Russian occupation.

Crimea’s ethnic Tatars have faced persecution since Russia’s 2014 takeover of the peninsula, a situation Turkey has decried.

Turkey and the United States, as well as the United Nations General Assembly (UNGA), view the annexation as illegal.

Çavuşoğlu went on to say that Ankara-Kyiv relations have developed fast in every field.

Stating that they had the opportunity to discuss both bilateral and regional issues during Friday's talks, Çavuşoğlu emphasized that there is a wide range of cooperation between the two countries such as economy, education, tourism and the health sector.

“Despite the pandemic, we were delighted to host 1 million Ukrainian guests in our country,” he added.

After the meeting with the Ukrainian prime minister, Çavuşoğlu and Akar also met Ahıska Turks, also known as Meskhetian Turks and Gagauz Turks living in Ukraine.

Meanwhile, Turkish Defense Minister Hulusi Akar also told the news conference that Ankara is aware of the importance of peace and stability in the Black Sea region.

"We would like everyone to know that we are very cautious and sensitive about this. We are taking all measures not to let any provocations, tension [in the region]," Akar noted.

Congratulating Ukraine on being recognized as an Enhanced Opportunities Partner by NATO, Akar said it was an "important step".​​

Akar said they continue working together as co-chairs of Turkey-Ukraine Joint Economic Commission, and added: "We do important work not only on defense and security issues but also on trade, investment, and tourism issues and I would like to state that these will be fruitful in the coming period and will be very beneficial for both countries."

"This meeting shows the governments of Ukraine-Turkey give to the improvement of their strategic partnership," Taran said.

Stating that the two countries also boost military and technical cooperation, he said agreements on production and procurement of corvette and armed drones for the Ukrainian army was signed this week.

Ukrainian Foreign Minister Dmytro Kuleba, for his part, said they have undertaken "the pride" of opening a new page in the history of Ukraine-Turkey relations.

"This format will be important in terms of Turkey's support towards the Euro-Atlantic integration of Ukraine," Kuleba said.