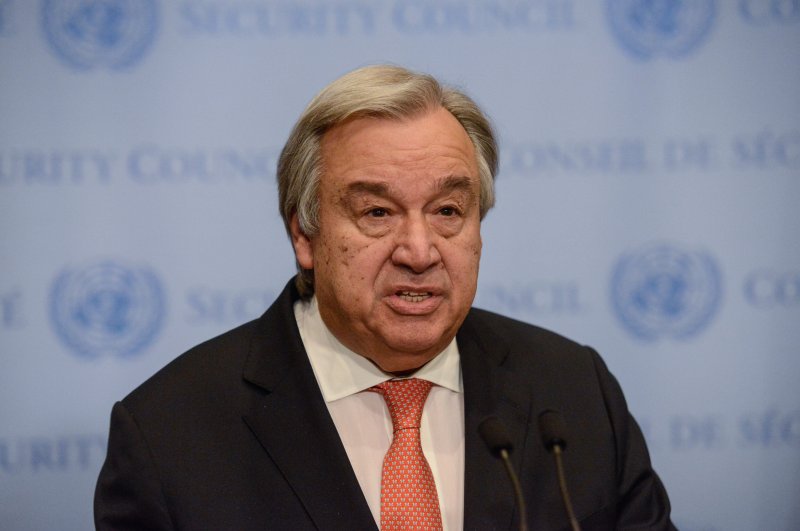 U.N. Secretary-General Antonio Guterres on Thursday reiterated his call for an "immediate cease-fire" in northwestern Syria following a deadly airstrike by Syrian regime forces on Turkish troops in Idlib province.

In a statement, the secretary-general's spokesman, Stephane Dujarric, said Guterres is monitoring the escalation in the region and reports of fallen Turkish soldiers with "grave concern."

Guterres "expresses particular concern about the risk to civilians from escalating military actions," said Dujarric. "Without urgent action, the risk of even greater escalation grows by the hour."

He said there is no military solution to the Syrian conflict.

"The only sustainable solution is a U.N.-facilitated political process pursuant to Security Council resolution 2254 (2015)," said Dujarric, referring to an endorsed road map for a peace process in Syria.

Later on Friday U.N. urged international community to provide stronger support to Turkey for Syrian refugees after migrants pile up at the Turkey-Greece border.

According to U.N. officials, some 900,000 people have been displaced by the offensive carried out by the Bashar Assad regime backed by Russia since December.

At least 33 Turkish troops were killed in the airstrike, according to Hatay Gov. Rahmi Doğan.

Ankara has vowed to retaliate against the "illegitimate" Syrian regime in the wake of the attack.

Following the airstrike, the U.S. expressed concern over the reported deaths of the soldiers.

"We stand by our NATO Ally Turkey and continue to call for an immediate end to this despicable offensive by the Assad regime, Russia and Iranian-backed forces," a State Department spokesperson speaking on the condition of anonymity told Anadolu Agency (AA).

The U.N. Security Council will hold an emergency meeting Friday to discuss the escalation of fighting in Syria.

The meeting is expected to begin at 2100 GMT, the acting chairman of the council, Belgian Ambassador Marc Pecsteen de Buytswerve, told reporters.

He said the meeting has been requested by the United States, Germany, Britain, France, Belgium, Estonia, and the Dominican Republic.