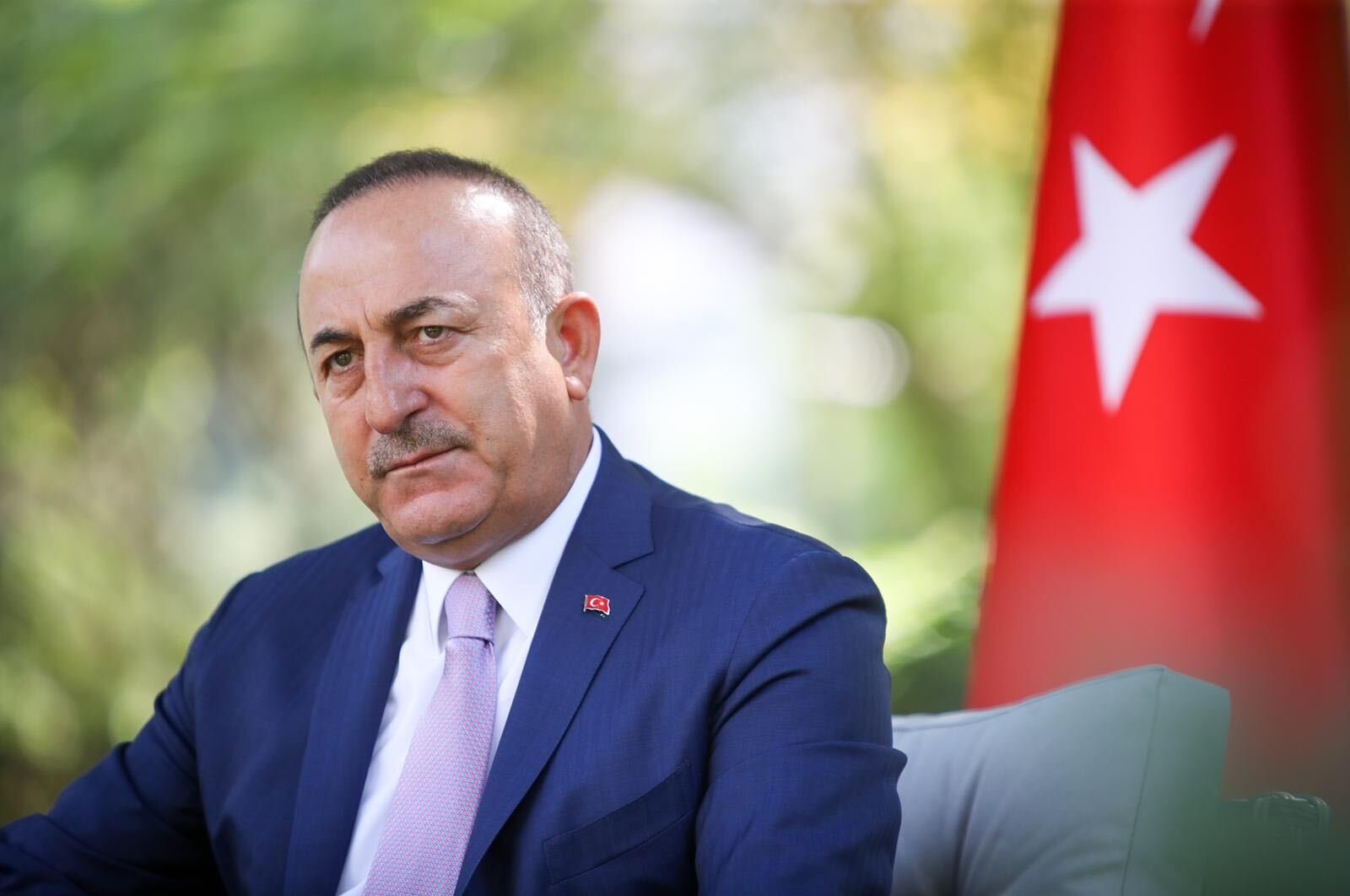 The United States' decision to partially lift an arms embargo on Greek Cypriots will encourage the Greek Cypriot administration not to engage in a political solution to the Cyprus issue, Foreign Minister Mevlüt Çavuşoğlu said Wednesday, stressing that this step would further increase inequality during these critical times.

“Though this decision is limited to light arms, according to the U.S., we told Washington that it marked a step in the wrong direction. In return, we said that Turkey would also increase its aid to Turkish Cypriots, which would cause tensions,” Çavuşoğlu told Daily Sabah in an exclusive interview.

“Intentionally or not, the timing of this situation is improper,” he underlined.

The decision will affect the export, re-export, retransfer and import of non-lethal defense articles and services for the upcoming fiscal year that begins in October.

The U.S. embargoed arms sales to the Greek Cypriot administration in 1987 under the pretext of preventing an arms buildup on the island.

The U.S. announcement comes amid strained relations between Turkey and several nations in the Eastern Mediterranean.

The European Commission earlier Tuesday called for dialogue with Turkey to find a solution to de-escalate the crisis.

Apparently seeking to block Turkey's maritime territorial claims, Greece signed exclusive economic zone (EEZ) deals with Italy on June 9 and with Egypt on Aug. 7 following a deal struck between Turkey and Libya on Nov. 27, over the countries' maritime borders.

The maritime pact asserted Turkey's rights in the Eastern Mediterranean in the face of unilateral drilling activities by the Greek Cypriot administration, clarifying that the Turkish Republic of Northern Cyprus (TRNC) also has rights to the resources in the area.

Turkey expects sincere mediation from the European Union and Germany in resolving increasing tensions with Greece in the Eastern Mediterranean, Çavuşoğlu said.

The top diplomat pointed out that efforts so far had failed due to a lack of honesty and the EU favoring Greece and its maximalist claims in the region.

“Yes, Germany engaged in efforts for mediation, yet this has to be sincere; what is said to us also has to be stated in front of the public. In this manner, the conditions laid down for us are not the same as those laid down for Greece,” Çavuşoğlu said.

“They ask us to cease all kinds of activity in order to start a dialogue with Greece, while Athens in return has to do nothing,” Çavuşoğlu said, adding that it is unacceptable to expect Turkey to give up on all its rights just to launch a dialogue.

Last month, German Chancellor Angela Merkel's diplomatic efforts helped defuse tensions between Turkey and Greece after Athens objected to Ankara's seismic survey in an area south of the island of Kastellorizo (Megisti-Meis), one of the smallest Greek islands in the Aegean Sea and only 2 kilometers (1.2 miles) from the Turkish coast.

But Greece's controversial move last week to sign a maritime delimitation agreement with Egypt, which Turkey says violates its continental shelf and maritime rights and those of Libya, has exacerbated tensions between the two neighbors.

“Greece and the Greek Cypriot administration are holding the EU hostage,” the minister said, indicating that Germany’s efforts had continued, but a huge obstacle is that the EU takes its decisions unanimously.

In recent weeks, Turkish and Greek warships have shadowed each other in the Eastern Mediterranean while the leaders of the two countries have engaged in angry rhetoric. The armed forces of Greece and Turkey have also conducted exercises in the seas between Cyprus and the Greek island of Crete.

The standoff was sparked when Turkey sent its research vessel, Oruç Reis, accompanied by warships to search for gas and oil reserves. The Turkish government said Monday it was extending the drilling mission by another 10 days, until Sept. 12.

Regarding an EU diplomat telling Reuters on Aug. 31, “As well as sticks (sanctions), there will be carrots too to get Ankara to engage seriously in dialogue,” Çavuşoğlu said that Turkey had already received its carrot and knew what it would not get.

The top diplomat stated that the carrot would be progress on the customs union and the migration deal, while the stick would be sanctions and criticism.

“What has this (tension in the Eastern Mediterranean) to do with the customs union or refugee agreement?” the minister asked, underlining that the two represented an advantage for both Turkey and the EU.

The minister highlighted that Turkey would not give up on its vital rights in the Eastern Mediterranean just to avoid sanctions.

Indicating that Turkey had explained its position to NATO, the United Nations, the permanent members of the U.N. Security Council, and the EU, Çavuşoğlu stated that the international community supported Ankara, though not publicly. The minister stated that further efforts would continue and that Turkey was ready for future steps.

“The healthiest way would be to initiate exploratory talks with Greece. Just as we were to launch these talks, they inked a deal with Egypt and displayed their intentions. Our stance is clear: we will do what is necessary both on the field and at the (negotiating) table,” the top diplomat underlined.

Apart from Greece and the Greek Cypriot administration, tensions are also growing between Turkey and France, another NATO ally, which has opted to throw its full weight behind Athens.

Speaking on France’s latest moves in support of Greece, which have escalated tensions, Çavuşoğlu said: “There is an attempt to weaken NATO and to create an EU force as an alternative to the alliance. Therefore, France tries to increase tensions to prove that such a force is necessary and stated that NATO suffered brain death.”

Another regional issue of high importance for Turkey and linked to the current tension in the Eastern Mediterranean is the almost decadelong civil war in Libya.

The oil-rich North African country was thrown into chaos after veteran dictator Moammar Gadhafi was ousted in a 2011 NATO-backed uprising. Rival administrations, the legitimate Libyan government and putschist Gen. Khalifa Haftar, have been vying for power ever since, increasingly drawing in foreign interests and threatening the region's stability.

Haftar’s support has been eroding as the legitimate Government of National Accord (GNA), with Turkey’s support, turned the tide in his offensive to seize the capital Tripoli that was launched in April 2019, Çavuşoğlu said, elaborating that Turkey had strived for permanent peace and stability in the country by working in coordination with the U.N. and the administration in Tripoli.

“Countries like France, the United Arab Emirates (UAE) and Egypt have been seriously disappointed in Haftar,” the minister said, referring to the warlord’s main backers.

Fayez Sarraj, head of the Tripoli-based GNA, announced a cease-fire on Aug. 21 and called for the demilitarization of the cities of Sirte and Jufra, which would mean the withdrawal of Haftar’s forces.

Çavuşoğlu said that demilitarizing Sirte and Jufra was one of the conditions and ideas for a permanent cease-fire in the war-torn country.

Fighting has stalled around the central Mediterranean port of Sirte, the gateway to Libya's eastern oil fields and export terminals and to the key Jufra air base to the south. Sirte lies roughly halfway between Tripoli in the west and Libya's second-largest city Benghazi in the east.

“These are vital provinces for Libya, therefore bases and deployment here is significant in that it may enable further attacks on Tripoli and Misrata. Therefore, some countries have given Haftar unconditional backing and have gotten angry as Haftar could not profit from this. Now they have started to look for alternatives,” Çavuşoğlu said.

“Everyone got tired of Haftar’s incomprehensible attitude, thus, Saleh is being pushed to the front (as an alternative). There are significant differences of opinion between Saleh and Haftar,” the minister said.

Attacks by terrorist elements and the Bashar Assad regime have continued in Syria as delegations of the regime, opposition and civil society groups met in Geneva last week for a third round of talks to work on a new constitution for the war-ravaged country.

“The regime does not believe in a political solution,” Çavuşoğlu said, noting that the regime violated a fragile cease-fire agreed on by Turkey and Russia, which back opposing sides in Syria's war, on March 5, aiming to halt military activity in the Idlib region after an escalation of violence displaced nearly 1 million people and brought the two sides close to confrontation.

The deal addresses Ankara's main concerns, stopping the flow of refugees and preventing the deaths of more Turkish soldiers on the ground.

However, despite the cease-fire, regime forces regularly carry out attacks and attempt to enter the province.

Çavuşoğlu said that the regime brought radical groups to the Idlib region in order to be able to intervene using terrorist groups as an excuse and pointed out that these groups previously attacked a joint Turkish-Russian convoy in the northwestern province.

The minister also touched upon the recent meeting between Russian officials and the YPG/PKK, the Syrian offshoot of the PKK, an internationally recognized terrorist group that has killed 40,000 people in Turkey.

Çavuşoğlu stated that Moscow approaches the YPG/PKK whenever the U.S. distances itself from the terrorist group, and criticizes the group when it approaches the U.S.

“The signing of a cooperation agreement in Moscow is harming the territorial integrity of Syria. It is wrong to bring legitimacy to terrorists,” Çavuşoğlu stressed.

Çavuşoğlu also reiterated that Moscow did not keep its promises to clear YPG/PKK terrorists out of the Tal Rifaat and Manbij regions of Syria.

An agreement was signed between the two countries in late 2019 on northeastern Syria, outlining the establishment of a safe zone that would aid the return of Syrian refugees while preventing the formation of a terror corridor to Turkey’s south. Russia was set to drive YPG/PKK elements from the area.