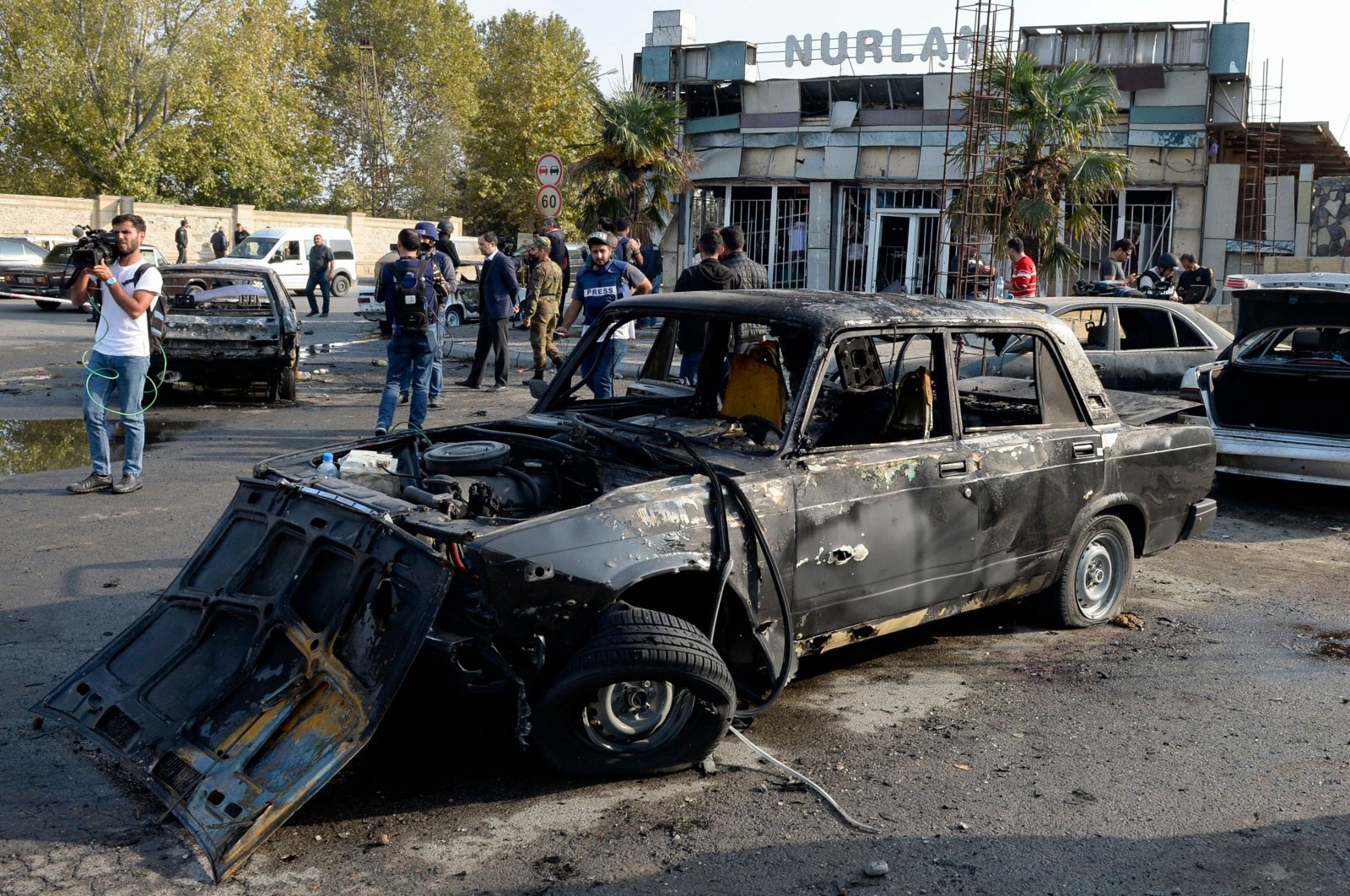 Journalists work at the site hit by recent shelling during the ongoing military conflict between Armenia and Azerbaijan over the Nagorno-Karabakh region in the town of Barda, Azerbaijan, Oct. 28, 2020. (AFP Photo)
by DAILY SABAH WITH AA
Oct 29, 2020 11:58 am

'Bombs rained down on us,’ said Azerbaijani civilians who survived Armenia's rocket attacks on Barda city, describing the horrifying assault that took at least 21 lives

As Armenian forces on Wednesday conducted the deadliest attack on civilians since new fighting over the occupied region of Nagorno-Karabakh broke out a month ago, Azerbaijani victims injured during the Armenian shelling in Barda's city center shared their terrifying experiences.

“I was standing in front of a shop in the bazaar during the attack. Bombs rained down on us. We started to flee in panic,” Aynure Ibrahimova, who sustained injuries to her stomach, told Anadolu Agency (AA).

For Intikam Agayev, the attacks were swift, leaving him no time to react.

"I was sitting in my car in the city center of Barda. Suddenly, I heard the explosion and the screams of the people around me. I was injured too,” he said.

Agayev suffered injuries to his foot and face from the shrapnel that hit the vehicle. "I could not remember how I was brought to the hospital. I opened my eyes and found myself in the hospital bed,” he said.

His cousin, Cavanshir, said he saw pieces of bombs falling from the air, and the bazaar suddenly turned into a battlefield with everyone in a state of panic.

Armenian forces on Wednesday hit the city center of Azerbaijan's Barda with missiles, setting multiple shops and vehicles on fire. At least 21 civilians were killed and more than 40 injured in the attack.

This followed Tuesday's attacks that killed at least four civilians, including a toddler, in an Armenian missile strike on a village in Barda.

The World Azerbaijanis Assembly (WAA) on Wednesday condemned the attacks of the Armenian forces on Azerbaijani civilians and military units.

"Along with expelling the occupying Armenian Armed Forces from our historical lands, Azerbaijan is also clearing the South Caucasus region of separatist and terrorist forces," Elshan Yahyayev, the public relations head of a German-based assembly, told Anadolu Agency (AA).

"Of course, the aim here is to save Armenia, which cannot withstand the victorious army of Azerbaijan," he said, adding that Azerbaijani President Ilham Aliyev "resolutely resists" all these pressures and responds "appropriately" to those who try to influence Azerbaijan by various means.

The military-political leadership of Armenia violates and ignores the norms and principles of international law, Yahyayev added. Such actions have been observed by Azerbaijan again since the clashes erupted on Sept. 27.

He also decried the footage and reports appearing on social media of Armenian children volunteering and being recruited for the Armenian Army.

"By involving young children, the elderly and women in the war, Armenia's military-political leaders continue their criminal activities and will undoubtedly soon become subjects of The Hague tribunal," Yahyayev said, referring to the International Criminal Court (ICC).

On Sunday, Azerbaijan, with pictures and footage proving the war crime, accused Armenia of using child soldiers in the battle over the occupied Nagorno-Karabakh.

"Video shows that #Armenia employs #childsoldiers. Needs to be investigated. Recruiting and using children under the age of 15 as soldiers is prohibited under international humanitarian law – treaty and custom – and is defined as a #warcrime by ICC," Hajiyev said on Twitter.

Yahyayev stressed that involving children in the battle "grossly" violates Article 38 of the Convention on the Rights of the Child, adopted at the 44th session of the United Nations General Assembly on Nov. 20, 1989.

"With the blood of hundreds of thousands of people on both sides, Armenia has created an unhappy society that is backward on many sides, out of all international transport and logistics projects, in an economic and geographical siege, and with no prospects for life," he said.

He also underlined that it was "unfortunate" that international organizations turn a blind eye to Armenia's "whims and criminal behavior."

"It is their inaction that drives Armenia to new crimes," Yahyayev also said.

The WAA, an international nongovernmental organization, was registered in the German judiciary on Sept. 6, 2016. Prior to its registration, the organization functioned as an initiative group.

To date, the WAA has been considered the first international public organization of Azerbaijanis, according to Yahyayev. The assembly is also registered as a lobbying body by the U.N. Social and Economic Council, the European Commission and the European Parliament.

Multiple U.N. resolutions as well as international organizations have demanded the "immediate, complete and unconditional withdrawal of the occupying forces" from the occupied Azerbaijani territory.

In total, about 20% of Azerbaijan's territory – including Nagorno-Karabakh and seven adjacent regions – has been under illegal Armenian occupation for nearly three decades. The Minsk Group, which was set up in 1992 by the Organization for Security and Co-operation in Europe (OSCE) and is co-chaired by Russia, France and the U.S – was formed to find a peaceful solution to the conflict but to no avail. A cease-fire, however, was agreed to in 1994.