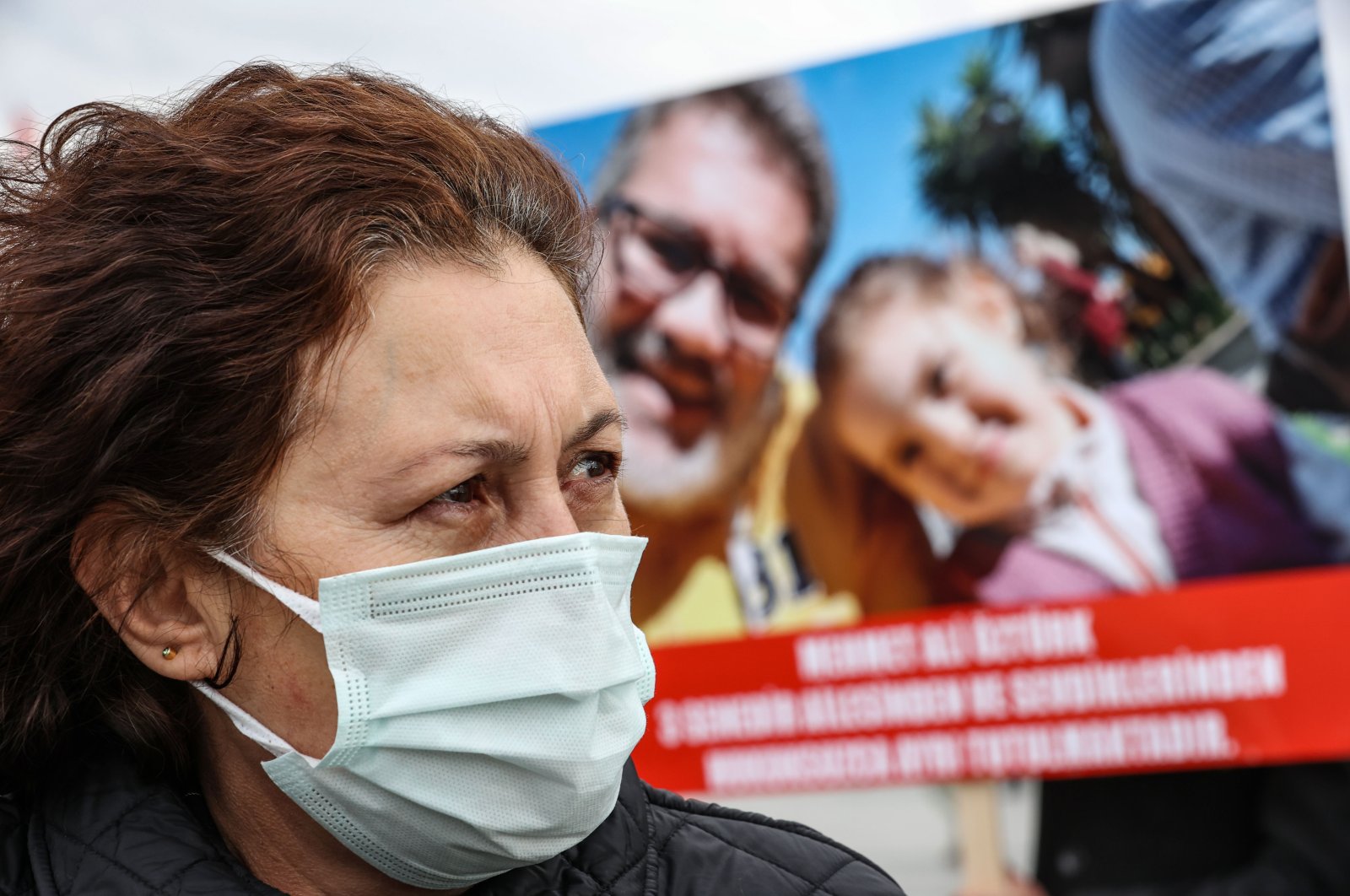 Emine Öztürk stands in front of a picture of her husband Mehmet Ali, imprisoned in the UAE, alongside their daughter, in Istanbul, Dec.11, 2020. (AA Photo)
by Anadolu Agency Dec 11, 2020 8:44 pm
RECOMMENDED

The wife of a Turkish businessman, who was sentenced to 25 years in prison in the United Arab Emirates (UAE) on trumped-up charges, said her life has changed for the worse.

Emine Öztürk, who owns a Turkish pulses company with her husband Mehmet Ali, said they were detained at the Gulfood Fair in Dubai in February 2018.

Their heads were covered with cloth bags, they were handcuffed and taken to an unknown location by people in plainclothes.

She was deported to Turkey, while her husband was sentenced to prison.

On the third day of the fair, when they were having breakfast in the hotel where they were staying, they were cornered by five or six people.

She said: "They addressed my husband, and he said ‘Yes?'. My husband's English is not very good. They took my husband's phone right off the table."

"I said: 'Who are you and why are you acting like you know us?' They said: 'Don't ask questions.'"

When she told them she was his wife, they took her phone too and asked the couple to follow them.

"They took us upstairs. The door of our room was open and there was someone inside. Our room was being searched, I was shocked. They said: 'pack the suitcase now.' We quickly went down to the lobby, led by a few more people. They weren't officials, they were civilians."

During the whole time, they kept her husband's mouth clasped tightly.

She saw a friend in the lobby and yelled at him to notify the Turkish Embassy. "This time, they clasped my mouth too."

"We went outside the hotel. There were armored vehicles. They handcuffed us in front of the vehicle and put a bag over our heads. They put us in the car, and took us away," she said.

Öztürk said that she constantly asked who they were when she was taken in the car.

"If they would have said they were cops, I would have been relieved that we were in the hands of the law enforcement officers. They didn't say that. They were scared because I was so nervous. I said: 'Remove my blindfold', they opened it. The next thing I know, we were in the desert. There was nothing. At that moment I thought they will kill us. It occurred to me that I had a little girl. I said: 'I have a daughter, she needs me, let me go.' They assured me nothing bad will happen to us. We stopped somewhere for 10 minutes. They blindfolded me again."

Finally, they got them out of the car and told her to sit down, after she had taken only 10 steps.

When her blindfold was removed, she found herself in a bare room.

"They took a picture of us, a picture of our passports. We waited there, and then they separated me and my husband, put us in separate cells. In the morning, they said: 'Madam, be ready in one-and-a-half hours, we'll take you.'"

She was handcuffed and blindfolded again. The next time she opened her eyes, she was at the Dubai Airport.

Öztürk said her husband told her by phone he was tortured in the cell for 52 days.

They forced him to hurl abuses at President Recep Tayyip Erdoğan on videotape.

"He was beaten up a lot for not talking and subjected to torture. They placed iron rods on his back and dunked him in cold water. Three days later, they took him to a room. There was someone there who spoke Turkish who was one of them. They brought a map in front of him, and said: 'Show us, tell us about America, Qatar, Turkey, Syria'. He said he was a civilian and did not have any answers. They said: ‘There's a Train, Equip project in Qatar, did you attend it? Tell me about the training there. How do people get there? How is money transferred from Qatar to Turkey?'."

"They kept asking him about a woman from Qatar. How she came to Turkey, how she communicated with the president and his family. When my husband said he did not know anything, they beat him up for lying."

After torture failed, they tried to bribe him.

"'If you say these things about Recep Tayyip Erdoğan, we will shower you with money, your family will be very comfortable,' they said. Then, they set up a fake trial for my husband and sentenced him to 25 years in prison. He was given consular access for a while, but after the pandemic, no one from the Turkish embassy can meet him. He was calling me twice a week, but now the phone calls have reduced to once a month."

She said the prison conditions are awful, with no hygiene kits given to inmates. They also make other prisoners do their dirty work, she said.

"He was beaten by prisoners saying ‘You're a spy'. His condition is not good," she added.

Öztürk said that besides her husband, her son, who was studying in the United States, was also questioned by the FBI.

"We think that this incident happened in partnership with the United States and the UAE. My husband called me one day, he gave me a code, I didn't understand. That was the code for saying ‘bring the boy'. He kept giving me the code, and the last time when I again did not understand what he was saying, he said: 'Get Abdullah's ticket right away and bring him back tomorrow.'"

She got their son a ticket home but he was interrogated by the FBI at passport control.

"They interrogated him for five or six hours, and did not let him board. The next day, the police raided his house, where he was staying with his friends, took everyone's computers and phones. They asked him questions. They said: 'What did your father do, where did he go?'"

"They asked questions about his education. He waited there for one week, and then they said he could leave. They threatened my husband with his son. They said: 'We have your son'. Thank God we brought our child back."

She said the incident had left their family shaken to the core.

"My husband was a kind man. He would send aid to Syria, Iraq, Malawi and (Myanmar's state of) Rakhine. I want this resolved and my husband released immediately."

Relations between Turkey and the UAE have hit an all-time low, as Erdoğan recently announced that Ankara may suspend its diplomatic relations with the Abu Dhabi administration in response to the recent UAE-Israel deal.

Back in August, Turkey’s National Intelligence Organization (MIT) revealed that the UAE, in cooperation with Israel, was going to try and destabilize Turkey, Iran and Qatar. The agency stated that the wanted UAE spy Muhammad Dahlan, who maintains contact with recently established outlets in Turkey, served this cause by channeling funds into certain anti-Turkey media organizations.

Last year, Turkey also revealed that the Emirati spy network had been operating all over the country.