Displaced civilians in northern Syria's camps at risk amid outbreak 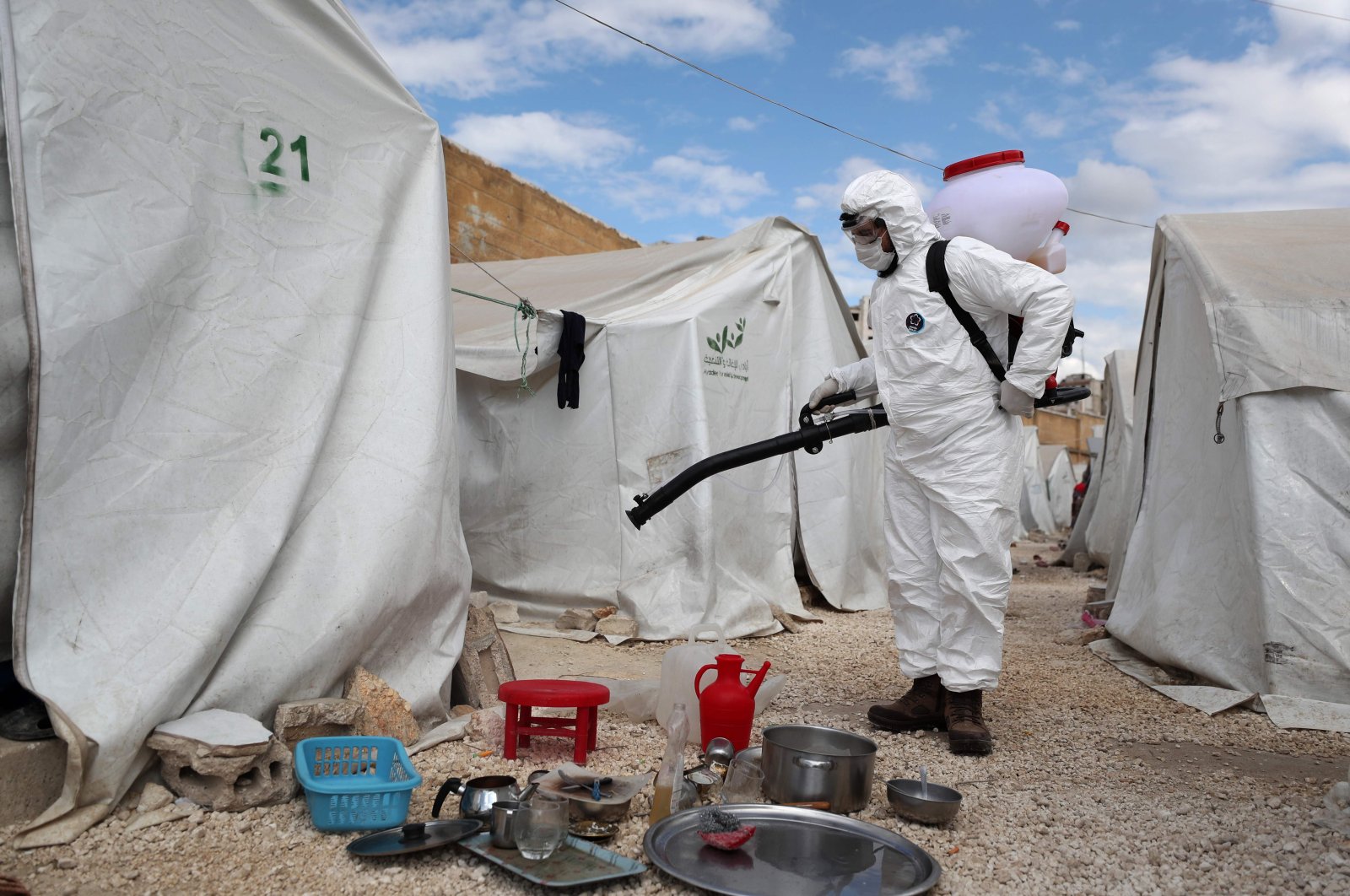 A sanitation worker disinfects a camp for displaced Syrians next to the Idlib municipal stadium in the northwestern Syrian city, Thursday, April 9, 2020. (AFP)
by DAILY SABAH WITH AA Apr 12, 2020 1:02 pm
RECOMMENDED

As the fight against the coronavirus continues all around the world, vulnerable groups, particularly refugees, face greater risk due to the dire conditions at camps, making them potential hot spots for a pandemic. Displaced Syrians top the list of these vulnerable groups due to their large number and the country's collapsed infrastructure and health care system.

"Due to the nearly decadelong civil war, there are many hovels in Syria. These irregular settlements make social distancing impossible and make them vulnerable to plagues," said Erhan Yemelek, the deputy head of Turkey-based Humanitarian Relief Foundation (İHH).

According to Yemelek, there is also the shortage of health care centers, medical equipment and experts. "In case of a possible plague, many civilians living in these areas will be severely affected," he said.

Meanwhile, the Russian news agency, RIA, reported Friday that the Syrian regime has recorded 19 cases in the country.

Despite only a small number of confirmed cases, the virus is likely more widespread than first thought, owing to low testing capacity and lack of transparency.

The Syrian Observatory, a Britain-based war monitor, previously said doctors had received threats from the regime not to disclose cases. "Doctors have been instructed to refer to cases that are suspected to be corona infections as severe pneumonia," said its director Rami Abdulrahman.

Syria's damaged health infrastructure and massive displacement of citizens as a result of attacks by the Bashar Assad regime and Russia make potential containment measures a nearly impossible task.

Speaking to Anadolu Agency (AA), Yemelek emphasized the need for support in the fight against coronavirus especially in the northern provinces like Idlib, Afrin and Azaz where a million displaced civilians are currently living in refugee camps.

Yemelek said it is impossible to maintain social distancing in camps since the tents are positioned too close to one another. There are only four hospitals in the areas hosting 5 million displaced civilians, way above their actual capacity.

"Some measures have been taken by the local administrations in Idlib, Azaz, and Afrin after coronavirus cases started to emerge in the regions under the regime's control. However, the measures being taken with limited resources would not be enough for these regions because, for instance, only in Idlib there are 1.4 doctors for every 10,000 people. Most of these doctors are inexperienced health workers who embraced the profession during the war," he added.

The first kits COVID-19 test kits were sent to northwestern Syria by Turkey, the U.N. and the World Health Organization (WHO) on March 26. Yet, for Yemelek, since diagnosis and treatment are the most critical steps to fight against the outbreak, both the number of kits and medical equipment should be increased.

Testing began "after a shipment of 300 kits reached a member of the WHO health cluster. The first four tests came back negative," the U.N. agency said in a statement last month.

"Some 600 additional tests will reach the laboratory in Idlib tomorrow on March 26, and a shipment of 5,000 tests is scheduled to arrive in Idlib next week," it added.

The cease-fire in northwestern Syria's Idlib was reached in Moscow last month after talks to contain the escalating conflict. The meeting came after regime forces attacked Turkish soldiers and civilians on the ground, causing Turkey to launch a renewed operation in Syria. The cease-fire deal came amid recent clashes between the Turkish military and Syrian regime forces that left many dead on both sides.

Highlighting that they are trying to be prepared for a worst-case scenario, Yemelek said that they will build quarantine hospitals using tents, and if any confirmed cases appear, they will be treated at these hospitals.

"We have been distributing free masks produced at our workshops. We are also disinfecting the camps and distributing hygiene kits that include soaps, colognes, detergent and bleach. In 40 days, 100,000 civilians have benefited from these," Yemelek said, referring to İHH's anti-coronavirus efforts in the region. He added that the measures are being taken by following Turkey's footsteps on the issue. In that respect, schools have been shut down in the region.

Besides tests in the region, Turkey also continues to inform locals of the pandemic and its effects, as well as measures that can be taken to protect themselves.

Turkey's Communication Directorate delivered an Arabic information brochure on Friday to inform Syrians about the virus.

Nearly 500,000 brochures will be delivered in the three regions.

He said patients suspected of infection are being referred to hospitals in Turkey. "After a health check, if there is any potential for COVID-19 infections, patients are being sent to Turkey's Çobanbey Hospital," he said.

At least 10 samples have so far been sent to Turkey from Tal Abyad and Ras al-Ayn.

"So far, there have not been any positive COVID-19 test results. We are happy there is no case in the region at the moment," he said.