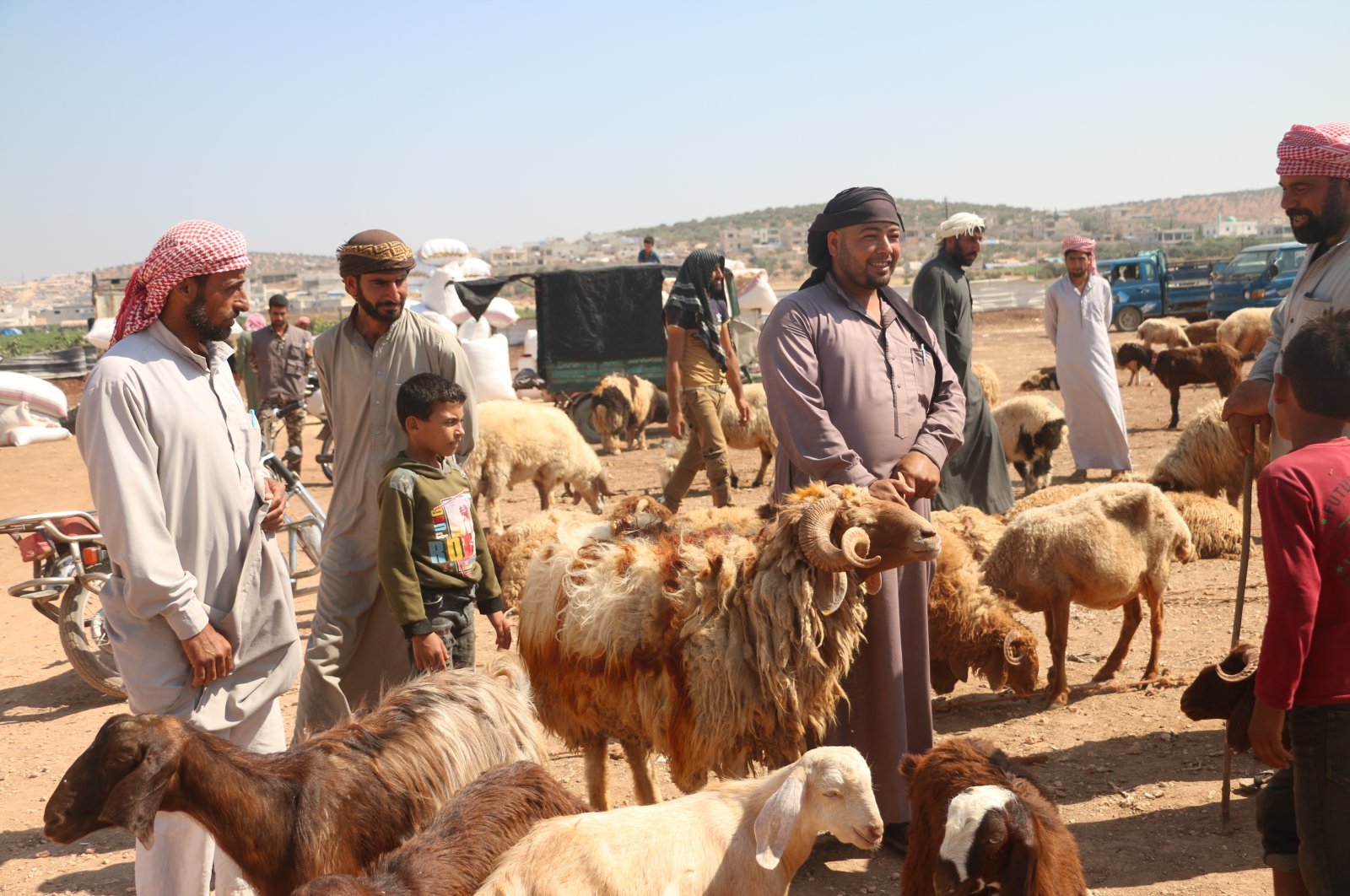 As a sheep waits to be sold for the upcoming festival of sacrifice, or Eid al-Adha, civilians living near Syria's northwestern Idlib face worsening conditions in camps and most are unable to buy an animal to sacrifice, Atmeh camp near Idlib province, Syria, July 27, 2020. (AA Photo)
by DAILY SABAH Jul 27, 2020 12:30 pm
Edited By Dilara Aslan

The displaced people of Syria’s northwestern Idlib province, the country's last bastion of the opposition, are welcoming the upcoming Qurban Bayram with bittersweet feelings as their already tough state of affairs has been rendered all the more difficult with the war-ridden country sliding into an economic meltdown.

Having fled from the Bashar Assad regime’s bombings and attacks, the people of Idlib this Bayram are once more far from their homes even though the Turkey-Russia brokered March cease-fire has partly been providing consolation.

The civilians are now entering their 10th Qurban Bayram under the shadow of a civil war that has been devastating Syria since 2011, when the regime ordered a crackdown on protesting people.

Moreover, with the world focused on combating the global coronavirus pandemic, the Syrian regime has struggled to hold up the economy. After nearly a decade of war, the country is crumbling under the weight of yearslong Western sanctions, regime corruption, infighting, a pandemic and an economic downslide made worse by the financial crisis in Lebanon – Syria’s main link with the outside world.

Due to economic conditions, many Syrians will not be able to make a traditional sacrifice during the festivities. In order to be able to eat meat during the Muslim festival, Syrians await aid from Turkey and the international community.

“We maintain our lives in the camp with a food package coming monthly. The prices of sacrificial animals are too high this year. People cannot even eat chicken this year, let alone lamb,” Naser Jdeideh, who sought refuge in a camp near Idlib, told Anadolu Agency (AA).

Another civilian, Nour Al Mousa underlined that the situation for civilians worsens every year. “One animal is about TL 2,500. No one here can make a sacrifice under these prices,” she said.

She added that many people had not eaten meat for months and that their only wish was for the war to end.

In regime-held areas, prices go up several times a day, forcing many shops to close, unable to keep up with the chaos. In the past few weeks, the Syrian currency dropped to a record 3,500 pounds to the U.S. dollar on the black market – compared with 700 at the beginning of the year. Some staples such as sugar, rice and medicine are becoming hard to find.

Syria's war has devastated the country's economy since 2011, plunging 80% of its people into poverty, according to the United Nations. Despite relative quiet in the country's remaining battlefields, 2020 has only seen the situation worsen.

Bread prices increased nearly 60% in the opposition-held northwestern province of Idlib, even though the territory with a population of over 3 million is not included in the new sanctions. Its population, many of them unemployed and living in camps for the displaced, have also been hit hard by the collapse of the pound since it is the main currency used in Idlib.

The situation of the people in Idlib worsened when the Assad regime, backed by Russia, launched an offensive on the province in December, causing the largest one-time displacement in the history of the Syrian civil war and a huge humanitarian tragedy, according to the U.N.

“People do not have money for bread, how can they buy an animal for sacrifice?” said Hassan Assaf, a farmer who also sells livestock.

The camps in northwestern Syria are densely overpopulated. There is an insufficient amount of relief entering, and the health and education sectors struggle to provide basic services.

In order to ease conditions in the region, Turkish humanitarian agencies regularly provide aid to Idlib, with an emphasis on building houses for refugees now living in camps.

Even though nongovernmental organizations, the United Nations, and Turkish institutions and relief organizations are struggling to meet the needs of the many civilians in the war-torn country, in the face of the new coronavirus threat, aid has been reduced to insufficient levels. In a situation where even the most developed and modern countries are desperate in the fight against the virus, it is hard to expect a country with almost no standing hospital and where children cannot find water to wash their hands to cope with the threat. Only half of the countries’ medical facilities are still operating.

Turkey and Russia, which back opposing sides in Syria's war, agreed on March 5 to halt military activity in the northwestern Idlib region after an escalation of violence displaced nearly a million people and brought the two sides close to confrontation. The deal addresses Ankara's main concerns, stopping the flow of refugees and preventing the deaths of more Turkish soldiers on the ground.

During Qurban Bayram, the faithful who can afford to are highly advised to slaughter animals for sacrifice, from sheep and cows to camels, and distribute the meat to those who are in need. Embracing the spirit of Qurban Bayram, nonprofit organizations in Turkey every year deliver humanitarian aid worldwide and especially in Syria.

The Humanitarian Relief Foundation (IHH) said last week that it has provided 220,000 food packages to the region since the beginning of the year. In addition to supplying food, multiple foundations, including the IHH and some Turkish politicians, are constructing briquette houses in the region. The Beşir Foundation erected 180 briquette homes in Idlib that will provide better living conditions for the Syrian families who previously had to survive in makeshift tents.