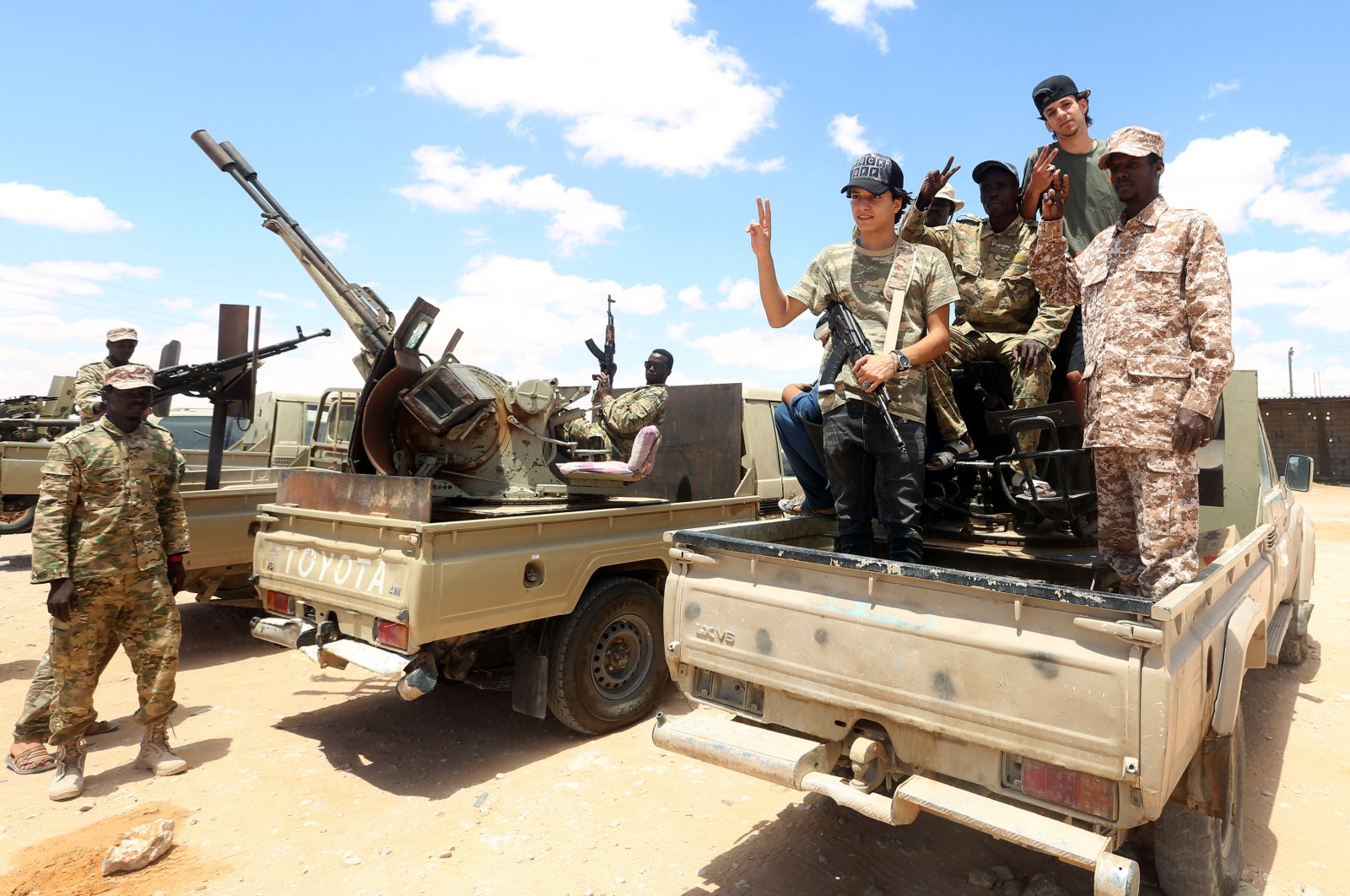 Fighters loyal to the UN-recognized Libyan Government of National Accord (GNA) secure the area of Abu Qurain, half-way between the capital Tripoli and Libya's second city Benghazi, against forces loyal to Khalifa Haftar, who is based in eastern Benghazi, July 20, 2020. (AFP Photo)
by DAILY SABAH WITH AGENCIES Jul 21, 2020 12:15 pm
RECOMMENDED

The move by the parliament could escalate the spiraling war in Libya after el-Sissi threatened military action against the oil-rich country's legitimate government, which is backed by Ankara.

El-Sissi has called the strategic coastal city of Sirte a “red line” and warned that any attack on the city, which sits near Libya’s main oil-export terminals and fields, would prompt Egypt to intervene to protect its western border.

Turkish-backed forces, allied with the U.N.-recognized Government of National Accord (GNA) in capital Tripoli, are mobilizing on the edges of Sirte and have vowed to retake the Mediterranean city, along with the inland Jufra air base, from rival forces commanded by putschist Gen. Khalifa Haftar based in the east.

After a closed-door session in Cairo, Egypt’s House of Representatives, which is packed with supporters of el-Sissi, approved plans to send troops to “defend Egyptian national security in the strategic western direction against the actions of armed criminal militias and foreign terrorists."

The size and nature of the military deployment were unclear.

Libya was plunged into chaos when a NATO-backed uprising in 2011 toppled longtime dictator Moammar Gadhafi, who was later killed.

Haftar is mainly supported by Egypt and the United Arab Emirates (UAE) which have provided his forces with critical military assistance. Russia has also emerged as a key supporter of Haftar, sending hundreds of mercenaries through Wagner Group, a private military company.

On the other hand, Turkey is the main supporter of the Tripoli government, which is also backed by the wealthy Gulf state Qatar.

“Egypt will spare no efforts to support the sister Libya ... to overcome the current critical crisis,” the Egyptian presidency said in a statement after a meeting of the National Defense Council on Sunday that was chaired by el-Sissi.

Egypt has been under pressure to act since the collapse this spring of Haftar’s 14-month campaign to oust the GNA from the capital. Tripoli forces drove Haftar's self-styled army from the capital's suburbs, several western towns and a key air base.

The string of victories provoked intense fears in Egypt, which sees a Turkish presence on its porous western border as a threat. Relations between the countries have steadily deteriorated since 2013, when el-Sissi led the military overthrow of Mohamed Morsi, the first democratically elected president of Egypt.

Egypt’s state-run Al-Ahram daily reported on Sunday that the vote in parliament was intended to mandate el-Sissi to “intervene militarily in Libya to help defend the western neighbor against Turkish aggression.”

Libya’s east-based parliament, which supports Haftar, urged Egypt to send troops. Last week, el-Sissi hosted dozens of tribal leaders loyal to Haftar in Cairo, where he repeated that Egypt will “not stand idle in the face of moves that pose a direct threat to security.”

The U.S. has sent mixed signals to the rival sides over the course of the war but has become increasingly concerned about Moscow’s growing influence in Libya, where hundreds of Russian mercenaries backed a failed attempt by Haftar’s forces to capture Tripoli.

Shortly before the vote, el-Sissi and U.S. President Donald Trump spoke by phone.

"The two leaders affirmed the need for immediate de-escalation in Libya, including through a ceasefire and progress on economic and political negotiations," the White House said in a statement.

Later in the day, Trump also spoke with French President Emmanuel Macron on ways to de-escalate the situation in Libya, the White House said.

The conflict in Libya "has been exacerbated by the presence of foreign forces and arms," the statement said.

Despite Egypt’s efforts to escalate the violence and chaos in the region, U.N. and Libyan officials Monday discussed resuming political dialogue, according to a U.N. statement.

Stephanie Williams, acting head of the U.N. Support Mission in Libya, and Khalid al-Mishri, head of Libya's High Council of State, met via a videoconference call.

The two addressed "possible ways to resume the political talks as per Berlin Conference conclusions," a statement by the U.N. Support Mission in Libya said.

Williams pushed the warring sides and their foreign backers to pull back from the brink, “to spare the 125,000 civilians who remain in harm’s way."

On Sunday, Algerian President Abdelmadjid Tebboune said there are certain efforts by his country for a solution in Libya.

In January, a conference took place in the German capital Berlin in order to start a political process and reach a permanent cease-fire in Libya. Global powers and regional actors expressed commitment to support a cease-fire, respect the arms embargo and support the U.N.-facilitated political process.